Language refers to a system of communicating ideas, sensations, and emotions to other people. Language enables 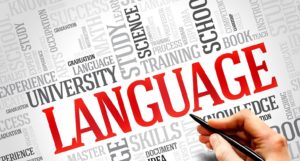 individuals to utilize the imaginative center of the brain to create a scene or an idea to be communicated to other people. Language is usually associated with humans. It is a way of encoding concepts and communicating it through speech or gestures.

People can receive and at the same time transmit identical signals to pass a message that would be understood by the other party. In this case, the speaker and the listener can take turns in communication. This ensures that everyone is in a position to perform their interlocutory roles appropriately.

The language signals fade rapidly. As such, they are temporal. In this case, humans are required to receive and interpret the message received especially at the time it is uttered. This is because the language signals are irrecoverable.

The concept of specialization is necessary for the human language since it allows humans to receive and interpret the messages received especially at the time they are uttered. Specialization ensures that the language signals do not fade away rapidly. Specialization ensures that humans understand the language signals that they receive and transmit. In this case, humans find it easy to watch their actions to ensure that whatever they are relaying is what they intended to express. The concept of specialization differentiates human from non-human communication since the language signals relayed are actionable. On the other hand, non-human communication is intentional. For instance, the owner of a dog would quickly know when it is thirty, in particular through panting.

Children acquire language through learning and stories that they are told at a tender age. Children have complex cognitive structures that allow them to seek changes in their environment, and this promotes their intellectual development. Most children are egocentric, and they quickly adapt to their environment. Most of them learn from what they hear and see. As such, they can learn language from their parents and the people who they interact with at the early stages of development.

Understand The Process of Translation Methods with Examples and Levels