Othello is one of the most prominent and treasured works of William Shakespeare. The theme of Othello is simple, and the plot is sharply defined and is conceded as Shakespeare’s greatest tragedies. Othello is the protagonist and is the most protuberant general of Venice city, and Iago is the evil antagonist who manipulates Othello. Othello appoints Cassio to the position of lieutenant and Iago is envious and wants to take the place of Cassio as lieutenant of Venice. Iago plots against Othello based on the acuity of his weakness and flaws and makes him fall prey to his evil and malevolent plans. He sprains Othello against his wife, Desdemona, who is the daughter of Brabantio. Iago manipulates Othello’s flaw that is jealousy and poor judgment about people to such an extent that he kills his wife. Emilia, Iago’s wife later speaks the truth about the malicious plan of Iago. Othello in a fit of fury bouts on Iago and he gets injured. Then he kills himself because of the guilt and agony for the loss of his beloved wife. Iago attacks Emilia to kill her for spluttering out the truth about him. He is halted by Cassio and gets arrested for his vindictive crimes.

A.C Bradley said ‘’ the plot constructed by Iago is the portrayal of his character in action’’. Iago is evil and spiteful. He carves out a catastrophic plan to ruin Othello because of his reprisal and abhorrence. Iago converses at various occasions and shows his lethal and severe hatred for Othello. Iago is portrayed as a powerful villain who holds the majority of the lines, double as compared to the protagonist or the tragic hero. Iago is smart, astute, cunning and manipulative to the extent that he deceives almost all the characters, including the protagonist Othello, Desdemona, Brabantio, Cassio, Roderigo and Emilia. A.C Bradley said ”Iago is a man of utmost intelligence, and he carves out a plot on his insight about Othello and succeeds in it, otherwise he would have failed”. 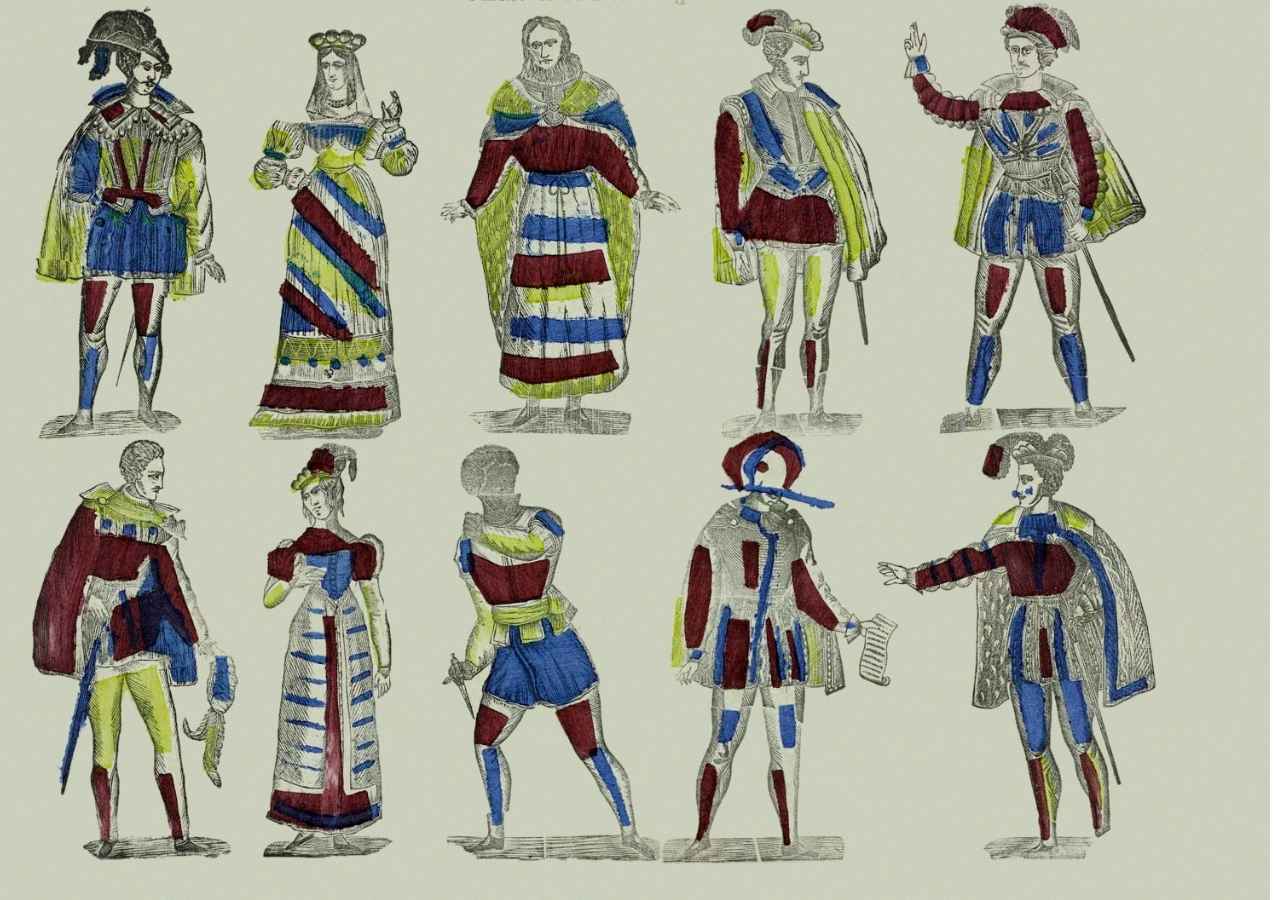 Othello, on the other hand, is humble, gallant, extravagant and gullible but as a tragic hero, his hamartia or tragic flaw is jealousy, misjudgment, imbecility in understanding people like Iago. He is portrayed as a victim of Iago’s malicious intellectual preeminence. Othello is a moor, and Iago manipulates his insecurity. Othello said ‘’Happy I am black’’ (Act 3, Scene 3, Line 267). Othello is portrayed as a humble but a person of weak intellect as he falls to all the evil tricks of Iago. Othello has a credulous nature. He trusts Iago at various occasion during the war and when he taints Othello’s mind against Desdemona to fulfil his evil means. Othello thinks of Iago that he is an honest man. Othello in a conversation with the Duke says ” A man he is reliable and trust” (Act 1, Scene 3, line 285). It is dramatic irony as Iago is a mastermind of evil and a manipulator. Othello is not as intelligent as the other Shakespearean heroes (Albert Gerard).

A.C Bradley said that ”Iago’s character is s perfect representation of the mastery of the evilness and no other work has yet achieved this mastery” (Shakespearean Tragedy, 1926, 207). Iago is more pretentious and evil than Milton’s Satan because even Satan, at times, felt guilty and pity for his dupes. Even Mephistopheles has Iago as his father when it comes to vengeance and hatred (Ibid, 208).  Iago reveals his revenge and malicious intentions against Othello at the beginning of the play. He divulges his contempt when he tells Roderigo that ”I follow him, to serve my turn upon him”. He pretended to serve Othello so that he could delude Othello in all possible ways. He portrayed himself as a reliable and courteous friend of Othello, but in reality, he was plotting against Othello.

Iago’s initial plan was to destroy marriage by opining Brabantio that Othello has abducted his daughter. But Iago fails in his plans as Othello cogently unveils to the Duke of Venice about his love for Desdemona. Desdemona’s father said to Othello that ‘’ She has deceived her father, and may thee’’ (Act 1, Scene 3, line 287).  Othello did not know anything about Desdemona. Othello said about Desdemona that ‘’ She loved me for the dangers I had passed, and I loved her that she did pity them’’ (Act1, Scene 3, line 166-7).

Later when the Duke sends them to Cyprus Iago carves out a perfect plan to eradicate Cassio from his place as a lieutenant and with that harm Othello. He exploits Roderigo for the accomplishment of his evil plans. Iago is responsible for the downfall and ruin of Othello as he designs a perfect evil plan to make Othello jealous by making him believe that Desdemona is not loyal, and she has betrayed him. Othello is intelligent but not a very intelligent manipulator as Iago; that is why he falls prey to Iago’s evil plans. Later he convinces Othello that Desdemona is betraying him as she loves Cassio. He deceives Othello by telling him that it’s Desdemona’s nature to deceive as she has deceived her father, Brabantio to marry Othello and now she is betraying him because of Cassio. To give his argument a solid ground he says, ‘’ She did deceive her father, marrying you’’ (Act 3, Scene 3, Line 205). Othello at first does not believe him, but later he feels jealous. Othello jealousy makes him fall a prey to Iago evil plan. Iago knows that Othello loves Desdemona and he will feel insecure. He is manipulating Othello by saying that he should not be jealous as jealousy is the root of all the evils. Iago says ” O, beware, my lord, of jealousy; It is the green-eyed monster which doth mocks the meat it feeds on ‘’ (Act 3, Scene 3, Line 15). Iago’s manipulate Othello by his very weakness that is jealousy. Iago is portrayed as a vindictive, angry and devious person who wants revenge from Othello for not offering him the lieutenant’s position.  Iago is a man of outright intellect but a very evil, vindictive and spiteful mind.  Iago is more malicious than Milton’s Satan and even worse than Mephistopheles as both the Satan and Mephistopheles would feel the guilt about their sins.

Iago continues to corrupt Othello’s mind for Desdemona. Othello gets angry and starts creating false imagery of Desdemona kissing Cassio. Othello said ‘’ Lie with her! Lie on her! We say lie on her when they belie her. Lie with her! That’s fulsome. Handkerchief, confessions, handkerchief!” (Act 4, Scene 1, line 34-37). Othello falls prey to Iago’s evil plan. Jealousy is an evil that destroys Othello’s life.

In the beginning, Othello is portrayed as a very humble, generous and calm person. But because of jealousy, he becomes revengeful. In the beginning, he loves Desdemona, but because of Iago’s evil plans, he decides to kill her because he thinks she betrayed him for Cassio. Othello is very trusting, and he believes everything Iago says about Desdemona without asking for proof. When he saw that Desdemona lost the handkerchief, he does not ask for evidence; instead, he believes that Iago will not lie to him. Othello becomes so rancorous that he asks Iago how he to kill Cassio. Othello said, ” How should I murder him, Iago” (Act 4, scene 1, line 170). Iago further manipulated him by saying that Cassio was laughing when he saw the handkerchief. ‘’the foolish woman your wife! She gave it to him, and he hath given it his whore” (Act 4, Scene 1, line 176-177). Othello thought that Iago was his only loyal fellow; he was not capable of understanding Iago’s evil nature. He falls prey to his evil plan and kills his wife. The noble and generous Othello killed his wife because of jealousy and misjudgment about Iago as an honest man.

Later, Emilia reveals the truth about Iago. Emilia said ”upon my soul, a lie, a wicked lie!’’ (Act 5, Scene 2, line 180).  Iago a man of corrupt nature who manipulated Othello and destroyed his life to feast his hatred and vengeance keep on denying. Iago said “I told him what I thought” (Act 5, Scene 2, line 176). Albert Gerard said ” Othello is an erring barbarian”. The reason why Gerard calls him is that he is sad because he thought that his wife had betrayed him, but he is merciless because he killed his beloved wife. But later he regrets his decision and kills himself. Because he was unable to bear the agony. Othello feels heartbroken, and his heart aches because he killed his wife, who was loyal to him. His poor judgment and jealousy left him all alone. Iago manipulated Othello by preying on his weakness and insecurities. Othello later dies of the cause. A.C Bradley remarks that ”Othello is a hero who has no faults, but his strengths turn against him”. Gerard calls Othello a gullible fool. Othello acts according to Iago’s plans. He falls prey to his evil and spiteful nature.

A.C Bradley rightly remarks that Iago is a man of evil intelligence. He should be held accountable for Othello’s downfall. Othello is a tragic hero, and his flaw draws misery in his life. He suffers due to his poor judgments and jealousy. His trusting nature makes him vulnerable, and he gets betrayed by Iago. He loves his wife Desdemona but kills her in the end because of false evidence. Iago is a bright, cunning intellectual soul capable of polluting Othello’s mind. Othello falls prey to all Iago’s deadly plans. Iago’s intelligence brings catastrophe to Othello’s life.  Othello loves his wife, Desdemona, at the beginning of the play. He is portrayed as generous, noble, gullible and a man of passive nature. Othello’s trusting nature brings him down and which leads him to make a wrong decision and draws him towards his tragic end. Othello though is a protagonist, but he is vulnerable to the evil. Hence it is righteous to say that Othello is the simplest of all the Shakespearean play/dramas, and Iago is the most intellectual villain of all the Shakespearean plays. The villain brings about the downfall of the protagonist by his evil intelligence, vengeance and wrath.