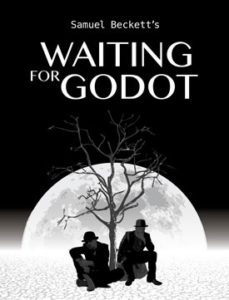 as an instrument for the communication.

In a meaningless universe, it is always foolhardy to make a positive statement. Ten different modes of the breakdown of language have been noted in play. They range from simple misunderstanding and double intendres to monologues, (as signs of inability to communicates) cliché’s  repetitions of synonyms, inability to find the right words and telegraphic style of language (loss to grammatical structure), to luckys’ farrago of chaotic nonsense and dropping of punctuation marks, such as question marks, as an indication that language as lost its function as a mean of communication.

Waiting for Godot can also be regarded as a play that have meaningless language, because neither it makes a (considerable) use of dream and fantasy nor it employs conscious poetic language.

“Nothing happens, nobody comes, nobody goes it’s awful”.

There is no exposition, complication, climax denouement and resolution. The play does not have any cathartic effect, language shows incompleteness of everything. Language is as blank everywhere, that even the and of play could be beginning of any act and so on. There is no perpetuity that can feels through language:

In play, the use of language probes the limitations of language the both as a means of communication and  as a vehicle for expression of valid statements, an instrument of thought. His use of dramatic medium shows that’s he has tried to find means of expression beyond language.

On the stage one can dispense with words altogether, or at least one can reveal the reality behind the words, as when the action of the character contradict their  verbal expression.

“Let’s go” say the two tramps at the and of each Act of waiting for Godot, but the stage direction informs as that “They don’t move”.

On the stage language can be put into such a relationship with action that facts behind the language can be revealed. Becket’s use of stage is an attempt to reduce the gap between the limitations of language and the sense of human situation he seeks to express inspite of his strong feeling that words as inadequate to formulate it.

Language in Becket’s plays serves to express the breakdown of language. Where there is no certainty, there can be no define meanings and the impossibility of ever attaining certainty is one of the main themes in plays for instance in play, the conversation between two characters proves vacuity of language.

The first statement in Waiting for Godot is Estragon’s pessimistic conclusion that there is “Nothing to be done and paradoxically, in parts of the play Vladimir and estragon dialogue also shows the blankness of language. The clear example of this sentiment is Vladimir’s statement, “Let us do something” and an other hand. Vladimir refuses to listen to account of Estragon, nightmares saying “Don’t Tell Me” By contradicting each other and by questioning each other is categorical instance of vacuity of language.

So whole list of all given passages robes to show that the play is about the vacuity, of language because on truly logical discussion or exchange of thoughts occurs in its either through loss of meaning of single words or through inability of characters to remember what has just been said. In a purposeless word that has lost its intimate objectives, dialogue, like all action, becomes a more game to pass the time. On the whole it is categorical proved that play is about the vacuity of language.