What is The Difference Between Barrister and Solicitor

The Overlapping Roles of Barrister and Solicitor

There are two kinds of lawyers in modern Britain — the barrister and the solicitor. The split of the two legal professions have always caused some confusion in terms of its legal roles, functions, and training. This article highlights the distinct fields of why solicitors and barristers are distinct, evaluate the differences between the two legal professions, and draw my conclusion from this evaluation if there is still a need for legal separation between the two professions.

Who and What is a Barrister

A barrister is a member of the legal profession who was named ‘ the Bar ‘. They argue their cases before the court and also serve as legal counsel or advisers to their clients with the help of their solicitors. Up until 1990, barristers have the exclusive right to argue their cases in court, but now, this law has been revoked and solicitors, in some cases, are allowed to perform this role as well. To be eligible for the title of barrister-at-law, students must pass the qualifications and standards set by the Council of Legal Education and is only restricted to the Inns of Court. By paying a fee, students are summoned to the Bar. For a year, they have to become apprentices in the chambers of practising barrister. Before presenting a case in court, barristers are usually aided and instructed by solicitors regarding their cases. Since 1989, and from the beginning of 1990, many changes to the legal proceedings have been introduces to cut back on litigation costs—one of which is that barristers could present their cases in court without their instructing solicitors in some cases. The law also states that barristers could not be sued by their clients for negligence in presenting their case in court and likewise, cannot sue their client for unpaid fees (“barrister”).

Who and What is a Solicitor

The solicitor on the other hand is a person who practices law before the supreme court of judicature. Solicitors are the ones who argue cases before a judge. They are considered as officers of the court. They also serve as mediators between barristers and their clients, who act as negotiators in terms of fees and in preparing for the case before going to trial. In some cases, solicitors are allowed to take the place of barristers in the lower courts; and in 1990 where conferred the rights of audience in higher courts. Solicitors also “have a monopoly of certain legal business and are subject to court regulation.” The qualifications, trainings, and standards to become a solicitor is set by the Law Society which includes, but is not limited to an apprenticeship under a practicing solicitor for at least several years and must be a graduate of law school (“solicitor”).

Despite the very distinct roles and functions that was originally intended to be performed by a solicitor and a barrister, changes in the judicature brought about by the changing demands of time have created some gray areas between the functions and roles of the two legal professions wherein they tend to meet in some areas. 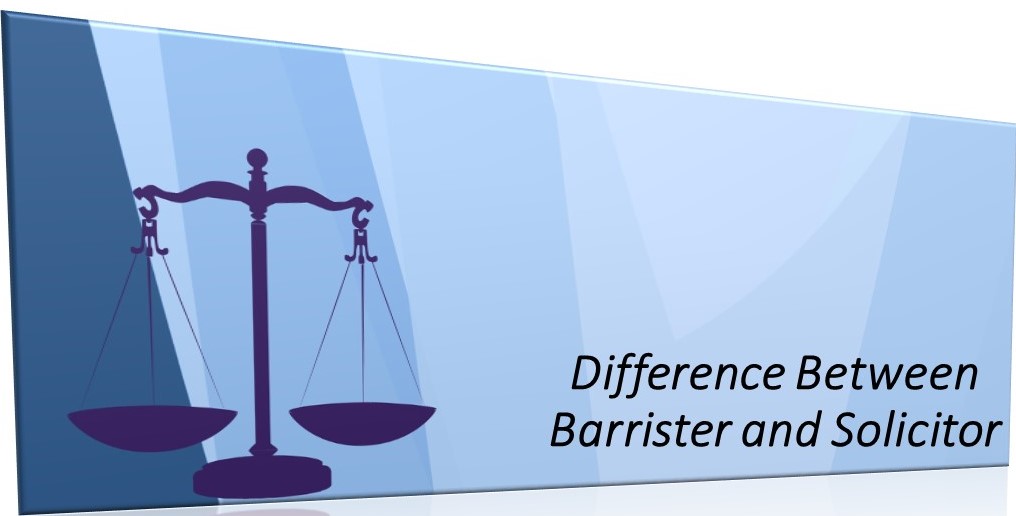 For instance, originally there is a clear cut distinction that solicitors are to handle legal matters outside the court while barristers would be in charge of arguing cases before the court.  The roles are also very separate: the solicitor is the one who gives legal advises to the client and prepares the case for court. After all the legal preparations are handled by the solicitor, the barrister then takes over and brings the case before a judge. Through this process, it is only the solicitor who gets to transact directly with the client. “It is the solicitor who refers cases to a barrister if there is a need for the case to go to court.” In a nutshell, it is under the prudence of the solicitor if the client would require the services of a barrister (“Difference between Barrister and Solicitor”).

If and when a barrister is brought in the case, the client does not transact with him/ her directly. Rather, the client transacts with the solicitor and it is the solicitor who instructs the barrister in behalf of the client. This also means that solicitors are mostly in contact with clients and are often times barred from court while the barrister on the other hand has minimal or no dealing with clients but spends most of his time placing his arguments inside the court (“Difference between Barrister and Solicitor”). In this case, the main differences in a way boils down to fields of specialization. However, such distinction is not so clear-cut anymore as amendments to legal proceedings have been introduces to cut back on litigation costs. Some roles and functions of solicitors and barristers are assumed by either/ or of the two parties.

Despite the many commonalities shared by barristers and solicitors, particularly in their required academic training, work experience, and professional qualifications, there are still significant differences between their functions. “A barrister goes into court and fights whereas a solicitor’s job is mainly paperwork and advice members of the public when needed. Applicants are a connection to barristers, but some experts can directly approach a barrister. This is the principal distinction between the two jobs” (Afzal).

But despite these differences in their functions, I believe that continued separation of the two is no longer relevant to the demands of the modern-day legal proceedings. I believe that the law should be more flexible and it has proven itself as such when it amendment its laws and allowed some allowable functions to be shared by the two legal professions. I think it is just a matter of progressive changes. Change process takes time, and I believe that the continued separation would soon be obsolete because there would no longer be any need for a separation between the two. The more important question would rather be a matter of field of specialization.