The Quest for Electoral Reform

Thesis: Although analysts and Canadian politicians agree that a revision of the electoral system is needed, they disagree with the solutions that seek to solve the problems.

i). Proponents for reform argue that the fist-part-the-post promotes; 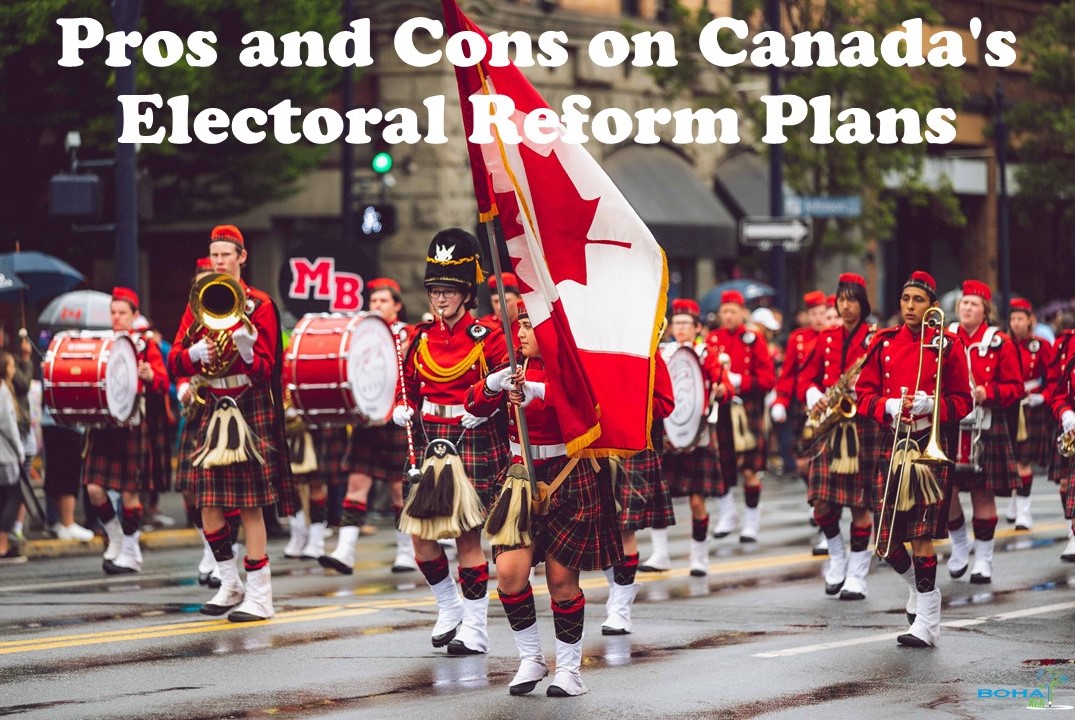 Proposals on Canada electoral reform have sought to address concerns on political representation. In the recent past, pundits and politicians have engaged in debates, which have sought to address democratic deficit. Critics have noted voting trends that are alarming. For example, 1997 and 2000 federal elections, it emerged, that the number of citizens who did not vote exceeded the number that voted the winning party (Tanguay 5).  This is among the paradigms that the proposals on electoral reforms have sought to address. Although analysts and Canadian politicians agree that a revision of the electoral system is needed, they disagree with the solutions that seek to solve the problems.

A growing number of Canadians believe that FPTP electoral system is inherently unfair because it fails to reflect the wishes of the voters. In addition, Canada inherited the system from the colonial master. In the system, the colonialist had instituted it in order to serve his own interest at the expense of the colonized. In comparison to the FPTP electoral system, the advocates of electoral reform note the following. First, the system gives the first contender an electoral bonus that translates the largest votes casted into legislative majority. In essence, it gives power to the winning party at the expense of the majority citizens. While the elective process provides the opportunity for the winner to assume responsibility, many citizens believe that the side that did not win should also have a chance to participate in the development agenda.

Second, the FPTP system promotes regionalization, which makes the citizens to build various perceptions about some provinces of the country. For instance, West is either Conservatives or Reform and the Ontario is a liberal bastion (Tanguay 4). The divisions that emanate from principle views of the political system should not create regionalization. It is arguable that a given region may vote the winning party or the opposition party. However, not every individual in the region voted for these two positions. In this sense, regionalization deprives the democratic gains. A voter has a choice; however, the choice should not determine the region where the voter should belong.

Third argument about the FPTP is system is that it allows the governing party to dominate the political sphere for the four-year period, which creates marginalization in parliament. The citizens and the critics of this system believe that other political representatives should address their concerns in the parliament (Stephenson & Tanguay 8). On the contrary, this seems not to be the case, politicians representing the opposition interest seems to lie in the cold while the mainstream politicians address issues in the parliament. The forth argument against electoral reform is that the politicians constituting the House of Commons does not reflect on the voters choice. Ideally, citizens vote in order to send a representative who can address their concerns. However, lack of representation in the House of Common shows that the voting process wasted a large a big number of votes casted if the constitution of the House of Common does not reflect the voters’ interest.

The firth argument, which calls for electoral reform, is that FPTP electoral system does not accommodate new voices from other parties. While candidates campaign for the elective positions, they tend to spell out their intentions once they ascend to the intended positions. This means that a legislature should have the opportunity to address the concern of his or her constituents. Conversely, when the legislature fails to secure a chance to address the concern of his constituent or contribute debates about various development policies, it would appear that the community he or she represents is not party to the policy in question.

The sixth call for electoral reformation argues that the FPTP electoral system has artificial barriers. These barriers block women, aboriginal candidates and the minority from active political participation. Proponents for democracy believe that the society should promote interest of the entire community. Thus, women and other groups, which belong to the special category, should have a say on the development processes that the nation intends to undertake. Surprisingly, when system does not offer an opportunity for the special groups to participate, the concern of these communities seems not to be part of the social agenda.

Although the proponents of the electoral reform have sited various points against the FPTP electoral system, the defenders of the system believe that it has various important provisions for the Canadians. Largely, the argument that both groups tend to flout is that the reform should combine issues affecting the two sides of the divide i.e. combining the features of the FPTP system the demands made by the proponents of reformation. The proponent of the electoral reform proposed the introduction of the Mixed Member Proportional electoral system. According to the system, the single member constituency, which is a common feature in fist-past-the-post system, would reduce its number by a third. In addition, it would introduce 106 compensatory seats to parties according in accordance with their share of vote at the provinces (Stephenson & Tanguay 8).

Critics of the system Mixed Member Proportional Electoral System observed that the system would require a vote to posses two voters card (Stephenson & Tanguay 6). The proponent of the system also observed that it would create a regional balance in the parliament. Argument flouted for the opposition of the system indicated that the system was complex for the average voter. Another feature that the system would introduce is the coalition government, which the opposition noted would create castes of MPs thereby creating room for the extremist parties to spread. In the mixed member proportional system, the small parties have time or the opportunities to address issues that they feel affect the communities that they represent.

Another issue raised against mixed electoral system is that it would inevitably create two parliamentary representatives, which are different. Canadian politics seems not to have provisions that can accommodate the above system; however, evidence from New Zealand and Germany show that politicians can burry their political party inclination and work towards the future of the nation (Tanguay 7). The centre of interest seems to be a crucial factor that haunts the electoral reformation process. Large the process entails letting go some traditional systems. It is also evident that the European countries, which have often indulged in coalition government, not show any instability. Since the requirement for the mixed member, proportional system offers opportunity for the parties representing provincial interest to have a stake in the House of Common some people fear that the two positions for representation created would impede political prosperity.

It is observable that mixed member proportional system creates opportunity that leads to the election of the minority parties (Tanguay 7). The reform does not only seek to influence the traditional system used in representation, but also influence the meaning of voting. In the past, majority of Canadians have ignored exercising their right to vote because of the representation pattern that fails to incorporate the interest of all voters. Analysts believe that the coalition government that stems from the mixed member proportional system does not produce a system where the government would fail to make effectives policies (Law Commission of Canada 14). In addition, Canada is in a better position of imitating the New Zealand system because it is functioning. It is evident that many politician traded arguments against and for the mixed member proportional system; however, the referendum revealed that the society was ready to make changes.

In conclusion, the FPTP electoral system did not promote inclusive representation of the voters. Conversely, this attribute subjected the voters to the following political trends regionalism and unfair representation; it created artificial barriers, which locked the minority from fair representation. The proponent of the reform sought to translate the FPTP system with a system that would bring all the parties. Arguments sited in rejection of the mixed member proportional indicated that it would lead to coalition system, the process was complex to the voters, and that the coalition government would fail to enact policies. Although the arguments against the mixed member proportional system tend to focus on shortcomings that the politicians are likely to face in future, the system provides an opportunity to the minorities in the social. Reform in the political system (electoral reform) should iron issues, which hampered the growth or development of a given region.