Thermal Stress and the Heat Shock Response in Microbes

Types of Microbes on the basis of Temperature

There are three types of microbes on the basis of temperature:

Organisms that are capable of growth and reproduction in cold temperatures, ranging from −20 °C to +

10 °C. They can be isolated from tundra or polar caps

Organisms that grow best in moderate temperatures  between 20 and 40 °C. Their optimal 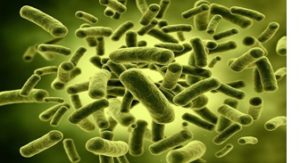 temperature is 37 °C. Habitats of mesophiles include cheese, yogurt  animals and humans.

“The stress induced in the body of microbes due to high temperature is called thermal stress.” 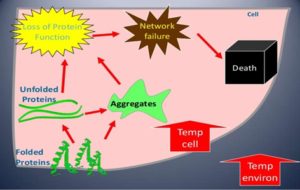 This is a ubiquitous protective and homeostatic cellular response cope with heat-induced damage in proteins. Upon a shift from 30◦ to 42 ◦C bacteria transiently increase the rate of synthesis of a set of proteins called heat shock proteins (HSPs).

Among the induced proteins are:

There are two types of heat shock responses:

Periplasm: While periplasm  lacks ATP, oxidizing and in contact with the external milieu.

Optimal cell growth requires that the cell senses and responds to changes in these disparate sub cellular compartments. Stress responses in E. coli and S. typhimurium are compartmentalized into cytoplasmic and extracytoplasmic response

Sigma H protein can be regulated at 3 levels

Regulation of σᴴ at Translation:

Regulation of σᴴ by degradation:

The mechanism regulating proteolysis centers on whether σᴴ associates with RNA polymerase. During growth at 30 ◦C, σᴴ can be degraded by several proteases including FtsH, HslVU, and ClpAP. If σᴴ is bound to RNAP, σᴴ is protected from degradation. The cell uses the DnaK-DnaJ-GrpE chaperones  to interact with σᴴ at low temperature, sequestering σᴴ from RNA polymerase. Failure to bind RNAP facilitates degradation of the σ factor.

Upon heat shock, increase in the number of other unfolded or denatured proteins occur that can bind to DnaK or DnaJ. This reduces the level of free DnaK/DnaJ molecules available to bind σᴴ, allowing σᴴ tobind RNAP, which protects σᴴ from degradation. When cell reaches the adaptation phase following heat shock, the levels of DnaK and DnaJ rise (both induced by σᴴ) and can again bind σᴴ, redirecting it toward degradation. 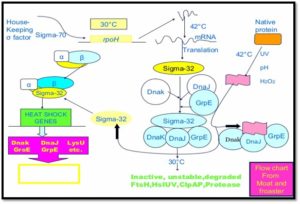 Regulation of σᴴ  at transcription:

In addition to translational and proteolytic controls, production of σᴴ is regulated at the transcriptional level via a feedback mechanism. There are four promoters driving rpoH expression. Three of which are dependent on σ70, the housekeeping σ factor. The gene encoding σ70, rpoD, is also a heat shock gene induced by σᴴ. So, increased production of σᴴ increases σ70, which increases transcription of rpoH. The fourth rpoH promoter is recognized by another σ factor, σᴱ, encoded by rpoE.

The heat shock response is also triggered by a variety of environmental agents as;

Induction by all of these stimuli occurs through σᴴ. How can all of these diverse stresses activate rpoH? The only explanation that appears reasonable is the accumulation of denatured or incomplete peptides. There is a potential alarmone that has been implicated in signaling expression of this global network. The molecule is diadenosine 5-, 5-P1, P4-tetraphosphate (AppppA), which is made by some aminoacyl–tRNA synthetases (e.g., lysU) at low tRNA concentrations. How this may influence the response is not known.

These pathways are induced by accumulation of misfolded proteins in the periplasmas under stress.

σᴱ is a member of the extracytoplasmic function (ECF) subfamily of σ factors.

In E. coli, σᴱ is responsible for the transcription of genes including:

The gene encoding σᴱ, rpoE, is the first member of an operon followed by the genes rseA, B, and C. RseA is a transmembrane protein whose cytoplasmic C-terminal domain interacts with σᴱ, acting as an anti-σfactor. The periplasmic face of RseA binds to the periplasmic RseB.

Extracellular stress in some way signals increased proteolysis of RseA by the periplasmic protease DegS, thus relieving the anti-σ effect of RseA on σE. It has been proposed that Rse Band perhaps other periplasmic proteins involved in protein folding protect RseA from degradation by binding to the RseA periplasmic domain, capping the target site of DegS.

Stress-induced misfolding of periplasmic proteins would titrate the RseA cap proteins off of RseA, rendering the anti-σ factor vulnerable to attack by DegS. The result would be increased activity of σᴱ leading to increased levels of σᴱ protein and RseA anti-σ (since they form an operon). The increased amount of σᴱ will drive further expression of genes whose products handle the periplasmic damage while the of RseA will enable the cell to down regulate the system once the capping proteins are again free to bind and protect RseA from DegS degradation. 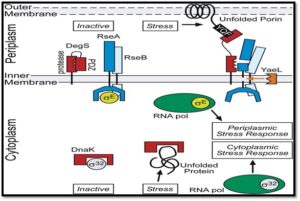 A second system dedicated to protecting the periplasmic perimeter of the cell is the CpxRA two-component system with:

CpxA responds to envelope stress by autophosphorylation followed by phosphotransfer to CpxR. CpxR∼P activates expression of those genes that response to heat shock. 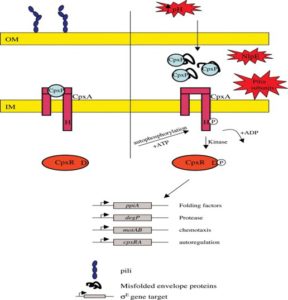