Membrane Emulsification review discusses that The emulsion is a very useful technique to formulate pharmaceuticals, cosmetics, dressings and it also used in food 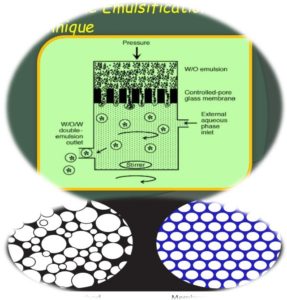 processing. Usually, emulsification is done by colloid mills, ultrasonic or microfluidizers, and high-pressure homogenizers (Sotoyama, Asano, Ihara, & Takahashi, 1999). Choice of preparation techniques is dependent on the application of the resulting emulsion (Friberg, Larsson, & Sjoblom, 2003). Usually, preparation methods use a strong shearing force, which often results in dispersed phase coalescence. These type of emulsions are usually polydispersed and droplet size has great variation.

In the membrane emulsification process, the dispersed phase is allowed to pass through the micro size pore of the porous membrane, with the flow of continuous phase along the membrane. Small droplet produced at pores, when they reach a certain size, they detach from the membrane. The critical size depends on the drag force of continuous phase, the bouncy force acting on the droplet and the pressure. The interfacial forces also define the size of droplet for detachment. Due to interfacial forces, the droplet turns into a spherical shape, it can also produce some distortion caused by the contact angle present between membrane and droplet and this distortion may also due to the flow rate of the continuous phase. The resulted droplet size is dictated by the size distribution of pores in membrane and degree of coalescence (Peng & Williams, 1998).

According to the study of Williams et al. and M. Tomita et al. on different types of the membrane with different nominal pore sizes ranges from 0.05–14 μm, the droplet size can be interrelated with the pore size of the porous membrane. This relation can be described by the following equation.

Here dp demonstrate the mean size of pores of membrane and dd is used for the mean droplet size, where the value of x ranges from 2 to 10 (Katoh, Asano, Furuya, Sotoyama, & Tomita, 1996; Mine, Shimizu, & Nakashima, 1996). If the pore size distribution is narrow than monodispersed emulsion can be produced. Schubert et al. study the SPG membrane of mean pore size of 0.4 μm and 6.6 μm and concluded that droplet size distribution is lower than size distribution in the ceramic membrane (Vladisavljevic & Schubert, 2002). Omi et al. obtained fairly uniform droplet due to the un-uniformity the pore size of SPG membrane (Omi, Ma, & Nagai, 2000).

The porosity of membrane also plays an important role to determine the size of the droplet. Porosity ensures the distance between two adjacent droplets so they do not get so close or in contact. Abrahamse et al. stated that the maximum membrane porosity for coalescence prevention is 1.5% of pore having diameter 5 μm (Abrahamse, Van der Padt, Boom, & De Heij, 2001).

Temperature is also an important factor for emulsification which can affect viscosity and solubility of both continuous and dispersed phase. Whereas more viscous continuous phase will also increase the size of the droplet (Katoh et al., 1997). Often the membrane surface properties depend upon pH so it can also be considered a parameter of emulsification process (Joscelyne & Trägårdh, 2000).

Membrane emulsification is suitable for industrial scale production and the capacity of the system can be easily increased or decreased by changing the quantity of membrane. The membrane can also be recycled and also energy efficient way to produce the emulsion. These are some major properties which make this more feasible for industrial production.

This is a simple and more reliable process for the production of the emulsion. Due to droplet size dependence on pore size make it easier in membrane selection for the typical application. As a conclusion, the membrane emulsion is more sophisticated technology to produce an emulsion of uniform droplet size in now these days.