The Relevance of Certainty to Beccaria Equation

According to Beccaria equation, the law is established to benefit the society and to keep social contract intact. The 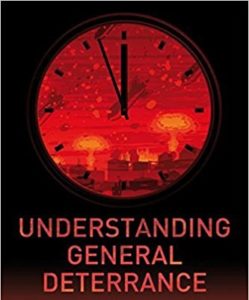 equation considers the existence of a conflict of interest in the society. Crime comes about as a result of the interest of criminals. However, he believes that severe punishment whose effects outweigh the benefits of the crime can dissuade people from committing a crime (Jappah, Jlateh, and Danielle, 2013). As such, he considers crime as an illogical choice.

General deterrence refers to the ability to instill fear among individuals to prevent them from committing a crime (Jappah, et al., 2013). The offenders involved in crime are punished publicly with the primary objective of deterring others from committing crimes of the same nature in the future.  There are three factors of general deterrence that are important to Baccaria equation. They include certainty, severity, and swiftness. I believe that certainty is the most critical factor of general deterrence which is significant to Beccari equation. In criminal law, certainty is the act of subjecting the criminal to a punishment whenever a crime is committed (Matthys, 2010).  When the crimes are punished, the offenders will refrain from committing the same crimes in the future. Besides, other people in the society will be dissuaded from committing similar crimes in the future.  In this way, the individuals are made aware of loses and benefits associated with the crime. As such, they will consult their conscience before committing a crime.

Certainty is the most effective way to control and prevent crime (Matthys, 2010). It has received much attention since people develop deviance attitude when severity and swiftness are applied. The severity of the sanctions applied increases the level of crime. Sometimes the punishment subjected to criminals is swift, but they are not deterred from committing such crimes in the future (Jappah, et al., 2013).  The certainty of punishment is the only effective way that has worked effectively to encourage people to obey the law. In criminology, it is believed that a punishment that is too severe will be unjust to the criminals. Certainty considers cruel forms of punishment as illegal. Such sanctions include and the death penalty. The classical theorists have argued that severe punishment will not prevent people from committing a crime. In most cases, the severity of the punishment does not outweigh the gains received from committing the crime. Certainty promotes determination of guilt and application of the law equitably (Matthys, 2010). Certainty ensures that law is applied in proportion to the crime committed. According to certainty, the seriousness of the crime is determined by considering its effects to the society. Therefore, certainty is the most effective way to control and prevent crime in the society.