Applying Relevant Theories on Justice Against Sponsors of Terrorism Act

On the 28th of September the year 2016, the bicameral parliament reneged the decision by President Barack 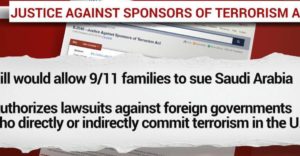 Obama to have Justice Against Sponsors of Terrorism Act become law. The bicameral House initially voted for the bill to be enacted and this was demonstrated by the majority of senators and members of parliament voting for the bill. Ninety-seven senators supported the bill against one who objected it. Furthermore, three hundred and forty-eight members of the lower house favored the bill as compared to seventy-seven who did not favor the bill. The legislators believed that the bill would grant justice to the victims of terrorism and make America safe by preventing terrorism. Moreover, the interests of the USA would be respected internationally and administratively. JASTA was vetoed by the USA president because of the fear that it would have detrimental effects on the relationship of the USA with other nations. This would affect the citizens of the USA in other countries going about their jobs, for example, the diplomatic personnel and the soldiers. The president wanted Americans to go slow on issues of terrorism at the international level. This, however, was dealt a heavy blow because the legislature made up of the two houses had a different position altogether. The legislatures held that it was needless to take a moderate stand on terrorism that affected its partners and people all over the globe. Four hundred and forty-five legislators were in support of radical measures to deal with international terrorism targeting the US while seventy-eight legislators were of the opinion that matter should be dealt with judiciously a position supported by the federal government. This is how President Obama found himself losing on the issue.

JASTA was geared towards giving civil litigants constitutional protection of their entities in different parts of the world. Legislation reigned over the decision that the president made because the legislators were very committed regarding economic and social wellbeing of the friends, citizens, interests and residents of the USA. The legislature held that global terrorism is a big threat to its fundamental interests having been a victim of the year 1782 when it started experiencing external and internal attacks. When Barrack Obama began his reign in the year 2009, America was affected by over thirteen attacks believed to be masterminded by Islamic extremism. Diplomatic centers of the US in other nations have suffered from terrorism attacks. For instance, the American Embassy in Kenya was attacked in the year 1998 leading to the killing of many international workers, Kenyans, and Americans. At the same time the elections were gearing up in the USA, and so the legislators had to confirm to the members of the public that they had a lot of interest on matters affecting them. JASTA was one way through which the legislators would increase their chances of being elected again. Moreover, the USA was keen at evaluating the kind of relationship that it had with Saudi Arabia which had been termed as disrespectful. The Congress believed that the US citizens would overwhelmingly support JASTA.

Vetoing JASTA put President Obama at logger’s heads with the Congress. He was seen as exercising his individual interests while holding public office. This made him be termed as unsupportive when it comes to the administration of justice to the victims. The Congress was very clear on its role to protect prerogatives of the constitution. The Congress played the role of protecting the interests of the USA and the authority of the federal government. Besides, the Congress wanted to prove to President Obama that it was responsible for making of laws that had to be protected and respected by the president. JASTA was seen by the Congress as having the ability to undermine the relationship between the USA and other countries as well as damage its reputation. The president has got veto powers that can be used to make important decisions. However, it is important for the president to consult the Congress. It was not orderly for the president to come up with executive orders that would undermine the Congress. President Obama objected JASTA because it would determine the involvement of other countries in terrorism thereby alienating the federal governments. The courts would be given the power to make a decision on terrorism matters, and this would impact negatively on the USA as the decisions by the courts would rely on incomplete information. It is very hard to prove that a foreign government or its citizens were behind the attacks on the USA. The president affirmed that there is a need by the USA government to play its role accordingly and can only ascertain the involvement of foreign governments in terrorism once intelligence professionals, foreign policy, and national security organs have confirmed so. It is not good to take security matters out of those who have been trained and hand it over to local judges, juries, and tort lawyers.

The other reason as to why the president did not support the bill is that it could upend sovereign immunity that had been long standing. He foresaw a situation whereby other foreign governments would also pass similar bills to hold the USA accountable for its military actions where it has been called for assistance or abuses that the police had on foreign citizens while training their forces. This would put USA businesses and foreign holdings at risk. JASTA would also complicate the relationship that the USA has had with its closest friends. This endangers its ability to get support whenever it is in need of support on national security matters. When voting on the bill began, twenty-eight senators acknowledged the fact that the bill had got loopholes. They vowed that once they were elected again, they would fix it accordingly. They understood their wrongness but did not want to reverse their decisions to vote in support of the bill. JASTA shook the relationship that the USA had with the Arab trust in the USA thereby putting at national risk security and business partnership. This was the case with Dubai port, and it would repeat itself once again. The argument by members of the Congress that JASTA was meant to grant justice to the 9/11 attack. They were more concerned about electoral considerations, anti-Arab sentiment, crass opportunism and exploiting the families of the victims. The Congress did not have reliable and factual evidence to link Saudi Arabia to the attack. The Commission Report by the USA after the attack was very clear that there was no relationship between the senior Saudi officials and the attack or even the Saudi government itself. Implementing the bill would just spoil the relationship that the two countries have had over time. The members of the Congress knew about the report very well, but it is not understood why it was not possible for them to be honest with relatives and families of those who had died or seriously injured in the attacks. They were also misled by their lawyers to enact the bill without minding about its negative consequences. It seemed that the members of the Congress did not have political courage that was needed in making important decisions. They gave a lot of weight to their re-election as opposed to the possibility of family lawyers losing the cases in court because of the inability to prove the involvement of foreigners or foreign government. The decisions made by the courts will have to be appealed and in some cases overturned. In the long run, the victims will not receive the justice that the Congress claimed that the bill would give them. The families of the victims will have also paid millions to meet the cost of legal fees. Besides, the Saudi government will also pay the money for the legal fees. If the court fails to prove the involvement of the Saudi government in the attacks, the families of the victims will have to dig deep into their pockets to meet the cost of the case. This will deal the families a big blow apart from failing to get compensated for the losses of lives and properties destroyed during the attacks.

JASTA that was vetoed by President Barrack Obama but failed to get the backing of the Congress had negative consequences as it would damage the relationship that the USA has had with Arabian countries. The beneficiaries, in this case, would be the lawyers hired by the families of the victims or the Saudi Arabian government. The victims who are supposed to be protected by the case will be outsiders in the case as it would even worsen their situation because of the legal fees involved. There is also no way to which the Congress members would be blamed for passing the bill. The heartbreaking mess in the name of JASTA affects the USA regarding its relationship with Arab as well as the family members of the victims. If the Congress believed that JASTA would help the victims of the attacks it was supposed to come up with ways to which there would be evidence otherwise the bill would just be without any help. This is because of the difficulty in getting the desired results which are disheartening and frustrating. As a matter of fact, JASTA is good if it would have done justice to the victims of terrorist attacks and ensured that the USA would still enjoy the relationship it has had with other countries, especially Saudi Arabia. Having presented the many reasons against JASTA, it is only realistic to hold that the bill was meant to display the war between the executive branch and the legislature regarding which arm was more powerful than the other. The executive branch represented by the president was right on the matter, but because the Congress wanted to clip the veto power of the president in the guise of protecting the interests of Americans, it passed the unfavorable bill.