Preparation of Alkene from 4-methylcyclohexanol

Preparation of Alkene from 4-methylcyclohexanol

In this experiment molecules of alcohol were reacted in the presence of strong acids, like H2SO4 or H3PO4 , they lost the water molecule, and converted into alkenes. Later in this experiment, several tests ware done to recognize whether molecules of alcohols were converted into alkenes or not. For that, we have to react the product with colored bromine and colored KMnO4 which both resulted into a colorless substances.

Alcohols can be dehydrated into alkenes by using acid such as H2SO4 or H3PO4.  Water will be eliminated from the molecule of alcohols and a C=C double bond will be formed.  If the molecules of alcohol were not symmetric, then it may produce the mixture of isomers of the alkene.

When we use a strong acid like sulfuric acid, it serves to protonate the “OH” group of alcohols, which form a water molecule and that is much better leaving group. As water leaves from 4-methylcyclohexene, a proton is also lost in this elimination process [1]. Which resulted into the alkene product. But in this method we did not get much product, unless we change the equilibrium of the reaction by eliminating the product to decrease its concentration and increasing the concentration of reactants.

Then a wash with NaCl solution will help to remove acid and most residual water from distilled product. The 4-methylcyclohexene required removal from the system as it was being formed to prevent the reverse reaction. To do this, distillation technique was used. While distilling the solution, some water was taken off with the product due to the closeness of their boiling points. However, 4-methylcyclohexene is insoluble in water, so the two liquids were easily separated [2]. Alkenes can be easily characterized by the several tests, like a red colored bromine solution will turn into a colorless when it react with an alkene compound [3].

According to balanced chemical equation,

1.5.3 IR spectrum of product and reactant:

The IR spectrum of both reactant and product (figure 1) indicates bonds strengths and also it differentiate different compounds.  The IR spectrum of product indicate that one bond is greater than 3000 cm-1 which is =C-H, while the other bonds and stretches are lower than 3000 cm-1. =C-H bending have absorption less than 1000 cm-1 and C=C stretch also ranges from 1680 to 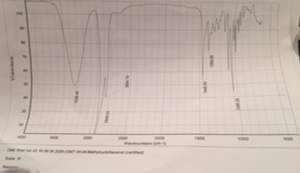 While in reactant case (figure 2) most of stretches and bonds have more absorption than 3000 cm-1. If we analyzes both graph the broad mountain like curve indicate the OH group in reactant but in the product there is no such curve, all the curves are small and thin so there is no OH group presents in the product. 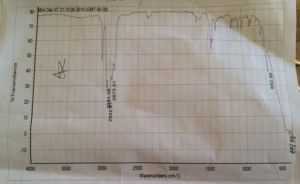 The percentage recovery is about 40%, it is very low, and may be its due to incomplete reaction or distillation. While in extraction and washing phenomenon some product also lost, which resulted in low recovery. Long reaction time with proper handling may increase the recovery percentage.

When KMnO4 and Br2 were discolored by the product it indicated that the product contain C=C bonds, these colored reagents react with double bonds carbon and become transparent in color. This test confirmed that alkene produced during the dehydration of alcohols.

Saturation tests confirmed that dehydration of alcohols (4-methylcyclhexanol) in H3PO4 and H2SO4 will give alkenes (methyl cyclohexene). Water is removed during the reaction which resulted into double bonds between carbon atoms. In this reaction yield of alkene is very low, and it can be increased by increasing the time of reaction and by decreasing losses during washing and extraction.