Oolite is a sedimentary rock made up of ooids (ooliths) that are cemented together. Most oolites are limestones — ooids are made of calcium carbonate (minerals aragonite or calcite).

Ooids are spheroidal grains with a nucleus and mineral cortex accreted around it which increases in sphericity with distance from the nucleus. Nucleus is usually either mineral grain or biogenic fragment. The term “ooid” is applied to grains less than 2 mm in diameter. Larger grains with similar genesis are pisoids (pisoliths). Rocks made up of pisoids is pisolite.

Ooids usually possess a clearly developed growth banding. Ooids may be spherical but some are elongated, depending on the shape of nucleus. Most ooids are marine, forming in shallow (less than 10 m, preferably even less than 2 meters), warm, and wave-agitated water such as the Persian Gulf and the Bahama Platform. 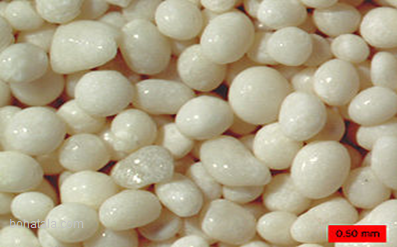 Ooids in these places form a distinct type of sand — ooid sand. Ooids are kept moving by waves which enables accretion to occur on all sides. This is also the reason why ooids are so well-polished. Warm water is needed to lower the carbon dioxide content in water (higher temperature reduces the ability of water to keep gases dissolved) and thereby enhance the precipitation of calcium carbonate. It is believed that ooid formation is generally abiogenic process. However, the exact formation mechanisms are still unresolved.

Most modern ooids are composed of mineral aragonite. Some ooids form in non-marine environments, the Great salt Lake is probably the best known example of ooid formation in saline lake. Some ooids form in fresh-water lakes, caves, caliche soils, hot springs, and rivers. Even ooids made of evaporite minerals gypsum and halite have been reported. Sometimes ooids form even in human-constructed features such as drainage pipes and Water treatment plant. 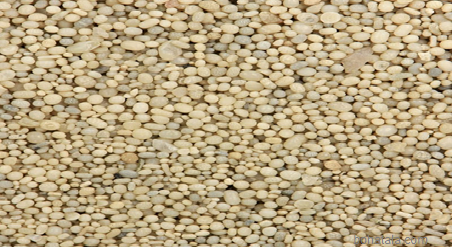 Some ooids are made of silica (chert), dolomite or fine-grained phosphatic material (collophane). Such ooids are formed by replacement of original calcium carbonate but they may be also primary. Especially phosphatic and iron-bearing ooids composed of hematite and goethite seem to have been formed as such.

Iron-bearing goethitic (limonitic) ooids are probably formed out of volcanic pyroclastic (volcanic ash) material deposited in sea. Concentric layering in iron-bearing ooids is thought to result from constant agitation of ooids associated with currents and expulsion of gas from the sediment. Such ooids may form oolites which contain nothing but brown iron-rich ooids but more commonly they occur within other sedimentary rocks. 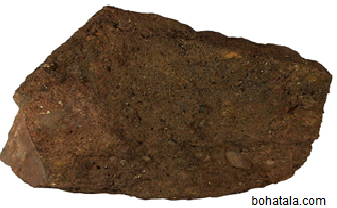 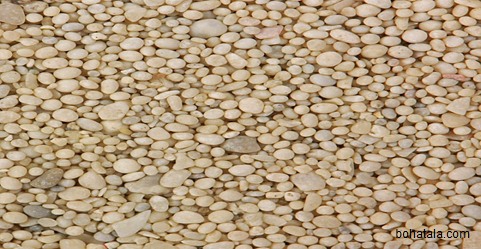 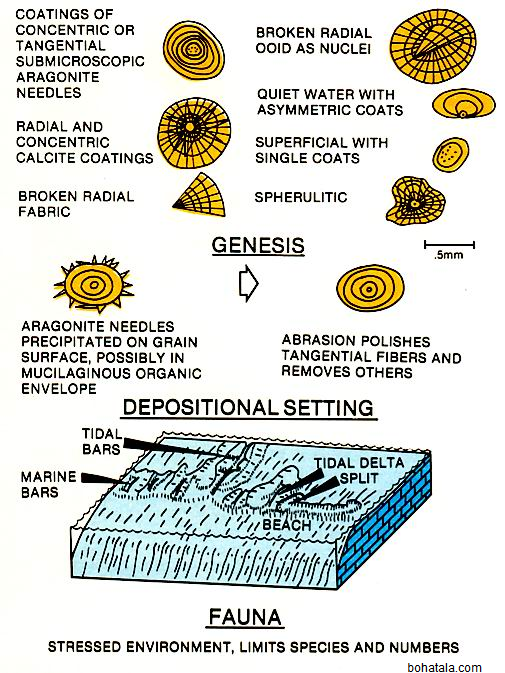 A pisolite is a sedimentary rock made of pisoids, which are concretionary grains – often of calcium carbonate, but sometimes of rarer minerals – which resemble ooids but are always more than 2 mm in diameter. These grains are approximately spherical and have concentric layers reaching 10 mm in diameter. The name derives from the Hellenic word for pea. Bauxites, limonites and siderites often have a pisolitic structure. 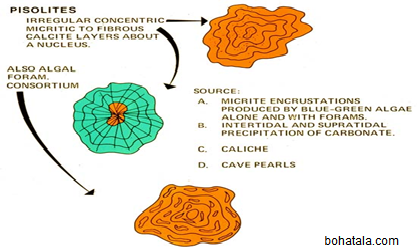 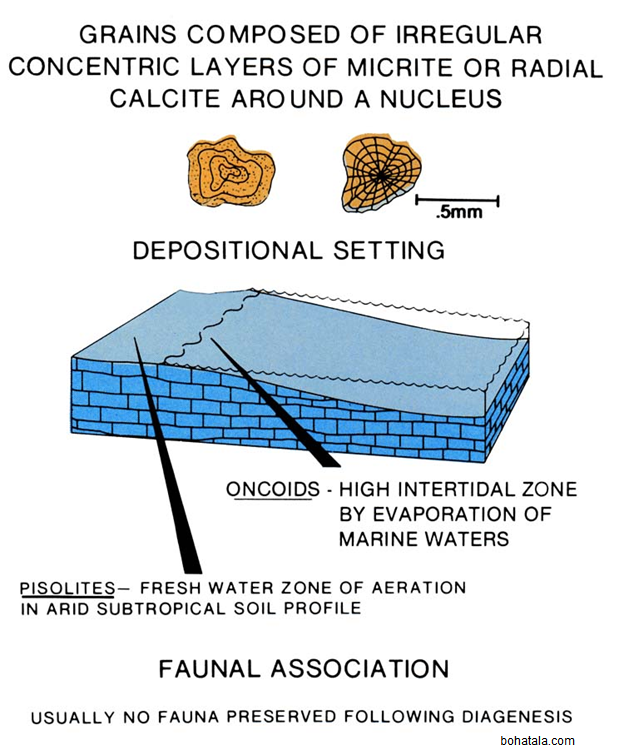 Laterite is a reddish weathering product of basalt. At least this is what it is in India where this rock or a soil type was first defined by a Scottish scientist Francis Buchanan-Hamilton in 1807.However, not all laterites are enriched in iron and sometimes they are not even reddish. Some lateritic rocks (bauxite) are mined because of their high content. Iron-rich laterite is mostly used as a construction stone, especially in Asia.

Laterite is a residual material. It is mostly composed of iron, aluminum, titanium, and manganese oxides because these are the least soluble components of the rocks undergoing a type of chemical weathering known as laterization or lateritization. Iron-rich laterite consists of hematite and goethite. These minerals give reddish color to the soil/rock and sometimes such deposits are mined for their iron and nickel content (in Cuba and  New Caledonia).

Aluminous laterite (bauxite) is mostly composed of aluminum hydroxides gibbsite, diaspore, and boehmite. Not all bauxites are laterites, though. Some bauxite deposits are associated with limestones and karst phenomena. Lateritic bauxite is a weathering product of aluminous silicate rocks (granite and similar).

Laterite is foremostly a type of earthy soil but it hardens into solid rock in air and is therefore suitable as a construction material. Lateritic soil almost lacks fertility and is generally not suitable for agriculture.

Certain conditions are needed for the laterite deposits to form. Modern examples are found in climatic regions which are characterized by warm air temperature, abundant rainfall, and dry periods. Lateritic soils are common in savannas but not in rainforests and jungles (where clay is dominant in soil) which lack dry period. Modern laterite deposits are also unknown in temperate regions where weathering largely means the formation of clay minerals instead of lateritic soils. 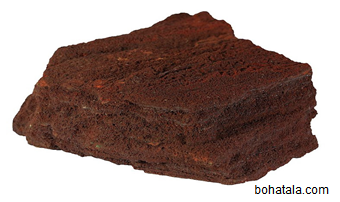 A sample from India. Laterite is very common in India due to climatic reasons

An outcrop of laterite in Northern Ireland near the Giant’s Causeway. 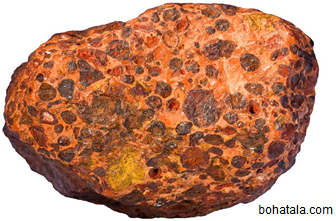 Bauxite is an aluminum-rich laterite

Laterite is not uniquely identified with any particular parent rock, geologic age, single method of formation, climate per se, or geographic location. It is a rock product that is a response to a set of physiochemical conditions, which include an iron-containing parent rock, a well-drained terrain, abundant moisture for hydrolysis during weathering, relatively high oxidation potential, and persistence of these conditions over thousands of years.

Tropical weathering (laterization) is a prolonged process of chemical weathering which produces a wide variety in the thickness, grade, chemistry and ore mineralogy of the resulting soils. The initial products of weathering are essentially kaolinized rocks called saprolites. A period of active laterization extended from about the mid-Tertiary to the mid-Quaternary periods (35 to 1.5 million years ago).

Laterites are formed from the leaching of parent sedimentary rocks (sandstones, clays, limestones); metamorphic rocks (schists, gneisses,migmatites); igneous rocks (granites, basalts, gabbros, peridotites) which leaves the more insoluble ions, predominantly iron and aluminium. The mechanism of leaching involves acid dissolving the host mineral lattice, followed by hydrolysis and precipitation of insoluble oxides and sulfates of iron, aluminium and silica under the high temperature conditions of a humid sub-tropical monsoon climate. An essential feature for the formation of laterite is the repetition of wet and dry seasons. Rocks are leached by percolating rain water during the wet season; the resulting solution containing the leached ions is brought to the surface by capillary action during the dry season. These ions form soluble salt compounds which dry on the surface; these salts are washed away during the next wet season. Laterite formation is favoured in low topographical reliefs of gentle crests and plateaus which prevents erosion of the surface cover.