Determine the Amount of Phosphate in the Laundry Effluent

Introduction:  Phosphate salts are retrieved from naturally occurring minerals, which are mined, refined, and 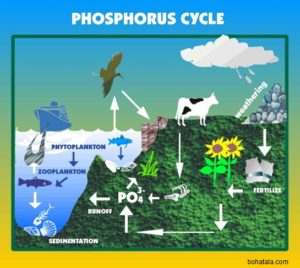 purified for use in many applications. Mostly Phosphate is used in agriculture as a fertilizer.

Natural: Weathering of Phosphate-containing rocks is the cause of phosphate entrance in nearby rivers and streams (EEA, 2005).

Anthropogenic: For Phosphate, households and industry are the most significant source. Sometimes agriculture has become the main source of phosphates because of the use of fertilizers and pesticides (EEA, 2005).

Take 40ml of sample, add 8ml of ammonium molybdate in it and keep it for 10minutes. Add 8ml of ammonium molybdate in each standard solution and keep them for 100minutes. Standard solutions will turn into light blue to dark blue depending upon the concentration of phosphate in them. Now run these standards on spectrophotometer at the wavelength of 690nm. Note down the absorbance and draw a graph of these absorbencies. Now run the sample and note down its absorbance and by plotting it in graph find out the concentration of phosphate in the sample.

Result: The concentration of phosphate in the sample is 55ppm

An excessive amount of phosphate in the water will wildly increase the growth of algae and aquatic plants which in turn choke the waterways and utilize large amounts of oxygen, this condition is called eutrophication. This rapid growth of aquatic vegetation eventually stops as a result aquatic plants and animals start dying and remaining oxygen uses up in the process of decaying. This will disturb the whole aquatic ecosystem (ECC, 2004).

When there is shortage of phosphate in soil then the plants suffer from chlorosis, necrosis and marginal scorching of old leaves, which may led to shedding of old leaves (MASOOD, 2011).

Determine the Amount of Sodium in Water and Soil

Determination of the Amount of Chloride(Cl) in the...