Graphene is a kind of metal that has a feature of overlapping between the conduction bands and the valence it has. These are arranged in a basic structure of lattice hexagonal that has a single layer of carbon atoms. The different other allotropes of carbon accept it as the basic structure for their formation such as graphite, diamond, charcoal, carbon nanotubes and fullerenes. It is the largest molecule for an aromatic molecule, which is, belongs to the polycyclic aromatic hydrocarbons family. There are many of the properties of the Graphene as in between the ever-tested material it is the strongest that with great efficiency can conduct heat and electricity as it has a nature of being transparent.

It has a structure of levitated by neodymium magnets, which is more than the amount of graphite that has a nonlinear diamagnetism. For many years, scientists have been discovering many of the theories about graphene. For about centuries it is been produced in a very small quantity and used by many of the similar graphite applications like pencils. In 1962, it was first analyzed in electron microscopes but it was studied as a supporting material to metal surfaces. The material used was after some time this material was again designed and studied by Andre Gelm and Konstantin Novoselov In 2004 at University of Manchester. (Anon., 2014)

The making of it has concluded many of the theories that describe its existence. Related to making of the two-dimensional material of graphene it was honoured by two Nobel prizes in 2010. It is formed by combining graphite and the suffix -ENE named material that was a single-layered carbon foil. The term Graphene was introduced in 1968 as a single sheet of graphite. It is a six-member carbon ring, which is also known as “infinite alternant” in polycyclic aromatic hydrocarbon. In the previous times, it was stated that these are graphite layers, carbon layers, or may be carbon sheets that may be considered the term, which uses graphite it is not correct to be used as a single layer as it implies three-dimensional structure. (SánchezA. Ureña, 2014)

When we are going to discuss the reactions, structural relations or other properties of individual layers. According to Geim, he said that Graphene is the single atomic plane of graphite that is necessarily extracted from its environment and stands free in that atmosphere as per the need. 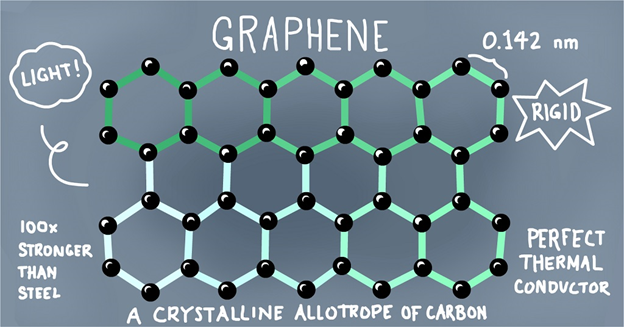 A carbon crystalline allotrope has two-dimensional properties. The carbon atoms of these are packed in a regular hexagonal pattern wire made of atomic scale. Each atom in it has four bonds one is o bond and the other is π bond that has become out of a plane in oriented form. The atoms are in A part from. The lattice in Hexagonal are termed as two interleaving triangular lattices these are used to make the structure of bands calculative for a single graphite layer using a tight binding approximation as well as created a band structure for single graphite using an approximation of tight binding. These can be considered as two interleaving triangular lattices. This myth was its stability is because of its tightly packed atoms of carbon that shows an orbital hybridization, which is a combination of different orbital’s likes, px and py that constitute the O band. (Rfwireless-world.com, 2012)

The bonds together become hybridized that form the π- bands and π∗-bands. The main task of these bands is to handle electronic properties of the notable graphene’s where the free moving electrons made the half bands movement. There are usually many of the evidence has been observed in the Graphene’s sheet. Some single walled nanostructures show the unlayered Graphene rings that have been revealed at the core of presolar graphite onions. The studies show that in flat graphite sheets the defects are being fascinating by these after suggesting a role for the two-dimensional crystallization from a melt.

There is a quality of Graphene that it can easily repair its holes when they are going to be exposed in the front of molecules that contains carbon for example hydrocarbons. That is made with pure carbon atoms, Suspended graphene sheets between bars of a grid made of Mattel was studied by TEEM sheets. These are the metals that are being used by the scientists or by the scientific researchers in terms of making too many further metals through it as well as their structures are very much uniquely designed by the overall structure formatting of the new designs in metals as a must. (Quora.com, 2018)

The Flat sheets are rippled in the graphene, which has a diameter of about one nanometer. As two-dimensional crystals are not able to get stable all the time then these ripples are in strict to the material as a result of the isolated real state images by the space satellites. It also makes the formation of these satellites very much sensitively and very much easier as well. In all TEEM images of the graphenes. The atomic resolution of the images of the space is of single layers that are needed to be removed from there in terms of observing TEEM images by observing their rippling that is caused by the graphenes conformation in this regard.

The calculations shows that the size of a graphene is less than about 20 nm that is thermodynamically unstable and it can be made very much stable that depends on the size of it as it is placed only for the more than 24000 atoms large molecules that are needed to make it in a better and efficient way and to utilize it in the most efficient form. The two-dimensional system that is necessary to be shown in the form of similar properties as well as it is related to the working of graphene. These are run under a proper system and that makes the observation of physics very much easy and efficient and to implement it in designing and formatting the actual aspects in this regard. (Azonano.com, 2013) 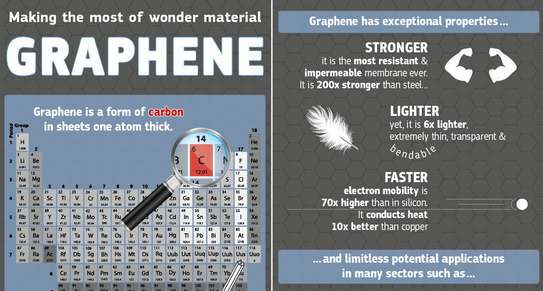 In such type of systems, the only particles that only be chosen are not always electron, whether they can be optical photons, microwave photons, plasmons, micro activity polaritons or too many other electrons as well. They make a structure like a honeycomb that is able to absorb or release a different nature approach to carbon in order to release them. It can be a photonic crystal that is an array of some of the metallic rods; the nanoparticles made of metal, A lattice of coupled Micro activities are an optical lattice. The following structure building of the Graphenes had made it more different and unique among the masses. (Radianceiitb.org, 2017)

There are many methods used to produce the graphene. Through chemical synthesis, the isolated 2D crystal cannot be produced. Maximum electron mobility and fewer defects of graphene are generating by exfoliation, in 2014. With organic as well as inorganic substances are optical method is utilizing to generate instantaneous label-free exchanges of graphene. The chemical potential of graphene is controlled efficiently. When input optical strength is greater than the entrance value, the graphene combination becomes saturated. Beneath strong excitation, graphene can be saturated eagerly.

Ultrafast photonic is the broad property of graphene, this happens because of fiber laser quality of graphene. Graphene oxide layer is tuned electrically this is the result of the optical reaction of it. Due to its wideband optical absorption quality, in graphene, the storable absorption property is used in a microwave. Because of nonlinear Kar effect, graphene has a nonlinear phase shift. In Kar effect graphene is supposed to be a powerful medium, as well as have the ability to observe the non-linear effects, the solution is the most important.

The nonlinear refractive index of graphene is negative, in 2016. Thermal nonlinearity of graphene is determined by thermal lens spectroscopy. Nanostructure graphene can also produce by many methods. Throughout a plating process to generate Ni-graphene merged on an intention substrate, graphene nanosheets can be included in a nickel medium. Graphene is a brittle, in spite of its potency. By using sugar, graphite can be prepared. This is quite safe and atmosphere pleasant method than exfoliation. (ZHANG, 2016)

This technique is used to manage the thickness. We can generate graphene by heating the silicon carbide under low pressure as well as high temperature. In applications, the graphene layer requires being prohibited by the thickness and packing density. With the challenge of production cost, graphene seems to cleave to huge potential.

Here, are some disadvantages of graphene, which described below: