This report is based on gender discrimination in the workplace. Gender Discrimination in the workplace may occur in different ways. Although every country admits that gender inequity must be removed, it still is a big issue, especially for women. In most of the gender discrimination cases, the attitude of higher authorities was biased against victims (male, female, transgender). This attitude makes a hostile working environment for victims resulting in stress and lack of motivation in victims. We mentioned some of the famous incidents of gender discrimination of big organizations against their employees and fight back of those employees. We discussed current laws and possible future strategies to prevent such cases. 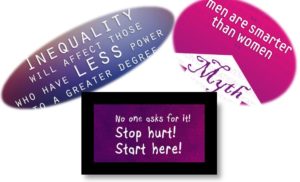 See also: Sex Discrimination at Workplace in the USA

Gender discrimination cases have been observed in private sector, businesses, NGOs as well as in government offices and educational institutions. Different salaries, facilities, working conditions, promotion opportunities and hiring criteria based on the gender of the employee are different scenarios of gender discrimination.

In 2006, a study conducted in Sweden revealed problems faced by women in public and private sector. The study showed that women having small kids suffer more problems in their careers. Young and elderly women also face a lot of problems in their jobs regardless of their skills and abilities. Women have had trouble in getting promotions and benefits. However, this study didn’t show any evidence regarding fewer job opportunities for women as compared to men. This study was also focused on effects of sticky floors and glass ceilings on women. (Bihagen & Ohils, 2006)

In 1999, there were almost 24000 complaints were registered with Equal Employment Opportunity Commission USA (U.S. Equal Employment Opportunity Commission, Sex-Based Charges FY 1992-FY 1999). There have been huge numbers of cases filed in US courts regarding gender discrimination. Most of the victims were women working as, receptionist, prison guard, factory workers, college professors and cashiers. These women faced gender discrimination in their respective fields by their superiors or co-workers. We have listed few of the famous cases of gender discrimination in the workplace in American society.

In 2004, a report released by United Nations revealed that peacekeepers in Liberia exploited and abused young women. Culprits used food and money to abuse these young women. UN decided to send female peacekeepers to stop such issues.

A report made by Uzma Shoukat gives us a better perspective of literacy and women’s identity. She wrote in her report that identity of an individual is formed by factors like parents, society and environment. She found out that attitude of parents towards their kids play a major role in forming personality. She wrote that parents (mostly in South Asia) consider their daughters weak and vulnerable. This mentality is the initial step of discrimination. (Shoukat, 2004)

These are few examples of gender discrimination in the workplace.

If there are not equal promotion opportunities for male and female in an organization then there is gender discrimination present in that organization.

In most cases of gender discrimination, women are paid less than men working on the same position. Stats show that in America women only earn 77 cents as compared to one dollar earned by men.

In past, we’ve seen many examples that companies used to prefer men while hiring. There are several reasons for such incidents.

The following figure shows statistics of an interview. American men and women were asked if they faced discrimination in getting a promotion or new opportunities. This research revealed that 15% of women think they were discriminated because of their gender. However, only 8% of men said that.

Many organizations are biased in providing opportunities. This biasness is mostly towards female employees. Even in the developed country like America, women claimed that they were denied of new opportunities because of their gender.

A case of denying career opportunities based on gender appeared in Good Year Tire Company. 800 female employees of this company claimed that they were denied of new opportunities because of their gender. The company agreed to pay $925000 for settlement.

Similar incidence happened in Svenska Handlesbanken, an international banking firm. Victoria Greenbaum was denied of vice presidency positions despite the recommendations of her seniors. Every time different explanation was given by the company for not appointing her to this post.

As we discussed earlier there are several factors which create a discriminatory environment mostly for women. Job capabilities, bargaining skills, nature of job and work-load are few issues. These are challenges which mostly women face while entering the job market and on the other hand men face several other challenges. Moreover, there is not much institutional support to decrease gender discrimination.

This law prohibits discrimination based on gender, race, color and religion.

This law was made to make sure that all employees of a company get paid equally.

This law was made to protect female workers. It prohibits companies to discriminate against pregnant employees.

Every country has laws which prohibit discrimination at workplace against any gender. We only mentioned laws of USA.

Regardless of these laws, there are still a lot of complaints about gender discrimination at workplace. These are few recommendations to prevent such cases.

Gender discrimination is a mentality. People accept discrimination at workplaces. To eradicate this psychology we need to empower our women. A better education opportunity is first step to for empowering women. We need to come up with more strategies, short term and long term goals for gender equity.