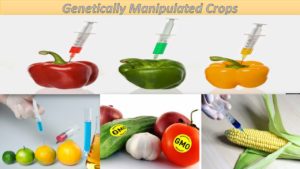 GMOs are organisms which are genetically modified in laboratory using genetic engineering. GM crops are crops which genetically manipulated using recombinant DNA technology. The reason behind doing genetic manipulation or modification is to introduce a new trait in crop which does not exist naturally. Crops are genetically modified to produce resistance against certain diseases, environmental conditions such as droughts, and biotic stresses. Genetic engineering is also used to increase the nutrition profile of the crop. (Key, Ma, & Drake, 2008)

Crops with desirable characteristics have been produced since many years using conventional breeding methods. Crops with favorable characteristic are selected and propagated by repeated sexual crossings. This was a lengthy process, took almost 15 years to produce new varieties. Genetic engineering can speed up this process dramatically. Farmers are now widely adopting GM technologies. Last year in United States, 93% planted area of corn, 96% of cotton and 94% of soybeans were genetically modified varieties. Following image shows the global area of legally planted Genetically Modified crops in 2002. (FBA) 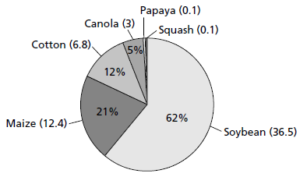 Most importantly there are different health concerns related with these techniques. However, Genetically Modified crops are tightly regulated by several government bodies such as European food safety authority, food and drug agency (USA), the Environmental protection agency and the US department of agriculture.

Use of GM Crops in Africa

Agriculture is considered as economic back bone in almost whole African region. According to USAID, the agriculture economy employees almost sixty percent of the population and contributes almost 30% of GDP. In sub-Saharan Africa, the agriculture development is facing challenges of climate change and climate variability. Pests are a consistent threat to the crops grown for the human consumption in this region. Crops cultivated using organic methods are at a risk due to the crop pests.

There has been a decline in per capita food production in sub-Saharan Africa and soil nutrition depletion is considered as biophysical root cause of this problem. According to Drechel at el data collected from thirty-seven countries of this region indicated that there is a significant relationship between reduced fallow periods, population pressure, and soil nutrition depletion. Increasing human population in this region is also putting immense pressure on the crops and yields per Hectare. (Arthur & S.Yobo)
As we know that sub-Sahran African region is known for having highest proportions of malnourished populations in the world, with one in every three individuals to be chronically hungry. GM crops supporters believe that through proper cultivation of GM crops, crops losses can be reduced and food production can be increased. Kenya, Ghana, Uganda, and Nigeria are working on developing GM crops which are pest resistant, drought resistant, nutrition rich, and give more yield than conventional crops.

There have been a lot of debates on the use of Genetically Modified crops in Africa to tackle food security problems and poverty reduction. Although decision makers from developing countries consider GM crops as solution for food crisis, the unending debate over benefits and concerns of these crops is hindering its implementation. Currently, there are 29 countries cultivating GM crops and out of these 29, only 3 are from Africa. Only South Africa and Burkina Faso has approved commercial cultivation of these crops. (Arthur & S.Yobo)

The cultivation of GM crops in Africa has raised a lot of new legal, ethical, and economic questions and concerns. In Africa, GM crops are promoted as a solution for low agriculture productivity. However, there are concerns regarding effects of GM crops on human health because of its potential toxicity and allergenicity.

Other factors such as food safety, public attitude, and socio economic factors are also reasons for debate. Many people believe that GM crops may have bad effects on human health. But as mentioned earlier, GM crops are strictly regulated by government bodies. Many people have concern that genetic modification isn’t natural. Environmental risks of cultivating GM crops are also a concern. However, there has been no visible indication of GM crops affecting the biodiversity. There are also numbers of ways to prevent and control gene flow. There are also concerns that GM crops will only benefit large scale farmers and how these crops will be introduced is such a way that local practices are not disrespected. (The use of genetically modified crops in developing countries; a guide to discussion paper)

In 2002, Zambia, Zimbabwe, Mozambique, and Malawi faced huge food shortage crisis. US food aid came to rescue but these countries refused to take the donations because it consisted of GM maize. Zimbabwe and Mozambique eventually accepted the donations.

One can understand why farmers from sub-Saharan region are not allowing cultivation of GM crops on their lands because it will disqualify them for certain European markets or restrict them to providing only animal feed. (Arthur & S.Yobo)

Although, most of the times potential environmental risks are overly exaggerated, but they do have potential to cause health and environmental issues. GM crops have spurred an increase in herbicide use and an epidemic of herbicide-resistant “super-weeds”. (Arthur & S.Yobo)

Catholic Social teaching is based upon a set of principles on which we must form our conscience to evaluate the frame work of society. It is central and essential part of our faith. It addresses questions such as: what type of government and economic system is best for promoting human freedom; what are pathologies harming our culture and how we can stop it; why faith must be the part of the public square; how we must address the issues and problems of a developing state ; among many other issues faced by modern society.

There are different principles of catholic social teaching which must be kept in mind before analyzing our issue. These principles or themes are:

Social Teachings and Ethics of GMOs

It is important to relate ethical reflections of catholic social teachings about GMOs in large theological framework. For this purpose, we must consider the catholic opinion on creation. Pope John Paul II said:

It is crucial that we recognize that human well being must be attained in harmony with our whole, single earth community. Since we are an integral part of this created order, we must take into account the nature of each being and of its mutual connection in an ordered system which is precisely the ‘cosmos’. (Lesseps & Henriot, 2003)

A basic theological principle guides us in our understanding about GMOs; it suggests that all of God’s creations have an intrinsic value. Realization of intrinsic value leads us to the respect for the nature. However, it is not easy to guess the biological disturbances resulted from indiscriminate genetic manipulation of the plants. So, we must avoid adopting such technologies unless it is adequately tested. We can conclude that Holy Father suggested that we must not adopt these technologies if we are not sure about the consequences. So, this precautionary approach is strengthened by these two key emphases found in church’s social teaching. (Whittmore)

Social Teachings and Use of GMO Crops in Africa

We can use four principles of social teachings to evaluate the Genetically Modified crops in agriculture. We can find relevance to the Zambian food crisis of 2002.

Option for the poor:

CST clearly emphasis that while making political and economical decisions, this must be kept in mind that how these decisions will impact the poor. And that impact must be measured in short term and long term ways. (Lesseps & Henriot, 2003)

Now there are two issues occur when Genetically Modified crops are launched in Africa. First, the current mechanism of distribution of Genetically Modified crops is designed in such a way that it only benefits the large scale farmers. So, small farmers are now completely dependent on large corporations for seeds and other necessities. There is less chance for those who still want to continue with organic farming. The old tradition of saving seeds for next year is abandoned. In Zambia, the existence of small scale farmers is in danger because of this.

Secondly, the basic idea behind introducing GM crops to tackle food shortage is challenged by counter argument. We can see in the case of Zambia and other poor African countries that food shortage is linked with economic structure of distribution and accessibility. In other words, hunger is directly linked with poverty. We can conclude from available facts that there is no food shortage in world and no shortage of potential food production. The Justice and Peace Environment Desk of the Southern African Catholic Bishops Conference mentioned that there are almost more than two thousand native plants, grains, roots and fruits are found. These plants have been feeding the population for thousands of years but most of them are getting no scientific attention whatsoever. (Arthur & S.Yobo)

The CST principle suggests that decisions which can be made on small levels must not be taken to the higher levels.  The presumption is that decision makers at small levels will have both wisdom and concern to make most appropriate and best decision. Even in this globalized world, this principle still has ethical and political value. (Economic Justice for all: Pastoral Letter on Catholic Social Teaching and the U.S. Economy, 1986)

In 2002, Zambia, Zimbabwe, Ghana, Nigeria and few other countries faced food shortage because of the weather conditions. The president of Zambia had to face a lot of international pressure to introduce the GM crops even before any necessary bio-safety policy. Genetically Modified crops were introduced after a comprehensive study was conducted; president was ridiculed for accepting the results of the study.

Solidarity is a kind of interconnectedness both ethical and empirical, both institutional and personal activities that make up the social fabric of our existence. In the social teaching of church, solidarity get promoted in conscience acts that make a community. In human beings, solidarity is not just compassion but making of society of mutual sharing. When economic activities affect community; creating gaps between rich and poor then solidarity of that community is damaged.

The case of Zambia’s resistance to GM crops is an example of neo-liberal and geo political forces of globalization that would negate the Zambian concerns. This is why Pope has spoken so eloquently for “Globalization with solidarity, a globalization of solidarity”. (Lesseps & Henriot, 2003)

GM crops are those crops which are genetically modified. These crops are produced to fight against tough weather conditions, resistance against diseases and pests, and to increase nutrition profile of crops. Farmers in whole world are widely accepting these crops. There are lot of concerns regarding use of these crops such as effect on health and environment.

Pope John Paul II and other catholic opinion makers were against the use of Genetically Modified crops in Africa. We’ve discussed in detail about the ethical issues in the light of church’s social teaching.

Benefits and Harmful Effects of Genetics on the Modern World