Home > Subjects > Medical > The Use of CRISPR For Human Genome Editing

The Use of CRISPR For Human Genome Editing

The use of CRISPR for human genome editing has become a hot topic of discussion. Genome editing, as obvious from name, is process of inserting, removing, or replacing a DNA from a genome using artificially engineered nucleases. CRISPR is an engineered nucleases used for this process. The CRISPR is short for clustered regularly interspaced short palindromic repeat. It provides an effective system to manipulate and alternate the genome of any living organism. In short, CRISPR is a genome editing technique that can used to change and modify the genome with maximum accuracy (CRISPR Handbook: Enabling Genome Editing and Transforming Life Science Research, 2015). CRISPR was invented in 2012 by the scientists of University of California (Yin, 2015). Unlike old technologies, CRISPR technique is more efficient and economical. This technique has received huge appreciation and criticism.

In 1970, restriction enzymes were discovered which paved way for biologists to start experiments on manipulating mammalian genomes. CRISPR is a powerful technique for genome editing which has recently emerged (Ramalingam, Annaluru, & Chandrasegaran, 2013). Because of its simplicity, it is most likely that this system will be most popular for genome editing in mammalians. The figure below explains the mechanism of CRISP mediated immunity in bacteria (CRISPR Handbook: Enabling Genome Editing and Transforming Life Science Research, 2015). 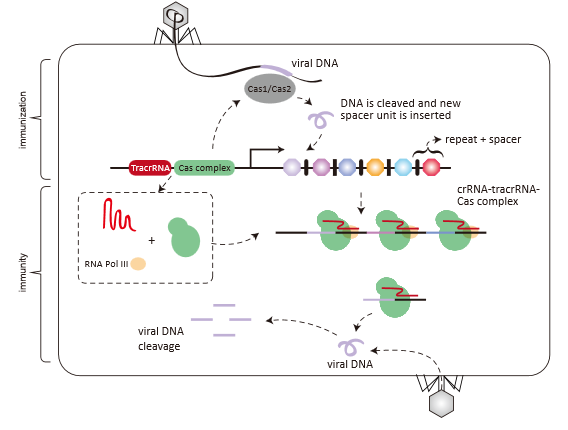 There are two main phases in CRISPR based immunity as presented in above figure: immunization and immunity. In first phase, which is immunization, a complex is formed by Cas proteins. That complex cleaves the foreign DNA. This DNA is then assimilated into bacterial CRISPR loci as repeat-spacers units as shown in above figure. In second phase, pre-CRISPR RNA unit is formed by repeat-spacers. Cas9 is used to Trans-activate crRNA and then it binds to pre-crRNA. Following cleavage by RNA polymerase, a complete crRNA-Cas9-TracrRNA complex is created. This crRNA-Cas9-TracrRNA complex is necessary to select and abolish foreign DNA. (CRISPR Handbook: Enabling Genome Editing and Transforming Life Science Research, 2015)

The simplicity of CRISPR is its major advantage. There are only three required components: Cas9, crRNA, trRNA. So, it reduces a lot of complexity. After its initial demonstrations, this system has been widely adopted in all around the world. Target efficiency is a parameter to assess and check a genome editing tool. In the case of CRISPR, target efficiency has been much better as compared to other methods.

Accuracy is other advantage of CRISPR genome editing. If CRIPSR technique is used then protein engineering is not required for every targeted genes which is not the case in TALE and ZF nucleases. A few simple DNA constructs are required to encode Cas9 and gRNA. Moreover, several genes can be edited at same time. Another advantage of CRISPR is that sgRNA can tolerate up-to five mismatches with undesirable target sites. Moreover, it has been reported that rate of indel formation are around 70% (Davis, 2014).

The ease of design and construction is also an advantage of CRISPR. For example, for every target site, we only need 20 nucleotide genomic target site programmed into overall sgRNA. Plasmid construction is very less complex and straightforward. So, overall process is not that difficult for biologists. (Davis, 2014)

For the first time, researches at Sun Yat-sen University in Guangzhou, China, edited the genomes of human embryo, which started a debate regarding ethics and risks of human editing (Lewis, 2015). This experiment was only partially successful. However, it raised serious questions regarding the process and its possible outcomes.

The research in CRISPR human genome editing has been discouraged by many leading scientists because of the possible adverse effects on humans. We haven’t agreed on this if this technology is a step towards future or this technology is just to overthrow current orthodoxy. We need to seriously consider the implications and outcomes of this modification. Moreover, serious thoughts must be given to the current regulations regarding these experiments.

Although the most of the research till now has been done how to eradicate diseases from human genes. However, it is possible that in future genome editing might be used to change human traits which is not natural or required. If this technology is used to eliminate harmful genes or to increase resistance against diseases, then it will be accepted. However, there is possibility that it will open door to eugenics. It is possible that technology will be used in future to get desired characteristics in humans which many believe is unethical.

Another fear is that genetic information could be used in a ways that could hurt people such as to deny them to employment, health insurance, or education. This concern is fueled by news that health information is not completely private. So, fear of discriminated because one changed his/her genes is also true. Last but not the least, those who cannot afford to get desired genetic alterations may consider themselves as fairly disadvantaged. (Clayton, 8)

Our brief discussion discuss CRISPR, genome editing, its benefits, risks and ethical issues. As a researcher I think CRISPR is a genome editing technique which is now very popular because of its simplicity and effectiveness. It is a future step towards our ability of altering genes of humans, plants or animals. There are a lot of benefits of this process. However, there are also some serious questions raised over the process. Proper regulations, extent to which scientists can experiment and responsible extent to which science must exercise its depth are the things which must be looked.