Home > Subjects > Economics > Causes of African Immigration to the USA 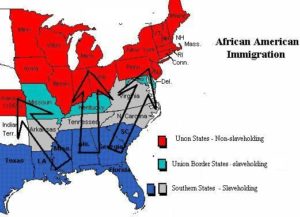 further their education. There are those who also moved to use to advance their careers in sports and other disciplines. There are Africans who immigrated to the US and have since changed their citizenship while others are still nationals of African countries. The term African is used in this context to refer to a geographical location as opposed to ethnic affiliation. The number of Africans immigrating to the United States is growing day by day. The first group of Africans moved to the US during the Trans-Atlantic trade as slaves in the 16th century. Most of them who survived acquired US citizenship and became nationals of the United States.

African Americans have always fought for equal opportunities and respect in the US. Their support for the American culture has changed the society of the American people today. Their impacts have been felt in almost every industry including sports, education, and entertainment among others.

Various economic factors have made Africans move to the US. Most Africans move to the US to seek greener pasture. The African economy is usually mismanaged. Most of their governments are corrupt. In this case, it becomes expensive to invest in most African countries. As such, they opt to move to the USA and other democratic countries in Europe. Moreover, the United States provide a favorable business environment where foreigners are allowed to invest in various industries. The GDP in most African countries is also low that does not favor the everyday comfort and personal satisfaction of most Africans. Besides, it does not offer a full market for manufactured goods. On the other hand, the United States of America provides a wider market for various manufactured goods which are imported from the developed nations in the world. In the 20th century, most African countries were affected by political coups. Various governments were overturned forcing the learned Africans to migrate to open nations such as Germany, Canada, and the United States. As such, they find the opportunity to further their studies (Konadu., et al, 2006). Some of them have become renowned academicians in the United States universities. During the war, some countries also find it difficult to export their products thus affecting their balance of trade. For instance, Sierra Leone which relies upon jewels as a primary source of income is significantly affected by the war. Therefore, their movement to the United States will allow business persons to conduct their business activities in a friendlier environment. As such, they can contribute and assist their country’s economic growth.

The political environment in most African countries is not favorable for business activities compared to the United States. Besides, most African countries do not practice democracy like the Western European countries and the United States. Most of the people who are against the government policies are forced to move to the US to seek political asylum. The new political wave which happened in the year 1980s saw most Africans moving to the US to escape persecution in their various countries. For instance, Zimbabwe has had one president since independence. The incumbent has reviewed the constitution several times to favor his stay in office. The liberal citizens of Zimbabwe, therefore, move to the US to enjoy political freedom, invest and further their education. The political instability in various African countries such as Somali, Central Africa, and Egypt is also a contributing factor to the cause of African movement to the United States. The United States has a stable and democratic political environment that caters for the interest of immigrants (Konadu.,et al, 2006). Besides, the Constitution of the United States also favors the plight of the immigrants. The American Society is friendly to most of the immigrants since they are given various privileges that they cannot enjoy in their warring countries. After settling in the United States, most of them find the opportunity to further their education, conduct business, and even secure employment opportunities.

Egyptian Migration to the USA

Most Egyptians started to go to the United States during the 20th century. Most of them migrated to acquire education and conduct business activities. The Egyptian economy become under financial stagnation for several years. As such, most business people were forced migrate to the United States to continue with the business activities. On the other hand, the Immigration and Nationality Act of 1965 allowed the Egyptian professionals and the skilled workers to move to the United States to seek employment opportunities. The terms of service in the US are more favorable compared to the Egypt. As such, this becomes a motivating factor, and several Egyptians found it easy to immigrate to the US. Today, the Egyptian population in the United States comprises of over two million Egyptians. The economic stagnation prompted most Egyptians to move to various prosperous nations where they could further their skills, education, and knowledge in their respective professions.

The movie depicts the Rwandan Genocide that took place in the year 1994. The genocide began after the plane that carried the president of Rwanda was shot down in April. The then president belonged to the majority Hutu community. The Hutus faulted the Tutsis for the murder. As such, they began a mass killing so as to eliminate all the Tutsi people in Rwanda. This movie depicts the state of political instability in African countries that prompt them to move to the Western democratic countries and the United States.

The story describes one man named Paul Rusesabagina, an administrator of an adequate lodging in Rwanda, generally taking into account white visitors (Kayihura, 2014). Paul was conceived a Hutu. However, he is hitched to a Tutsi. Hence his kids are viewed as a blend. At the point when the genocide started, a considerable lot of Paul`s Tutsi neighbors took shield in his home, however when the area wound up plainly scoured by the Hutu rebels he needed to reward the make a beeline for permit him to take his family and companions to his lodging. Since U.N Peacekeeping troops ensured the inn, many different Tutsi`s started to take asylum in it, bringing the resort over the limit. Outside governments sent in different troops giving the Hutus and Tutsis some false impressions.

The film is a replica of the political and economic hardships that Africans do experience in their home countries. The constant conflicts and the poor economy always motivates the Africans to move to the US for greener pastures.

Illegal Immigration in the USA | Impact on Unites States Economy