Process Improvement in the Production of Samsung Galaxy Note 7 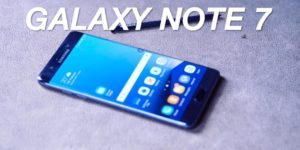 Samsung Note 7 Phones are catching fire” authored by Sean Hollister and published on C/net news website on October 10, 2016. Samsung is a multinational firm with headquarters in Samsung town in Seoul, South Korea. The company was established in 1938 by Lee Byung-chul as a trading firm. Samsung started venturing in the electronics industry in the 1960s. In the 1970s, the company ventured into the ship-building and construction industries, which contributed to its massive growth. After the death of Lee in 1987, the company separated into four groups, namely Hansol Group, CJ Group, Shinsegae Group and Samsung group. Since 1990, Samsung has been giving much concentration to the electronics of different types. Today, the company manufactures products such as televisions, radios, mobile phones and household appliances. The company’s subsidiaries are present in the international market in all continents. The subsidiaries of the company include Samsung Electronics, Samsung Engineering, Samsung Heavy Industries, Samsung C&T Cheil World Wide and Samsung Everland. In the global electronics industry, Samsung electronics is 4th largest in terms of market value and was the largest in terms of revenue in 2012. One of the major products that have been contributing to the revenue of Samsung is its Galaxy mobile phone brand. In fact, Samsung is renowned world-wide for producing high quality Galaxy phones. Recently, however, a defect issue emerged with one of its latest Galaxy products, Galaxy Note 7, which exposed problems in manufacturing process. The issue led the company to decide to recall the product just a few months after releasing it. If not properly addressed, the issue will have a major negative impact on the company.

The Galaxy Note 7 has a quality issue because the device has not satisfied the quality standards expected of it. From a quality management perspective, Samsung clients are not satisfied with the performance of the device. The decision by the company to recall the device and issue refunds is intended to guard its brand in the competitive Smartphone market. It is apparent that the Galaxy Note 7 failed to meet both the quality of design and quality conformance. The quality of design is linked to the characteristics of the device intended by the manufacturer. This comprises performance, reliability, features and aesthetics. In the case of the Galaxy Note 7, it reliability and performance failed to meet the manufacturer’s intended quality because the battery explodes when charged. Additionally, the device failed to meet quality conformance because it did not conform to the manufacturer’s design specifications. Samsung will incur external failure costs due to the failure of the Galaxy Note 7 to meet the intended quality standards. External failure costs are incurred when defects are discovered after the customer receives the product, which was the case with the Galaxy note 7. These costs will comprise replacement, recall costs, repair, and lose of goodwill by customers.

In order to understand why the batteries for Galaxy Note 7 explode, it is vital to understand the science behind the issue. The explosion is caused by the chemicals that are used to make the batteries. The chemical reactions that occur in the batteries release of energy. A phone battery is made up of two electrodes, a cathode and an anode. The cathode holds ions that are positively charged and it is connected to the positive (+) side of the battery. The anode holds ions that are negatively charged and it is connected to the negative (-) side of the battery connection. There is an organic solvent called electrolyte between the two electrodes. Electrolyte usually contains lithium or other metallic salts. The content of electrolyte enables it to conduct electricity. Both the anode and cathode electrodes are surrounded by electrolyte, but there is a physical barrier between them. As such, the two electrodes cannot touch each other. However, ions can move from one electrode to the other. The electrolyte usually contains lithium ions. During charging, the cathode makes the lithium ions to have a positive charge. The positively charged ions are then attracted by the anode. When the battery is being used, lithium ions move to the opposite direction. Even though the two electrodes exchange ions, they should not come into contact.  If they come into contact, they release energy that is directed to the electrolyte. Lithium, which is contained in the electrolyte, is very reactive, and it can catch fire easily when extra heat is added to it. This explains why there is a need for a strong physical barrier between the two electrodes.

Analysis of the Issue

Apparently, the defect with the batteries for Galaxy Note 7 emerged from a flaw in the manufacturing process. The presence of the defects indicated that the company failed to follow important production process and quality control procedures and activities. Samsung could have prevented the problem through testing the effectiveness of the batteries during the manufacturing process. Although Samsung stated that the rate of defects was around 0.01 percent of the total production, the defective phones can lead to a major negative impact on its reputation. Eventually, the organization will lose customers and its sales volume will reduce significantly. There are effective OM techniques that enable firms to prevent similar mistakes as Samsung when launching new products. One of the most effective techniques used widely is Advanced Product Quality Planning (APQP). APQP is a process that is applied during the production of new products to test their viability during the design phase and all other phases before the product is launched. In the case of Samsung, it should apply the APQP process when producing new batteries for its products in the future.

When APQP process is integrated in process and product design during manufacturing, it enables firms to supply products that satisfy the customers. The main aim of planning is to enhance corroboration and communication between engineering activities. In APQP process, marketers, manufacturers, distributers, procurers, product designers and other stakeholders in firms involved in manufacturing processes work together as a team. This helps to ensure that the voice and needs of the consumer are well understood and translated into technical specifications, requirements and special characteristics. APQP helps to identify the need for a change in the design of a product or any other aspect of a product.

Figure 1.0: The phases of APQP process 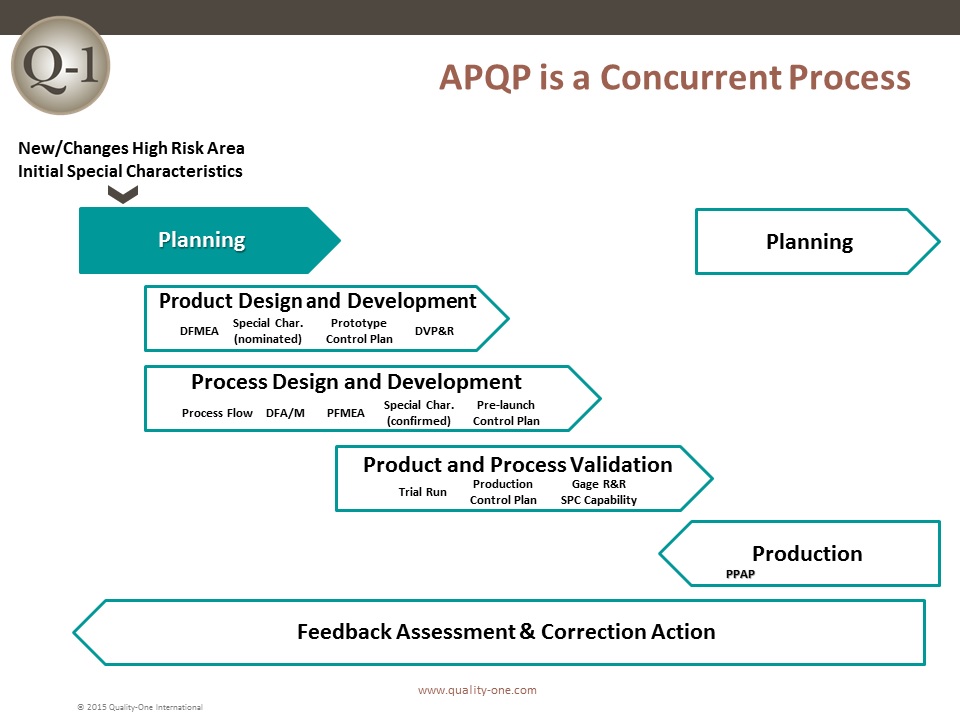 The preplanning process involves gathering and compiling knowledge about a product that is intended to be designed. The knowledge is derived from previous production processes, books and other sources. The knowledge gained during the preplanning process is used as input in the plan and define phase. In the plan and define phase, all the needs, desires and requirements of the consumers are put into consideration. Product process and resource planning process assumptions are made. During the same phase, a list of design/reliability goals and preliminary special characteristics are established. The effectiveness of the plan and define process influences the extent to which a product will be satisfactory to the consumers. During the next phase of product design and development, the design of the product is made. The designers carry out a formal review of fine details, geometrical measures, design features, special characteristics and tolerances of the product intended to be developed. Frequent tests on design and verification of prototypes are made frequently during the design and development phase. In this phase, the tools that are used include Design for Manufacturability, Design for Assembly and Design Failure Mode and Effect Analysis.

The next phase is process design and development. This phase involves exploring the measurement methods and manufacturing techniques that will suit the vision of the designers of a product and put the product into reality. Among the tools used in this phase are Control Plan Methodology, Process Failure Mode and Effects Analysis and Process Flow Charts. The next phase involves product and process verification. The focus of this phase is to validate volume capabilities and process quality. Process Capability Studies, Management System Analysis and Statistical Process Control are among the tools used in this phase. Product Part Approval also takes place in this phase. The last phase is Feedback Assessment and Corrective Action. This phase involves assessing the ongoing manufacturing process and taking corrective actions where they are needed. Eight Disciplines of Problem Solving are applied in this phase. There are detailed inputs for each of the phases described above.

Overall, Samsung is a renowned company that has presence all over the globe. Among other products, the company sells mobile phones in the international market. Samsung Galaxy Note 7 is one of the products launched by Samsung recently. Despite having a good reputation of producing quality products, Galaxy Note 7 had a major defect in its batteries that prompted for a recall soon after the release date. The problem emerged from a failure in the manufacturing process. The company seems not to have applied the important OM tool used by firms when manufacturing a new product, called APQP. APQP helps in improving manufacturing process and product designs during the production and hence, avoid quality issues. Thus, Samsung should apply APQP to improve its new batteries and other products in the future to avoid making similar mistakes. 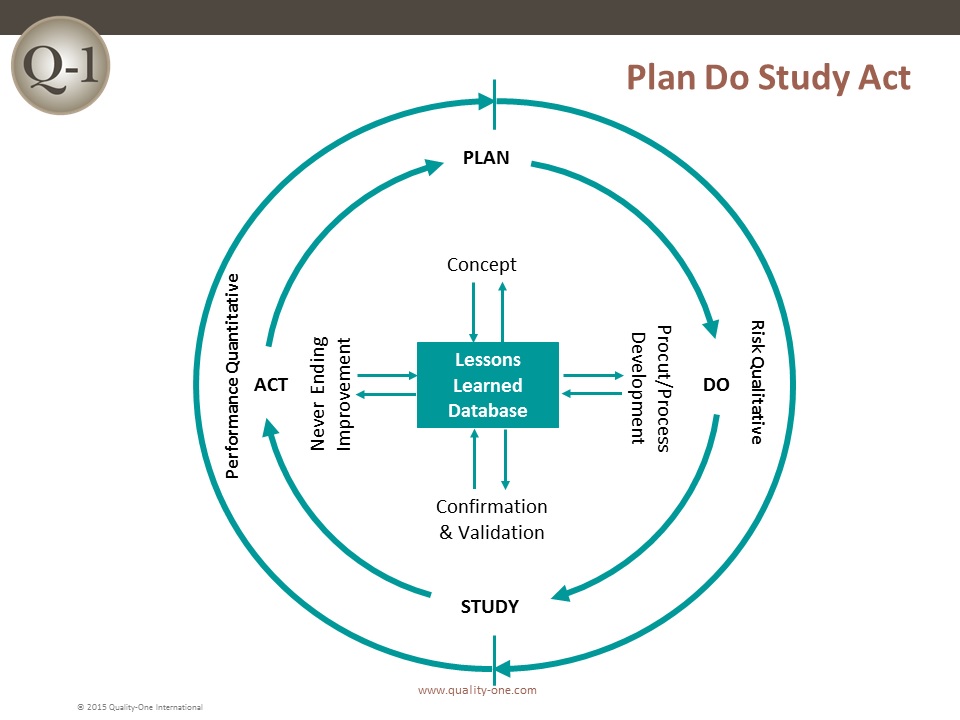 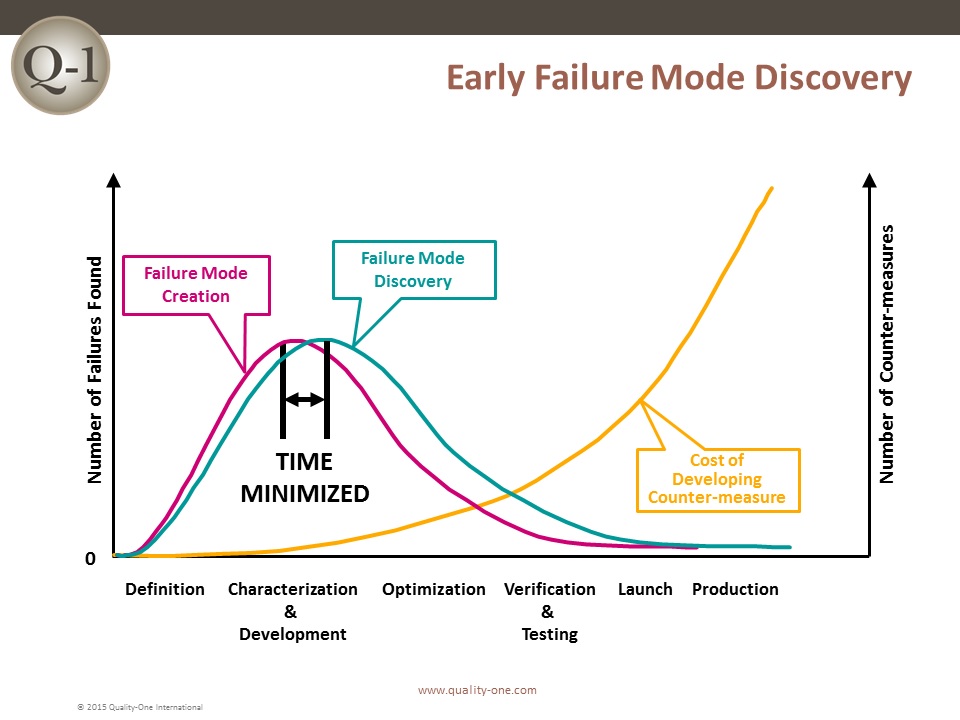