The Coca-Cola Company is the world’s largest beverage company. It owns or license and market more than 500 non-alcoholic beverage brands, primarily sparkling beverages but also a variety of still beverages such as waters, enhanced waters, juices and juice drinks, ready-to-drink teas and coffees, and energy and sports drinks. Company owns and market four of the world’s top five non-alcoholic sparkling beverage brands: Coca-Cola, Diet Coke, Fanta and Sprite. Finished beverage products bearing our trademarks, sold in the United States since 1886, are now sold in more than 200 countries.

The Coca-Cola Company makes branded beverage products available to consumers throughout the world through our network of Company-owned or -controlled bottling and distribution operations as well as independent bottling partners, distributors, wholesalers and retailers — the world’s largest beverage distribution system. Beverages bearing trademarks owned by or licensed to us account for 1.9 billion of the approximately 57 billion servings of all beverages consumed worldwide every day. Company believes it success depends on our ability to connect with consumers by providing them with a wide variety of options to meet their desires, needs and lifestyles.

Its success further depends on the ability of people to execute effectively, every day. Company was incorporated in September 1919 under the laws of the State of Delaware and succeeded to the business of a Georgia corporation with the same name that had been organized in 1892.

The Coca-Cola Company and its bottling partners developed a 2020 Vision in 2009. This vision is a roadmap to doubling their global system revenues in the next 10 years by focusing on six key areas: profit, people, portfolio, partners, planet, and productivity.

The mission statement of the Coca Cola Company is:

The Coca-Cola Company is a leader in the beverage industry with a reputable brand and strong global presence. 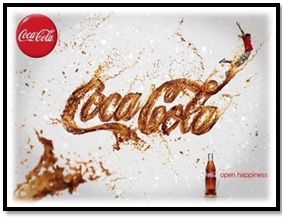 According to the Coca-Cola Company’s mission statement and 2020 Vision, some of its goals include: 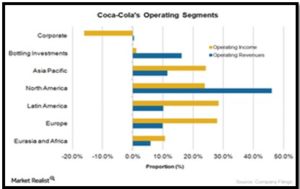 Except to the extent that differences among operating segments are material to an understanding of our business taken as a whole, the description of our business in this report is presented on a consolidated basis.

The Coca-Cola Company’s annual advertising spending was US$3.499 billion, US$3.266 billion and US$3.342 billion in 2014, 2013 and 2012, respectively. Advertising expenses accounted for 6.9% of total revenues each year. In 2014, The Coca-Cola Company was the largest advertiser in the beverage industry in the world. The company’s large advertising budget provides competitive advantages such as:

The company wields considerable financial muscle with strong acquisition capability and funds for marketing, which are crucial for expansion and retaining consumer loyalty during a time of difficult market conditions.

The company has a very strong global geographic mix. Large volumes of sales are made outside core developed markets, vastly improving the company’s resilience to regional economic downturns.

While company has expanded its soft drinks portfolio of late, it remains highly dependent on carbonates. Hence, it is vulnerable to a downturn in this category.

As consumer awareness of the risks of a high sugar diet has grown, the sugar content of regular Coca-Cola could hinder the company as the consumer agenda increasingly switches to looking for healthier food and drink options.

A growing trend in soft drinks is that of health and wellness. Consumers increasingly understand the importance of healthy diets and are actively looking for healthier drinking options.

India and China, in particular, represent good volume opportunities. Carbonates, juice drinks and bottled water should be the focus for the company.

PepsiCo remains a considerable foe in soft drinks and having stolen a march in terms of bottler buyouts, it has possibly a crucial advantage in terms of repositioning itself in a redefined marketplace.

In some cases, and in particular in low calorie carbonates, the company’s brands can sometimes be found in direct competition with each other and at risk of cannibalisation.

Behaviour of the company: Company’s inclusive culture is defined by our seven core values: leadership, passion, integrity, collaboration, diversity, quality, and accountability. Its central promise at The Coca-Cola Company is to refresh the world in mind, body, and spirit, and inspire moments of optimism; to create value and make a difference. Two assets give us the opportunity to keep this promise – its people and its brand. The Coca-Cola Company leverages a worldwide team that is rich in diverse people, talent and ideas.

As a global business, company’s ability to understand, embrace and operate in a multicultural world — both in the marketplace and in the workplace — is critical to our sustainability. Its diversity workplace strategy includes programs to attract, retain, and develop diverse talent; provide support systems for groups with diverse backgrounds; and educate all associates so that we master the skills to achieve sustainable growth. We work hard to ensure an inclusive and fair work environment for our associates, all of whom undergo diversity training on a regular basis. We find ongoing dialogue leads to better understanding of our colleagues, our suppliers, our customers, our stakeholders, and ultimately, to greater success in the marketplace.

The Coca-Cola Company values all employees and the contributions they make. Consistent with this value, the Company reaffirms its long-standing commitment to equal opportunity and affirmative action in employment, which are integral parts of our corporate environment. The Company strives to create an inclusive work environment free of discrimination and physical or verbal harassment with respect to race, sex, colour, national origin, religion, age, disability, sexual orientation, gender identity and/or expression, genetic information or veteran status. We will make reasonable accommodations in the employment of qualified individuals with disabilities, for religious beliefs and whenever else appropriate.

In order to achieve its goal of doubling the revenue in ten years, Coca-Cola needs to sell its products in new geographic areas and expand its product like that meet the consumers’ changing preference and behaviours. Maintaining its current market size in the developed market, the company also needs to increase sales in developing markets.

Carbonated beverages are the company’s bread and butter business so that the company is heavily relied on their sales. This implies that the company needs to increase awareness and sales on other drinks, such as bottled water, juice, ready-to-drink tea, and even Asian specialty drinks since the consumer preferences are changing. Moreover, in order to maintain their share of sales in the increasing competitive market, Coca-Cola has to continue to strengthen their brand loyalty, innovation, and expand into other product categories in the beverage industry.

As consumers have growing concerns about their health, such as obesity issues, which results in a reduce demand of standard cola. Therefore, the amount of sugar in regular soft drinks needs to be reduced accordingly. Although the introduction of the diet cola successfully addressed this issue, the increasing demand and sales of diet drinks cannibalized the sales of standard cola. The company needs to find a way to sustain their revenues while anticipating consumers’ preference changes.

With the strong penetration power in the mature soft drinks industry, the Coca-Cola

Company’s revenue growth can be generated from secondary markets or new markets. However, in developed markets, an acquisition option is limited because of market consolidation. It is challenging for the company to make large acquisitions in all markets.

Position of Company in next 10 years:

The Coca-Cola Company has a strong history. Coca-Cola has 30% market share of the global beverage industry.  If the company maintains its global market share up to 2020, it will add $90 billion to its market cap based on the expected increase in global beverage value. Coca-Cola has a market cap of $183 billion, giving it an expected compound growth rate of 6.9% (not including dividends and share repurchases) up to 2020 if it does not gain market share. I believe Coca-Cola will continue to gain market share and reward shareholders with share repurchases and dividends, driving up the company’s CAGR into the double digits for the next several years.

Governments all over the world are publicising obesity concerns and the sugar content of soft drinks has come under increasing scrutiny. The Coca-Cola Company (TCCC) has already developed low and zero calorie drinks that are the top-ranked brands within their categories. However, the company should continue to research low calorie drinks and in particular, natural low calorie options such as those using Stevie and more recent development monk fruit.

Areas such as “better for you”, “naturally healthy” and “fortified/functional” fit well within soft drinks formats. TCCC already has a range of juices and waters that could prove to be future winners for the company, but it must continue to develop and innovate new HW angles within its brands. A key growth area could be fortified/functional drinks, where opportunities to add new functional ingredients are continually being discovered

The popularity of carbonated soft drinks has waned in many markets, or has at least seen a slowdown in growth. TCCC should look to expand its sales of other beverages. Categories in which the company is not dominant globally include RTD tea. Pushing development in these categories would provide a holistic growth opportunity into the all-important Chinese and Asia Pacific territories. Dairy is another area TCCC should explore further following the equity investment in Core Power.

Shareholders of Coca Cola will likely be rewarded in the future with a double digit compound annual growth rate resulting from dividends, share repurchases, growing market share, and tailwinds from growth in the overall beverage industry in the developing world. Coca-Cola often ranks as a Top 10 dividend growth stock for long-term investors using The 8 Rules of Dividend Investing.