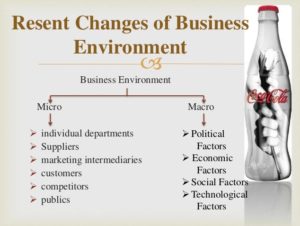 The company’s micro environmental factors comprise of the customers, employees, competitors, shareholders, suppliers and the media. The Coca-Cola Company is working on a customer strategy which is aiming to expand and develop the status of its brand in the global market (Morrison, 2011). Over the last five years, the company has invested in marketing promotion as a customer growth strategy. For doing this, they have established a huge consumer base in various national and international markets in the over 200 countries where they operate. Since the year 2005, they have experienced a continuous percentage increase regarding customer loyalty. It has used various market segmentation strategies to attract more customers and increase the sales. The company has also put in place various policies that encourage employee participation in decision making. As such, they have continued to experience improved productivity over the last decade.

On the other hand, the macro environment of the company comprises of various external factors that affect the organization’s policy regulations. Such factors include government policies, inflation rates, import and export management, foreign exchange rates, varying demand and supply conditions, technological and legal factors. The company has invested in technology, and this has seen it experience potential growth. For instance, it has used the Franco technology to increase its production. The company has responded positively to various external factors to enhance its growth in the international market. Coca-Cola has managed its external environment so as to effectively compete with its rivals such as Pepsi and Miranda among others.

The Coca-Cola Company has used various innovative strategies to ensure that it remains ahead of its competitors in the market. The company has managed to produce a variety of brands that meets the needs of various customers. For example, it manufactures both still and sparkling beverages. Besides, the taste of coca-cola is unique that its competitors have never found it easy to replicate. The company is committed to innovative strategies that would reduce their environmental footprint and increase economic development in various countries where they operate. Over the last decade, the company has managed to produce non-calorie beverages such as coke diet, coca-cola zero and vitamin water (Butler & Tischler, 2015. Besides, it uses a timeless font written in the Spenserian script to differentiate it from its competitors. The innovative strategies utilized by the company have seen it become one of the valuable companies in the world.

The Coca Cola Company uses various entrepreneurial skills to establish and sustain itself in one of the most competitive industries. The company produces over 500 still and sparkling brands which serve an estimated population of 1.9 billion people each day. The company has differentiated its market in such a way that it can serve various market segments depending on their tastes and preferences. Its brands range from its most valuable brand coca-cola to ready-to-drink coffees, juices, and non-calorie drinks such as diet coke and coca-cola zero. It also produces Dasani which is a mineral water and the vitamin water. The entrepreneurship skills allow the company to serve over 200 countries in the world.