Coca cola is the largest beverage company. It produces over 500 brands.  The company operates in more than 200 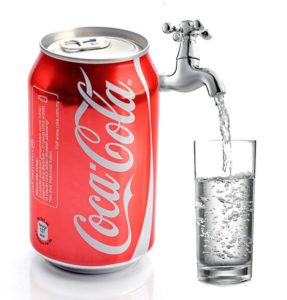 countries. The company has its headquarters in Atlanta, Georgia, United States (Anderson, Sweeney, Williams, Camm, & Cochran, 2014). The company started its operation s in the in 1886, and the first beverage was invented by a pharmacist John Stith Pemberton. In the last financial year (2016/2017) the company recorded net annual sales of $ 41.86 billion. The company has experienced continued growth over the last years. The annual growth earnings in the next ten years are estimated at 6.21%. This year, the earnings growth rate is forecasted at 4.72%. Coca Cola is a multinational company. It manufactures and markets its beverage products. The company has about 146, 200 employees working in different countries.

The coca cola company manufactures various brands. The most popular brand is Coca cola. Other brands include Sprite, Fanta, diet coke, coke zero, Dasani, Minute Maid and Ciel among others (Anderson, Sweeney, Williams, Camm, & Cochran, 2014). Demand and supply are one of the most fundamental concepts of economics. They describe the market share of Coca cola in the market. Demand represents the total quantity of product desired by buyers. Supply is the number of goods that the market can offer. Coca cola has substitute products available in the market such as Pepsi and Miranda among others. If the price of coca cola products increases in the market whereas the price of substitute products remain the same, then the demand of coca cola will fall.

Various factors influence the supply and demand of coca cola products in the market. Income of the consumers has a direct relationship with the demand of the products of the company.  Coca cola is considered as a normal and good and increase in income leads to an increase in demand and vice versa. Tastes and preferences also influence the demand in the market. The loyal or hardcore consumers will consume the coca cola products even at high prices. In this case, the demand will remain constant. Lack of taste and preference among the consumers makes the demand to decline if price increases. Other factors that influence demand include time, government policies and age of the populations (Anderson, Sweeney, Williams, Camm, & Cochran, 2014).

According to the law of supply, if the price of the product increases, the quantity supplied in the market will increase since the supplier will need to make huge profits. This law holds for the coca cola products. If the price of the products increases, the supply will increase. However, continued increase in the price in the long-run will result in a decrease in demand for the products since consumers will go for the substitute products. Factors which influence the supply of coca cola products in the market include price, the state of the technology, price of inputs and number of consumers.

Coca Cola utilizes product differentiation and mass marketing to enter foreign markets (Pendergrast, 2013). The company manufactures products that adapt to its marketing strategy. The company can produce new products that suit the needs of a given market segment. It also utilizes competitive positioning strategy to achieve competitive advantage in the market and penetrate the international market.

Coca Cola is one of the recognized brands in the world. It is known for adhering to various ethical standards. It is also committed to giving back to the community where they serve. However, the company has faced different environmental concerns. For instance, the company has been accused of misuse of water and dehydration of communities where it operates (Karnani, 2014). In the pursuit of water, the company has been charged with affecting local agriculture. Moreover, Coca Cola has been accused of violating human rights in various countries such as Russia, Turkey, Guatemala and Colombia among others. It is evident that without water, the company cannot carry its business activities. The operations of the enterprise rely on a vast supply of water. The company utilizes three liters of water to manufacture one liter of coca cola (Karnani, 2014). As such, they have taken over control of water supply points in various communities around the globe. The operations of the company have been blamed for water shortages in regions with little rainfall and those that lack water sources. For instance, in India, there have been numerous community campaigns concerning how the company utilizes water in various states. The activities of Coca Cola Company have had adverse effects on local communities and farmers. The establishment of bottling plant in 1999 at Kaladera village in Rajasthan has made the state a desert (Karnani, 2014). The locals have not been able to get adequate water to sustain their crops and animals. As a result of continued campaigns by various communities, the company was forced to close its plant that was located in Plachimada in the state of Kerala in 2004. This is after the village council failed to renew the license to allow the company to continue its operations. They were accused of contamination of water resources.

The Business Environment of Coca Cola