Water contributes to many of the characteristics of meat products.
Approximately 65% of the weight of fresh meat is from water which is directly related to the protein content of meat. There is a constant relationship of about 3.7 to 1 between water and protein content in fresh meat.

In all living animals, water contributes to cellular integrity, meaning it provides the internal pressure to keep cells from collapsing on themselves. Water also provides lubrication for muscle fibers, allowing smooth contraction and release of muscle tissue.

Protein binds with water in the cell because of a polar attraction between water and protein molecules. When an animal is slaughtered, the ability of the muscle to retain water is reduced. Postmortem changes will affect water loss in fresh meat. Several techniques are applied after slaughter to reduce water loss.

Calcium ions promote the linking of actin and myosin, two types of muscle fibers, which begin to contract and are unable to release. The muscles will stay contracted until the muscle tissue begins to decompose, approximately 72 hours after death. Refrigeration and rapid cooling can delay the onset of rigor mortis, but the process will occur upon the thawing of the carcass. Meat is generally considered to be more tender if prepared after rigor mortis has passed.

Most of the reduction in water holding capacity of muscle is due to a decrease in the pH of the muscle. pH is a measurement of the acidity or alkalinity of a substance. The final water-binding ability depends on the rate and extent of the pH drop. When the pH drops rapidly during the conversion of muscle to meat (slaughtering), a lower water-binding capacity results.

The lowered pH is due to an accumulation of lactic acid, a product of glycogen metabolism, in the muscle of the animal. The lactic acid becomes concentrated in the muscle because the circulatory system, inactive after slaughtering, is unable to remove it.

As a source of protein, meat protein is the second largest component after the water one. Muscle protein is divided into 3 groups based on their solubility properties; firstly, sarcoplasmic protein (30%), myofibril protein (55%) and stromal protein or muscle tissue (15%).

Sarcoplasmic proteins are soluble in water and dilute salt solution contained in the sarcoplasmic. Myofibril protein is a protein-containing structures myofibril and is soluble in saline solution with a concentration of 1.5% or more. Stromal proteins are main constituent of connective tissue that is not soluble in salt solutions but soluble in alkali or acid treatment.Sarcoplasmic proteins include glyceraldehyde, aldose, enolase, creatine kinase, lactate dehydrogenase, pyruvate kinase, phosphorilase, myoglobin, calpain, chatepsin, extracellular proteins and membrane protein. Proteins are composed of myosin, actin, troponin, tropomyosin, M-protein, C-protein, Titin, Nebulin and Desmin. Myosin is the largest component in myofibril and dissolves into the solution with high ionic strength (greater than 0.3 M). Myosin has an important functional properties in meat, namely (a) is an enzyme with ATP-ase activity, (b) myosin form a complex with actin and (c) myosin form aggregate with each other to form filaments.

Muscle protein solubility is one of the factors influencing properties of water retention in the muscles and eventually affects meat quality. Physical and chemical bonding in muscle protein affects structural and texture muscle protein. There is a correlation between protein structure and solubility, and is related to tenderness or hardness of meat during processing and storage.

Other chemical components that are important in meat are fats. Although relatively few in amount, it is the 3rd largest chemical component in the flesh. Fat in meat has both beneficial and detrimental roles. One of the disadvantages is the oxidation. It affects meat processing. Fat is an important energy source because of the amount of energy produced can be doubled from that generated by proteins and carbohydrates. Fat in meat is generally in triglycerides form. The composition of triglycerides significantly determines meat tenderness and roughness. Fatty acid composition in each species is different and it is also has different effect on fat properties in each species. Total saturated fatty acids in sheep, cattle and pigs respectively 53%, 45% and 40%, while the unsaturated fatty acids respectively were 47%, 55% and 60%.

These substances fall into two categories: nitrogen-based substances such as free amino acids and vitamins, and carbohydrates such as lactic acid and glucose.

The major minerals consist of phosphorous and potassium together with small amounts of sodium, magnesium, calcium, zinc, and other trace metals. Thus meat is a good source of essential amino acids, minerals and vitamins, and a good source of energy (on average, beef yields 510 kJ and lamb yields 630 kJ per 100 g). All the essential amino acids required for life are present and highly bioavailable in raw muscle tissue. Iron, phosphorous and potassium (together with the sodium present in cured meats) are important minerals. Pork has a high vitamin B content, while liver is rich in a considerable number of vitamins, particularly vitamin A. Meat is an important dietary source of both vitamins B1 (thiamin) and B2 (riboflavin). 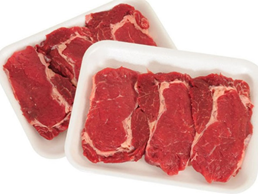 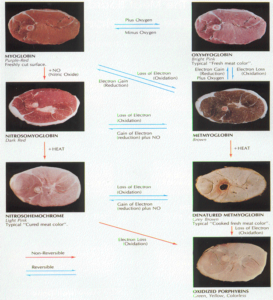