Meat curing is the application of salt, color fixing ingredients, and seasoning in order to impart unique properties to the end product.

The salting and smoking of meat was an ancient practice even before the birth of Christ. These early 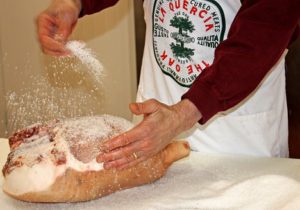 processed meat products were prepared for one purpose, their preservation for use at some future time. Salt was used at concentrations high enough to preserve the meat. Preservation by smoking is believed to have been developed inadequately by the primitive tribes. The American Indians preserved meat prior to settlement by Europeans by hanging it in the top of a teepee to maximize contact with campfire smoke. The origin of the use of nitrite is lost in history. Salt containing nitrates was used in Homer’s time (850 B.C.) to preserve meat. Nitrate was present originally as a natural impurity in the salts used in curing but, unknown to the users, was a key ingredient in the curing process. The Romans, who learned the art of curing meat with salt from the Greeks, were the first to note the reddening effect now attributed to nitrite. Although the role of nitrites in cured meat was not really understood until early in the 20th century, it is clear that for thousands of years nitrite has played an important role in meat curing.

The two main ingredients that must be used to cure meat are salt and nitrite. However, other substances can be added to accelerate curing, stabilize color, modify flavor, and reduce shrinkage during processing. Salt is the primary ingredient used in meat curing. Originally it served as a preservative by dehydration and osmotic pressure which inhibits bacterial growth. Salt still functions as a preservative in the “country style” cured meat product. The main function of salt in other cured products is to add flavor. However; even at low concentrations salt has some preservative action. Salt levels are dependent on consumer’s taste, but a two to three percent concentration in the product is about right. Nitrates and nitrites, either potassium or a sodium salt, are used to develop cured meat color. They impart a bright reddish, pink color, which is desirable in a cured product. In addition to the color role, nitrates and nitrites have a pronounced effect on flavor. Without them a cured ham would be simply a salty pork roast. They further affect flavor by acting as powerful antioxidants. Antioxidants are compounds that prevent the development of oxidative rancidity, which would reduce the keeping quality. Sodium nitrites also prevent the growth of a food poisoning microorganism known as Clostridium botulimum, the bacteria that causes botulism. Nitrates and nitrites must be used with caution during curing. They are toxic when used in large amounts. The Federal and State Meat Inspection regulations limit the amount that can be used in curing. It is important that exact amounts are used and the curing mixture is thoroughly mixed. The use level of sodium nitrate or potassium nitrate (saltpeter) is 3 1/2 oz. per 100 pounds meat for dry cure or 7 pounds nitrate per 100 gallons pickle (liquid cure) at 10percent pump level. The use of sodium or potassium nitrite is limited to 1 oz. per 100 pounds meat for dry cure, or 2 pounds per 100 gallons pickle (liquid cure) at 10percent pump level. Nitrites combined with nitrates should not be greater than 156 ppm ingoing into hams or 120 ppm ingoing into bellies. Sugar (sucrose) serves several important purposes in cured meat. First of all, it adds flavor, and secondly, it counteracts the harshness of salt. Also sugar provides a surface color characteristic of aged ham if caramelized sugar is used. Both brown and white sugars can be used. The sugars most frequently used are sucrose, cane sugar, dextrose, and invert sugar. The amount of sugar used is selflimiting due to its sweetening power. Ascorbates (sodium ascorbate or sodium erythorbate) are used to speed the curing reaction by faster color development through more rapid reduction of nitrates and nitrites to nitric oxide. The nitric oxide combines with the meat pigment, myoglobin, to form nitrosomyglobin, dark red color. When the product is heated to 130-140°F the nitrosomyoglobin is converted to a stable pigment, nitrosohemochrome light pink in color. Also ascorbates are used to stabilize cure color of meats. The most frequently used cure accelerator compounds are sodium ascorbate or sodium erythorbate. Curing pickle containing these compounds should be used within 24 hours because their reaction with nitrite will lower the nitrite level of the pickle and its effectiveness. The ingredient phosphate should be used only for those meats cured with a liquid cure. Phosphates are adjuncts used to increase the water holding capacity of cured products. In

creased water holding capacity will increase yields of product and improve retention of brine. Phosphates are not easily soluble in a pickle. It is recommended to dissolve the phosphates first then add it to the pickle. Sodium tripolyphosphate, sodium hexametaphosphate, and sodium pyrophosphate are approved by USDA for use in meat curing. Water must not be taken for granted as an ingredient of curing pickle (liquid cure). It acts as a carrier of the other ingredients, influences composition of the meat, and it may contribute to palatability or juiciness of the product. Yield of finish product is dependent on amount of water retained during the curing and cooking process. Such yields are critical in determining the price of the finished cooked product.

Best used to cure hams, bacon and smaller cuts of meat, dry curing involves applying the cure mix directly on the meat. After the application, place meat into a plastic food storage bag and tightly seal. From there, put your meat in the refrigerator and let the curing process take place. After curing, remove excess salt by rinsing your meat. The final step is to cook your meat and taste.

Also called the sweet pickle cure, brine curing is also a favorite for curing meat. This method involves combining curing salt and water to create a sweet pickle solution. To prepare the brine, use a large non-corrosive bowl, such as plastic or glass. To cure, inject the brine solution into the meat using a meat pump or soak the meat over a period of time. If you choose to soak, be sure to fully submerge the meat. A plate can be used as a weight to keep the meat immersed in your brine. Like dry curing, the process takes place in the refrigerator and the cured meat needs to be cooked when finished.

When you couple the dry rub cure and brine solution injections, the result is combination curing. Used to cure hams, this method shortens the curing time and reduces the risk of spoilage because the process takes place both inside and outside the ham. Again, curing is done in the refrigerator and the ham is cooked thereafter.