Accident means a traffic or motor vehicle collision, which occurs when there is the animal, road, 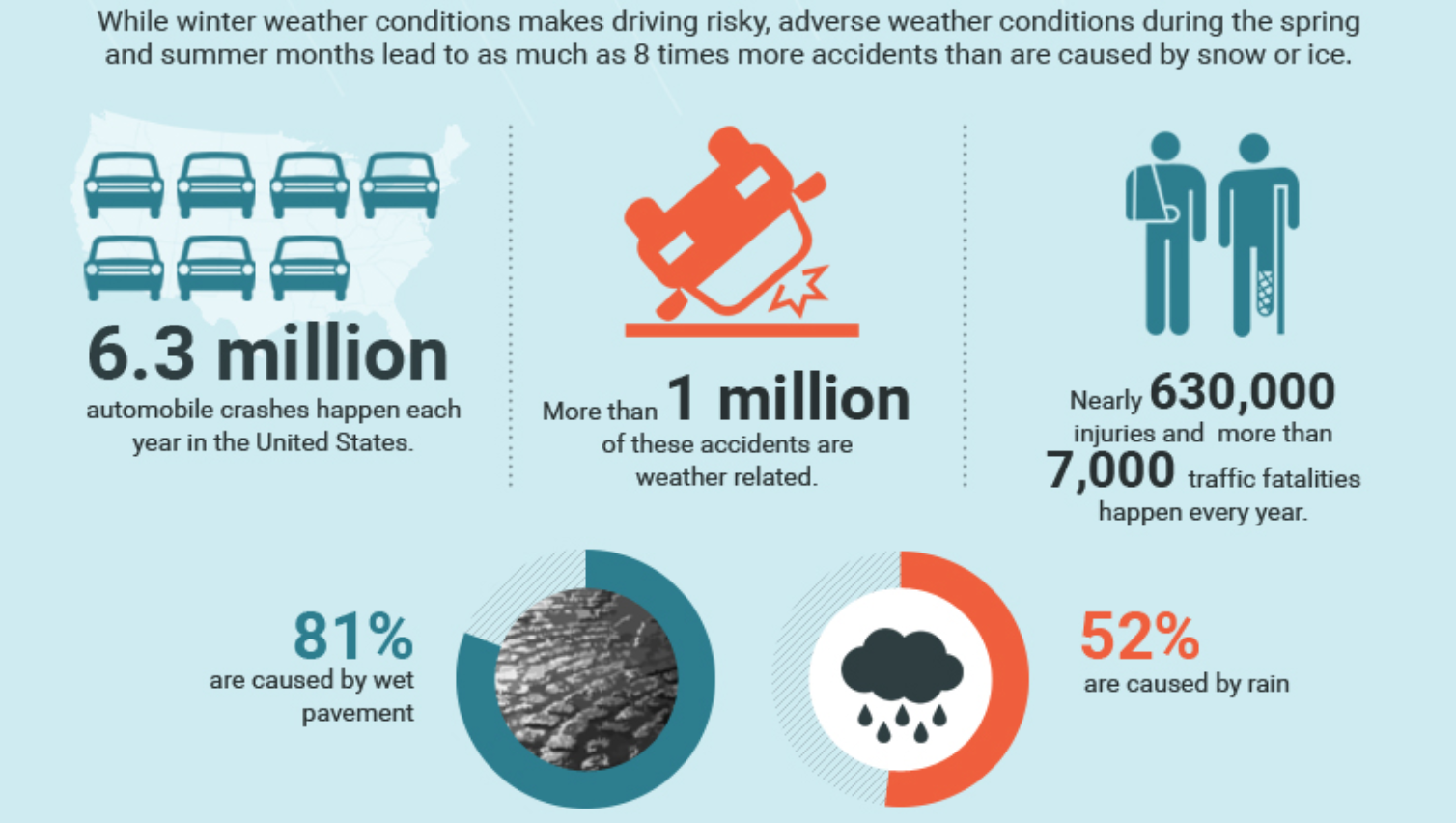 object like the tree, pedestrian, or another vehicle collides. However, the result of the traffic collisions may result in the injury, property damage, death etc. There are a number of factors or causes, which can result in the collision, however, a survey indicates that there are road injuries and about 54 million people suffered injuries in recent years.  Road design, driver skill, road environment, alcohol and drug behavior, street racing can result in the motor vehicle collision. There could a bad weather, and the weather-related accidents are there, which can take place due to air temperature and humidity, wind speed, fog, rain, ice, snow, water level, precipitation.

The research of Jonestown in Travis Country, TX has shown the number of accidents every year as in 2002 the number of accidents due to wet weather conditions were, 26 and 2007 were 2. However, due to the dry weather conditions, the numbers of accidents in 2002 were 22 and in 2007 were 19. The weather has affected the people and there were numbers of deaths take place, however, the people are affected by the weather because they do know about the safety purposes (Smit & Prozzi, 2013).

The result has also shown that there is the reduction in the wet weather accidents by using the porous friction courses (PFC). If you can see the above statistics there is the reduction in 2007, by using the PFC. However, the statistics show that in the dry weather condition, there were 5 deaths in 2006 and in the wet weather conditions there was only 1 death in 2005 and 2006. The projects performance is good because it includes the safety aspects and guides the drivers (Smit & Prozzi, 2013).

There are the fundamental factors of the traffic accidents, Human fault is the major causes reveals in the research are the psychology, age, gender etc. because the drivers do not know that when what to do if the weather conditions are not favorable.  As the human beings are also responsible for the weather condition, as if, they do not turn on the lights of the cars. There are the minor faults, by the drivers, which can be problematic, the driver sometimes uneducated, or do not the license. The fault analysis is done, as the drivers fail to manage the system of the cars, and they do not know that how to set the car or vehicle according to the road or weather conditions (Karacasua & Er, 2011).

The research of Turkey, on the vehicles and accidents, illustrate that drivers are illustrated and they do not know how to adjust the vehicle speed, in accordance with the conditions of the weather. There are the technical characteristics of the vehicle which a driver should know and need to know that how to adjust the vehicle. However, the failure to manage the safety distance, in accordance with the weather, speed, vision, a road is can create the problems, for the drivers (Karacasua & Er, 2011).

Weather can diminish the visibility, as, during the storm and snowstorm, there are possibilities or greater risks of the accidents. However, falling snow can make or create the difficulties for the drivers and they could not see, the snow can combine the dirty water and it could be there on the windscreen, however, the windshield can become dirty and impair the visibility of the driver. The bad weather condition is more difficult for the drivers, as it is difficult to stay on the roads, it can diminish the traction, the signals, and objects on the roadways, cannot be seen, the speed cannot be adjusted in this way, or the driver can go out of speed due to unfavorable weather or wet road conditions.

In the cross wind conditions the driver can face more issues there can be the strong or sudden cross wind, the snow can also blow across the roadway, which may create visibility impairment in the drivers, however, road surface can also have the patches of ice. During the changes in the season, the driver respond to the poorly weather conditions as the weather conditions can be unusual for the location, there could also be the dangerous weather after the heavy rain, when there is the dry spell, moreover, the first snowfall of the year, can also create problems, for the drivers.

There could be the visibility impairments, through the high wind, temperature, and perception, there could be effects on the driver capabilities and his performance can be affected. Several studies have stated that driver behavior can be affected by the rainfall and snowfall and there are chances of crashes. In rural areas, the drivers do not reduce the speed and it is being analyzed that driver cannot compare the dry pavement and the wet pavement; however, the accident can occur or chances for risks increases. It is conducted that driving in rain increase the risks of accidents, especially in the heavy traffic.

The weather has affected the visibility of the drivers, due to which they face the issues and have to face the deaths. The studies have shown that the there are 70% risks increases during the waterfalls because a driver cannot see the windscreen clearly, however, on very wet days, the ratio of accident increases and the injuries are there (Karacasua M. , Er, Safak, & B.Barutb, 2011).

The researcher has shown that there are accidents due to rain, as the streets become dangerous and the surface become more treacherous on the rainy days, however, the vehicle accidents can be there. The rainy conditions are very dangerous, as the wet pavement are not appreciated by the driver, there are risks and fear, however, rainy weather can cause hazards, which include the decreased visibility as the drivers cannot see the clear image, the trees, and other objects are difficult so see.

There could be hydroplaning, by the tires, as the road surface is not favorable, there is the decreased in the tire traction, as there could be the loss of control and the car speed could be uncontrolled. Moreover, water on the roads can create more problems, like there could be the break failure due to the wet brakes and drivers can make a sudden break, because the road is slippery, there could be issues with the break, the windows sometimes are not defog, from which visibility is not clear (Régine, Simon, & Maurice, 2015).

Rain could be more dangerous at night, as the headlights reflect the objects back to your eyes, the dirty water sometimes make the windscreen dirtier, which can impair the vision of the drivers. Rain can impair the vision in many ways, as continuous splashing of the rain can scatter the lights and distorts the visual scene image. However, the maximum amount of light can affect the eyes of the driver, the level of dark adoption can be more at the nights, or if it is raining in dark.

Fog reduced the visibility as the distort the perception and limit contrast, for can be very dangerous because the objects are not clear, even driver sometimes unable to the object, which is in front, due to less visibility. Fog have very fine moisture droplet, in the air, which can dense the white background, however, in such conditions the car accidents can become more prone or there could be the greater possibility than the normal.  Fog creates the thick blanket on the roadways and scatters the things.

There are the winter maintenance tips, as in the winter weather can affect on the vehicles and on the drivers. The driver needs to be calm while driving the cars, as, during the flood, storm, rain or fog, there is the need to avoid the water. The drivers need to reduce the speed on the highways, as there could be the loss of control on the slippery roads, to avoid the accidents, the driver needs to concentrate on the roads, however, they should not indulge in the talks or with the phones.

There is the need to turn on the head light in the night, especially in the fog, so the moveable or non-moveable objects could be seen, moreover, in the rain, fog or other bad weather conditions, there is the need to keep distance between the vehicles. There is a need to drive below the speed limit because speed can cause the hydroplane in the rain.

Accidents are there as the drivers do not know that what to do in the bad weather conditions, however, while doping the research, it comes to know that people should notice the weather, and they need to be trained. However, weather conditions can be dangerous, as the research shows that there is different weather in every country, but the main reasons are, the wind, wet weather, fog, ice, snow etc.

In the dangerous conditions, or in the bad weather, the driver needs to focus on the danger of weather and bad weather situation, as the training should be given to them so that they can get safe from the risk or accidents the driver need to drive on the less speed. I the extreme weather, there are the different weather conditions as in the winters months, the driving can be more difficult, during the snow, there are the slippery streets, and the visibility issues, driving in the rain can be more difficult, as the wet roadways are dangerous. Rain is mix with the oil, gas and other fluids of the vehicle. The driving can be more difficult for the night so the drivers need to be prepared.

The drivers are unsafe with the speed operations, with the obscured windshield, the drivers can contribute to the accidents, there could be result deaths, as the people, who are with driver can also face deaths. The unsafe speed can cause the property damage and the there could be injuries. The PFC can be helpful techniques or projects for the drivers, as they could know about the weather conditions.