The increasing incidence of reports of young people presenting in accident and emergency departments as a result of intentionally harming themselves has resulted in a concomitant increase in interest in this problem among clinicians and other healthcare providers (Storey & Hurry, 2005). There has also been a growing recognition that the statistics of self-harming young people from tertiary healthcare facilities only represent a fraction of the true incidence of self-harm in young people today (Storey & Hurry, 2005). Although precise numbers are unavailable, researchers have estimated the annual rates for acts of deliberate self-harm among young people at between 2.4% and 24%, with one survey indicating an annual rate of 6.9% among 15- and 16-year-olds with lifetime prevalence in excess of 13% (Storey & Hurry, 2005). In this proposed study, a triangulation or ‘mixed’ research method will be used as a methodological framework for quantitatively studying prevalence and early detection of adolescent suicide and self-harm.

The term “self-harm” refers to inflicting pain on oneself through cutting or burning to relieve emotional pain or distress (Heath & Toste, 2008). In some cases, self-inflicted injuries involve cutting or burning the body or use of a weapon such as a knife, razor blades or box cutters (Peterson, Freedenthal & Coles, 2013). A failed suicide attempt can be mistaken for an attempt at self-harm and vice versa and this is the source of a great deal of confusion for healthcare professionals working with adolescents (Peterson et al., 2013). One reason that adolescents might be drawn toward self-harm behaviors is the emotional high that they appear to achieve from cutting or burning themselves. There is an almost immediate release of endorphins into the bloodstream and a pleasurable high is experienced that helps to replace the numbness and pain that some young people feel in their lives by providing an emotional release (Straus, 2006). 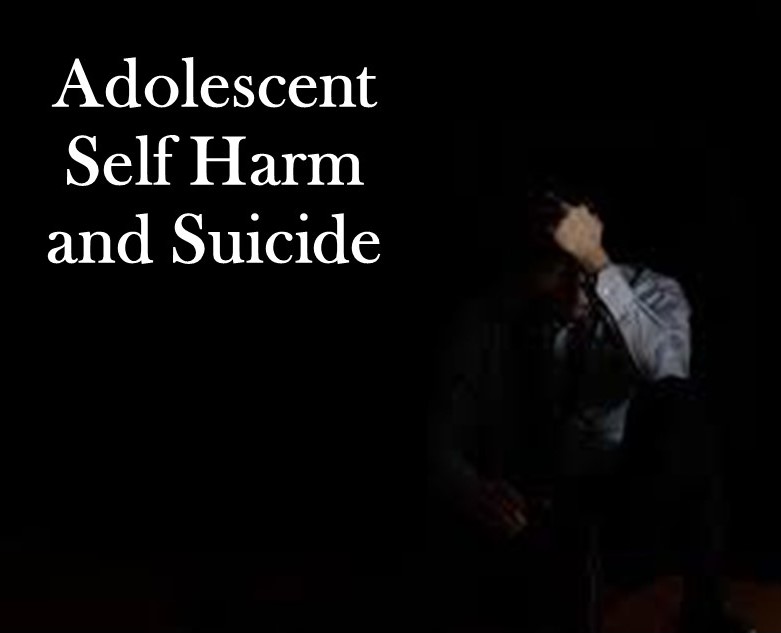 Professionals working with adolescents should be aware of signs that could indicate that a youth is engaging in these behaviors. These can include cuts or burn marks on the body or wearing long sleeve shirts in the summer and being reluctant to have a physical exam. Parents might also provide information that can lead the professional to seek more information such as peer groups that the youth is now associating with or finding items in the home or in the bedroom which could be used for cutting or burning. Such awareness is important because teenage mortality is a public health issue and a majority of these deaths are preventable. Suicide is the third-leading cause of death among adolescents and it is believed that 14 to 24 percent of teenagers have engaged in acts of self-harm. Moreover, someone under the age of 24 years commits suicide every 2 hours in the United States, leaving behind families and communities that are left to wonder why these tragedies occur and what can be done to prevent them in the future.

As noted earlier, triangulation or ‘mixed’ research method will be used in this study as a methodological framework for quantitatively studying prevalence and early detection of adolescent suicide and self-harm. Ideally, the study will be a quantitative research study that intends to use both primary and secondary research methods (triangulation) to accomplish its purpose. As noted by Hawton, Saunders and O’Connor (2012), self-harm and suicide are significant sources of public health problems in our nation’s adolescents with self-harm statistics being high among teenagers and suicide rates being noted as the third most prevalent cause of death among American teenagers (NIH, 2008). The triangulation research design will help us in exploring self-harm and suicide and evaluate how nurses and other professionals can recognize signs of self-harm and interrupt a cycle that might lead to suicide; which is the purpose of this study.  Hussein (2009) noted that triangulation is a concept that is defined as the application of several qualitative and quantitative techniques in studying a common phenomenon for the sole purpose of increasing the credibility and validity of the study.  The primary research will be conducted by means of an online self-administered survey.

In regard to the appropriateness of the approach, researchers have always argued that a good research practice often involves the utilization of multiple methods in order to enhance both the validity and reliability the research findings as indicated in the work of (Mathison, 1988).The choice of triangulation as the appropriate research design is inspired by the fact that helps in achieving improved clarity, research completeness and validity as noted by Fielding and Fielding (1986). According to Knafle and Gallo (1995), triangulation technique contributes to the overall quality of a research ‘only to the extent that it facilitates the achievement of some clearly articulated purpose’ (cited in Adami and Kiger, 2005). The convenience of triangulation in nursing research for confirmatory purposes is noted by Adami and Kiger (2005) to be heavily dependent on the principle that research should be a rigorous search for absolute and objective truth. Validity and completeness of findings on how nurses and other professionals can recognize signs of self-harm and interrupt a cycle that might lead to suicide are therefore our motivation for choosing triangulation technique for this study. The overarching objective of this study is to find ways of minimizing mortality and injury due to teenage self-harm and suicide among the American youths.  This must be done with the highest level of clarity, validity and completeness that can only be achieved by means of triangulation.

Teenage mortality is an important public health issue because the majority of these deaths are preventable. Suicide is the third leading cause of death among adolescents and it is believed that 14 to 24 percent of teenagers have engaged in self-harm (NIH, 2008).  Every two hours in the United States someone under the age of twenty four successfully commits suicide leaving behind a family and a community that is left to wonder why this has happened and also if there were measures that might have been able to prevent the death from happening (ASS, 2013). The purpose of this proposed study is to explore how nurses and other professionals can recognize signs of self-harm and interrupt a cycle that might lead to suicide. Research into how nurses and professionals are coping with this pandemic will be explored.  An important question will be how assessment tools can identify at risk youths. Nurses from many fields work with adolescents; these include those who work in clinics, in hospitals, in schools and in psychiatric units. This proposal intends to provide an outlook on how this pandemic can be mitigated through the involvement of nurses and others who work with adolescents.

Role and Bias of Researcher

The role of the researcher in this study will be to investigate by means of credible sources and latest information, the role of nurse-assisted early detection of adolescent suicide and self-harm in order to interrupt the deadly cycle that leads to suicide. This would be done by the formulation of objective research question and following a research methodology that is accurate, valid and free of any bias.

Bias is defined by Sica (2006) to be a type of systematic error that can ultimately influence scientific investigations and hence distort the overall measurement process. Panucci and Wilkins (2010) noted that the identification and avoidance of bias is the sole responsibility of the researcher. In order to avoid researcher bias, I will ensure that I formulate research questions that are not too leading. As a researcher, I recognize that I will be interviewing nurses who have already had experience with young people who might be prone to self-harm or suicide. It will be necessary to develop a suitable survey to allow for those with different experiences to ensure that the data is without bias. The survey needs to be refined to eliminate bias from those who might have considerable experience with adolescents who have followed through from self-harm, to completion of suicide. A potential bias or error in the survey can be recognized by realizing that individuals with more experience who are interviewed would be more inclined to take adolescents threats more seriously than those with only casual experience who might hear the adolescents concerns but might see them as maneuvers to get attention from parents or school authorities.

A random stratified sample of American Nursing Association (ANA) members will be drawn to ensure mix by state, organization type and number of years in the nursing profession. The only inclusion criterion is that one has to be an active duty registered nurse (RN).

The sampling technique is highly appropriate for the purposes of the proposed study because stratified sampling provides samples that are highly representative of the population of interest .The choice of stratified random sampling for this research is informed by its ability to reduce all forms of human bias in the process of selecting participants to be included in the sample. As a consequence, stratified random sample can provide us with a study sample that is highly representative (Daniel, 2011, p.127). This technique also improves the degree of representation of certain groups within a given population (such as nurses who deal with stresses out teens). This means that it ensures that a given strata is not over-represented. This method reduces the sampling error since population statistics estimates are drawn from a known population. Our sampling will be of nurses and professionals working in the field to see if the appropriate tools are being used to identify those who are at the most risk. This would be a stratified sampling that will include professionals who have previous knowledge of adolescents through their own studies, personal lives and work experiences.

In the case of secondary data, the sources will be derived from peer-reviewed journal articles, books, whitepapers, personal experiences, online and offline articles, newspapers and conference papers.  Only the most relevant and most credible sources will be included in this research. In order to choose the most relevant and credible secondary sources, an elaborate strategy aimed at authenticity, credibility, representativeness and meaning was used as described in the work of Scott (1990). All the sources will be evaluated for currency (must be up to date) (Stein, 2002).

The participants in this study will include active service Registered Nurses (RNs) who are also members of the American Nursing Association (ANA). The online survey will be carried out independently via the American Nursing Association (ANA) website (www.nursingworld.org). Individual Registered Nurses (RNs) who access the site will be informed of the online survey via a bulletin that will seek their participation. The bulleting will contain a hyperlink to the online survey. All potential respondents will be advised that participation in the survey is absolutely voluntary, confidential and anonymous. They will also be given a chance of accepting or denying answering any of the presented questions. The important demographic details that will be collected are age, gender, job title, years of work in the occupation, organization type and state.

The most appropriate hypothesis statement for this proposed study is;

Hypothesis:  If early nurse-assisted recognition of self-harm is used among teenagers, then an interruption of suicide cycle may be achieved which would then reduce suicide rates among teenagers.

Advantages and Disadvantages of Wellness Program