Domestic violence can be either physical – where there is danger of harm to any part of the victim’s body;  psychological and emotional – where the offender abuses the victim verbally or criticizes her in front of others or causes embarrassment, despair, sadness or terror; sexual- where in the victim suffers rape or any other derogatory treatment; economical- the offender tortures the victim by causing financial tensions, not allowing her to spend or asking her penny-to-penny accounts of what is being spent; or social- where the victim is not provided the right to visit friends and family members or to attend social gatherings. Other methods of harassment include blackmailing, following, unwanted mails and phone calls, etc. Children, the elderly and the disabled may also suffer as a result of sheer negligence, such as not properly providing food, shelter and clothing or failing to provide medical assistance in time. Kids may also suffer by just seeing their mother beaten up (Davies, Smith and deBenedictis, 2008).

Nearly 31 per cent of American women report being abused by their partners at some point in their lives, according to the 1998 Commonwealth Fund survey (Common Wealth Fund, 1999). According to the ‘National Violence Against Women’ survey (1995-96), about 25% of women reported sexual domestic violence at some time in their lives. In the year 2001, 85% of the victims of intimate partner violence were women (Bureau of Justice Statistics, 2003). There was no difference in rates as far as social, racial, geographical or ethnic differences are concerned. Also, 50% of men who assaulted their wives also assaulted their children.

Women are mainly targeted in what many sociologists call as “intimate terrorism” where in men control “their women” by means of various coercive control tactics which include physical, mental and sexual violence. These victims may even suffer from economic abuse (CDC, 2006).

There are actually 3 forms of intimate partner violence;

There are various theories for causes of domestic violence:

Role of Power and Control in Domestic Violence

The following tactics are used by the abusers to exert control on the victims (Davies, Smith and deBenedictis, 2008):

There is a common pattern of cycle of violence in all domestic abuse cases. The stages of the cycle are (Davies, Smith and deBenedictis, 2008):

There are 3 main phases of cycle in domestic violence (Mayo clinic, 2006):

Phase-1: This is the stage of tension build-up. The relationship between the abuser and the victim is in tension with lot of blaming, arguing and anger. This phase may last a week, months or years and becomes more and more frequent as the cycle becomes repeated. The victim may be frightened to submission in this phase.

Phase-2: In this stage, the actual act of severe abuse occurs. Hence this is known as the stage of acute explosion. The victim is abused severely and is hurt and scared. The abuser loses self-control. It is mostly after this stage that partners usually seek help.

Phase-3: This is the ‘Honeymoon’ stage. The batterer tries to compromise with the victim and apologize and do all sort of gimmicks to restore the relation. He may give a picture that he has changed for good and will never behave in that way again. As the number of cycles increase, this phase becomes shorter. 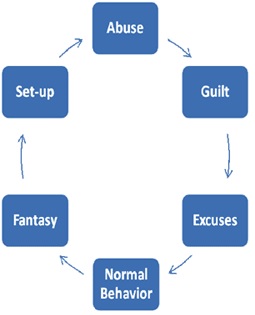 What is typical of the domestic violence cycle is that, each time the violence occurs, the cycle shortens and violence worsens. As the violence gets worse, there may be no time to even acknowledge it! Hence it is pivotal to take action as soon as possible. Without help, the violence will only continue. The best way to break the cycle is to leave the relationship (Mayo clinic, 2006). There are a number of private and government organizations which reach out to the victims of domestic violence. The organizations provide help in the form of shelters, medical help, legal services and 24 hour hot telephone line.

Domestic violence is a major social problem. Though most of the times women are targets of male abuse, many studies have also shown that men can also be victims of abuse. There are many theories which have been put forward to ascertain the cause of abusive nature in the abuser. Although, in many situations, the victim thinks that she is the cause for the violence. Domestic abuse occurs in cycles. As the number of cycles increase, the phases in the cycle become shorter. Understanding of the phases of domestic violence helps the victim to reach out for help in the right time. There are many organizations dedicated to the rescue and help of victims of domestic abuse and professionals dealing with the victims must encourage them to seek help from these organizations.

Lovely Web-site, Carry on the wonderful job. With thanks!