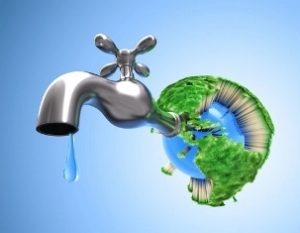 scarcity in agriculture and other fields. The paper focuses on how collaboration between various world governments, especially in the sphere of the United Nations, and numerous Non-governmental Organizations (NGOs) can help in the dilemma of water scarcity in the 21st century. It also focuses on ways of managing water resources in the integrated methods to efficiently cope with the challenges that are posed by water scarcity and on the same case, fulfill the aim of sustainable development. Therefore, the report explores the vision of a sustainable water future where human aspirations are satisfied equitably, without compromising the capability of natural systems to continue providing the water services, which is an essential service for life.

Most countries all over the globe have recently embraced the long-term partnership with the United Nations as well as other nations, which has already agreed to finance a modular programme on coping with water scarcity. Water Scarcity is known to occur when the demand for fresh water typically exceeds the available supply in a specified domain. The condition arises as a result of the increased rate of aggregate demand from all the sectors that are using water compared to the available supply, under the arrangements of the current institution as well as the infrastructural conditions. Therefore, it is manifested by less or partial satisfaction of the expressed water demand, the disputes between the water users, the economic competition for the quality and quantity of water, irreversible depletion of the groundwater, as well as the diverse effects on the surrounding environment (Wolf, 2007).

Furthermore, water scarcity is both a dynamic and relative concept. Therefore, it is possible for this situation to occur at any demand or supply level. However, it is also a social construct, that is, its consequences are all associated with the interference of human with the water cycle. Water scarcity typically varies over time because of the natural hydrological variability, but it is known to differ by a wide gap as the function of the prevailing economic policy, management, and planning approaches. The overall water scarcity may be expected to intensify with the most forms of economic development. However, on the other hand, if water is correctly identified, most of its results may be predicted, mitigated and avoided (In Pattberg,  & In Zelli, 2015).

Factors Behind Water Scarcity And The Role of Agriculture

Water use that is not constrained has developed at the global level to a rate that is more than twice the rate of increasing population in the 21st century. This has gone to a point where reliable water services may no longer be delivered in many regions. The pressure in the population increase, the rate at which economic is developing, pollution and the urbanization are all placing the unprecedented burden on the renewable sources, but in the finite resource, primarily in the arid and semi-arid regions. Overall the economic sectors in the world, the agricultural industry is one of the most affected by the excellent water scarcity. In fact, agrarian accounts for approximately 70% of the world freshwater withdrawals, and of course, more than 90% of its consumptive use (Stoltman, Sage Publications., & Sage eReference (Online service). 2012). Therefore, under the joint pressure that is created by the growth of population and also the changes in the dietary habits of many people, the consumption of food is increasing in most regions all over the globe. This is expected and predicted that by the year 2050, an additional billion tonne of cereals and approximately 200 Million Tonnes of meat would need to be provided in every year to satisfy the demand for food.

The climatic change is another force that is behind the water scarcity all over the world. The difference in climate has induced the glacier shrinkage, which decreases the availability of the glacial water. Glacial water is a fundamental property of the underground water resources. Therefore, the attempt of reducing this water threatens the underground water resources with the salination, primarily because of the sea level rises. On the other hand, reduction in the level of underground water endangers the forest, which stores vast qualities of water, mainly via the increased wild-fires (Corcoran, United Nations Environment Programme., & GRID–Arendal. 2010).

According to research conducted on the extent of water scarcity, fresh water is integral to all the ecological as well as the societal activities, such as the production of energy and food, waste disposal, transportation, human health, and also, the industrial development. However, freshwater resources are irregularly and unevenly distributed, and the parts of the globe are experiencing extremely short supply of water. Therefore, as people proceed with the century, the water and water-supply systems are increasingly likely to be both the objectives of military actions and the instruments of political conflicts, primarily as the human population develops. Also, it will be the objective to the living standards improve, and the global climatic changes make water supply and demand more problematic and of course, uncertain (Pugwash Conference on Science and World Affairs, & Rotblat, 2001).

The options to cope up with the increase in the scarcity of water can be divided into two sections, that is, demand management and the supply enhancement. The option of water supply enhancement involves the increased access to the conventional water resources, the inter-basin transfer, water pollution control, desalination, and also the recycle or re-use of drainage water and wastewater. On the other hand, the demand management can be defined as a set of various actions that control and regulate the demand for water. This can be by either increasing the overall economic efficiency of its use, mainly as natural resources or by running or operating some intra- and inter-sectoral reallocation of water resources. However, the options that look forward in coping with the scarcity of water in agriculture can be explained as a continuum from the water sources to the end user (Wichlens, 2004).

The recent drought and other water scarcity have mad the United States, John Linder R-Ga, to introduce the legislation that would develop a national commission on the water scarcity and resources. In fact, the Georgia Congressman argues that the H.R. 135, which was introduced back in  2007, is not based on any attempt to tap into other states’ reserves. However, it was an attempt to bring together the entire knowledge and expertise from across the nation, which could address the problem of increased water shortage. According to Linder, he was sure that the national commission would facilitate the collaboration between the States and also encourage innovations in the storage strategies. Similarly, the Secure Water Act was another way in which the Federal Government played a significant role in addressing the water scarcity in the nation. The Act discussed the potential effects of climate changes on the national supplies of water, improvement in the groundwater controlling capabilities and efforts, and also provided grants and funds toward the implementation of water conservation (CEPAL, 2008).

The UN-Water can be defined as a mechanism or technique that is coordinating the actions of the United Nations system. It is objected to the implementation of the agenda set by the Millennium Declaration and of course, the World Summit on Sustainable Development (WSSD) in the aspects that were associated with freshwater. Also, the UN-water has developed out of many years of extensive collaboration plus the partnership among the United Nations Agencies (Wester, Scott, & Burton 2005). The entire efforts have assisted in achieving the progress and bring water as well as water-related problems to the top of the political agendas. The several United Nation Agencies, who are dealing with water scarcity reflects the roles played by water in the societies and the compound or complicated concepts it implies. Therefore, advancing in the implementation of sustainable management of water, mainly for the benefit of all, is a collective responsibility. This calls for the coordinated actions with the United Nation systems and of course, with the other partners and stakeholders such as the organizations from the private and public sectors, labor, and civil society, as part of the comprehensive global effort (Young, et al. 2006).

Finally, once admitted that a sustainable source of water is possible in future and that there are some means as well as technologies that enable taking the benefits of the existing opportunities, it is crucial to establish the individual plus the collective capacities and the financial strategies required. These are essential for the integration of water management to make sure that the rational use of water at regional, local and world levels. The institutional development within various frameworks of the NGOs aims at offering the financial stability and the self-sufficiency for the management and development of water resources. Also, instead of being a technical issue, the water policy financial aspect is supposed to be rooted in shared and robust principles regarding the responsibility of any organization or individual who can make generous contributions to cover all the costs of water services and also, to prevent the pollution generated.