For quite an extensive period Indonesia, Korea, Malaysia and Thailand had a stable growth and their economic data 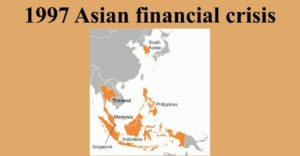 such as inflation, fiscal position, and increase in exports showed solid perspectives to the foreign investors.  Consequently, it would be accurate to state that not many economic agents anticipated the financial Asian crisis to occur.

Moreover, it is relevant to understand what the causes of the Asian economic currency and financial crises of 1997-1998 were? To address this question, we will have to acknowledge two main factors that were taking place prior the crises. These were a lack of transparency, which made the investors and economical agents assume an Asian financial stability, and mislead structural and economic policies, which did not attempt to solve deficits in the balance of payments and debt tribulations.

The following will rely on four main proposals of what should have been done by the policy makers in each stage of the financial crisis. The four proposals are: tax for outflow of short-term capital, a fixed spread for the financial institutions that will apply only in the short term, a dirty exchange rate that will apply only the short term as well and an improvement of financial transparency.

The Asian financial crisis took place in 1997, which had an evolution that started mainly in the 90’s in countries such as South Korea, Thailand, Indonesia and Malaysia. These countries experienced a rapid international debt boost, due to shorter payments dead line. Thus, the international debt of North Korea, for instance, increased from 31.699 million dollars in 1990 to 164.345 million at the end of 1996.  Thailand increased from 28.088 million dollar debt to 90.622 million in the same period. The short-debt represented 31% of the total debt in 1990 for South Korea, yet in 1996 it represented 67% (world bank report). Most parts of this debt was involved in the private sector.

Without a doubt, this short-term debt represented one of the main reasons, which led to the financial crisis to occur. Furthermore, it would be precise to say that Lawrence, Lincoln, Furman and Stiglitz agree that this factor was one of the main causes of the crises.

This high short-term debt occurred because the Asian private entities offered a high short-term interest rate, which made the investor locate their capital in those institutions, due to the high return of investment. The second reason was that the exchange rate responded to a fixed system, meaning that the investors would not lose any funds in the conversion of one currency to another, as they withdraw their funds and take them back to their own country. This situation made the banks experience a deficit balance, which reflected high payouts to the investors and not enough assets to make the accounts balance. In addition, the stabilization agencies were not aware of the financial condition of the banks, which enable them to decrease the magnitude of the crisis.

Therefore, it seems clear that the financial system needed resources, which could provide them some oxygen until they could achieve to equalize their liabilities and assets. It also seems clear that the Asian banks needed a longer period to reimburse their liabilities. Yet, in order to achieve this task, the first approach that comes to mind is an increased in interest rates for long-term investments and a decrease in interest rates for short–term.        Nevertheless, this strategy was already applied, but it did not bring the results that were expected. The explanation of this fact is that once the interest rates change, another factors such as exchange rate, money supply, and exports change as well. Additionally, several factors such as the Central Bank, the government and the market determine the interest rates, which makes the transition from a lower interest rates to a higher interest rates complicated because these entities would have to agree with each other.

Moreover, if the interest rates go up the market will suspect a weakening in the financial system. According to Furman and Stiglitz an increase in the interest rates represents “a signal of lack of confidence”. The consequences of this mechanism (an increase in interest rates) could be even more striking than staying with the same interest rates, because the investors would not be willing to deposit funds in an institution that might not be capable to make give them back. At the same time, some investors might be prepared to withdraw the deposits that are already in the Asians accounts. Once this situation occurs the Asian financial entities would not even have shot-term capital. Because of these reasons, the International Monetary Fund proposal to increase the interest rates violates the first rule of medicine: Do not harm the patient.

A possible solution to this matter could have been a tax creation for short-term capital outflow. This way the investors could have been attracted to invest in long-term and the market would not have been affected (the interest rates stayed the same). Another advantage of this approach is that, it could have been easy to apply, since the government has the complete faculty to create taxes.

However, this strategy would have been difficult to control, because money does not have to pass customs. Furthermore, the investor does not even have to see the money; he or she could change accounts electronically.  That is one of the reasons, why the creation of a regulation entity is very important. It would analyze the accounting and financial situation of every Asian bank in each country and exposed that information constantly. Let us remember that one of the major reasons for the crisis was the lack of transparency. In addition, this regulation entity should have complete autonomy from the rest of the government; this way this entity would provide reports and analyses, which would not be influence by any political tendency and interest.

On the other hand, we have to acknowledge the fact there are two interest rates, with which a bank does a business. It is not enough for a Bank to have solvency (from investment) it also needs creditors to give that solvency. Without creditors the banks would be in bankrupt sooner or later. In the Asian case, several Asians individuals were borrowing capital abroad, due to the higher interest rate. This situation represents another problem to the Asian financial system. In spite, of the fact (with new tax policy) that the capital will stay in Asia for a longer period. We can be positive about this argument, because the Banks will still have to respond to their lenders sooner or later. Additionally, the government could not impose taxes on borrows even if they are made in foreign countries (Asia needs to wake up the economy).

Once again we find ourselves in the same dilemma, how could we promote the domestic investor to stay in the domestic financial system? We have seen that an increase in the interest rate would cause repercussions in other economical readings, which would lead to a vicious cycle. Applying a monetary policy through the interest rate, involves numerous actors and policy makers, which probably would not agree with each other in several aspects.

A convenient mechanism could be that the government would set a mandatory low spread for the banks. In other words, the banks would be obligated to reduce their profits due to the difference between lending and borrowing interest rates. For instance, two or three percentage. This method would encourage local individuals to search for domestic funds, and at the same time the interest rates would fluctuate according to the market. We also have to admit that this mechanism goes against the golden rules of market economy, which is fixing the prices. However, this mechanism would apply for a short period until the economy activates again.

Additionally, the citizen will abandon the local currency due to the lack of credibility in their governments, as a result the currency will depreciate. Thus, the debtors could no longer pay their creditors, because they borrowed foreign currency from offshore institutions (less interest rates) while their income in local currency was not rising at the same level. Additionally, this country will experience inflation. A logical solution to this problem could be to borrow capital from foreign institutions to maintain a fixed currency (the central banks did not have enough reserves to do so).

However, Asian countries were facing another immense problem, a reduction in their exports, which made the crisis even worst.  Exports are the engine of growth in many Asian countries, because they represent an important part of their economy. For instance, in South Korea and Thailand exports are 40% of the GDP.  Needless to say, if the exports decrease the economies find themselves in serious budgets difficulties. Besides, the exporters are left without funds to pay their debts. Why did the exports have decreased? The main reason is that the exchange rate was fixed to the value of the dollar, but once the dollar started to appreciate the Asian countries started to lose competitiveness.

The trade theory tells us that a deficit in the current account could be solved with a depreciation of the currency. This technique would improve the countries competitiveness by making the exports products cheaper.

In order to depreciate the currency, the Central Bank would have to let the exchange rate float (they run out of reserves), as an effect the citizens will abandon the local currency making the currency depreciate.  However, this method in Asian countries would bring the negative consequences that we mentioned before.

Consequently, we will have to measure if the benefits exceed the negative outcomes. But, according to other countries experience, such as the Latin Americans, the inflation was so brutal that the exports could not compensate it. It is also my belief that the Asian countries were on the same path.

Because of this reason, the Asian countries should have depreciated the currency to increase the exports until the benefits would be more numerous than the disadvantages of inflation and debt payments difficulties. Sequentially the Asian countries will to maintain the exchange rate fixed until a limit, where the negative consequences will discourage the economy. At this point the role of the IMF has great relevance, because it could lend dollars to the Asian countries, which had a great reduction in their reserves, to sustain this dirty float. Of course this strategy would only apply in the short term until the Asian governments would gain its credibility back.  This proposal would have applied for a period, in which the Asian governments would have gained the trust and credibility of the Asians citizens and international investors. Once these goals are achieved, the golden rules of the market would be established again.

As it was mentioned before, the Asian financial market showed a lack of transparency, for example it has long been known that financial intermediaries whose liabilities are guaranteed by the government pose a serious problem of moral hazard. For instance, the U.S savings and loan debacle is the classic example: because depositors in thrifts were guaranteed by the FSLIC, they had no incentive to police the lending of institutions in which they placed their money; “since the owners of thrifts did need to put much of their own money at risk, they had every incentive to play a game of heads I win, tails the taxpayers loses” (Paul Krugman)

Finally, institutions such as the IMF and prestigious economists do not seem to coincide on several politics, which the Asian states should have applied. Yet, the only argument on which they agree is the fact that Asian countries needed transparency, truthful entities and credibility. Therefore, if nations do not want to go through a crisis of this magnitude they will be obligated to involve these concepts in every day transactions.