In Japanese, the word ’emoji’ means ‘picture letter”, it is a pictorial symbol that represents a concept or a feeling in electronic communication. Emotions and icons are merged to form emoticons in various genres that include places, gestures, places, facial expressions, animals etc. The functional verbal icons show intonation, stress or tone while nonverbal are dress, body language or expression of face. These tools are commonly used for communication in a virtual world like instant messaging, blog or forum (Emojis, 2020). Communication patterns are continuously changing due to change in lifestyle and social trends.

Technology has a significant impact on language, attitudes and social behaviour. Language has different forms, needs and tools that are helpful for its users to communicate (Language, 2016). Mobile devices are easy for communication, and for the linguistic community, there are vital communication cues. There are different arguments about the use of emoticons and emojis in communication, no matter they provide clarity and nuance to the messages (Kirley & McMahon, 2019). Millennials are the frequent users of mobile devices, so a new emoji language is developed for the tech-savvy generation. It is also considered that emojis are developed from traditional expressions of the face; these are clear parallels to the pictorial languages. 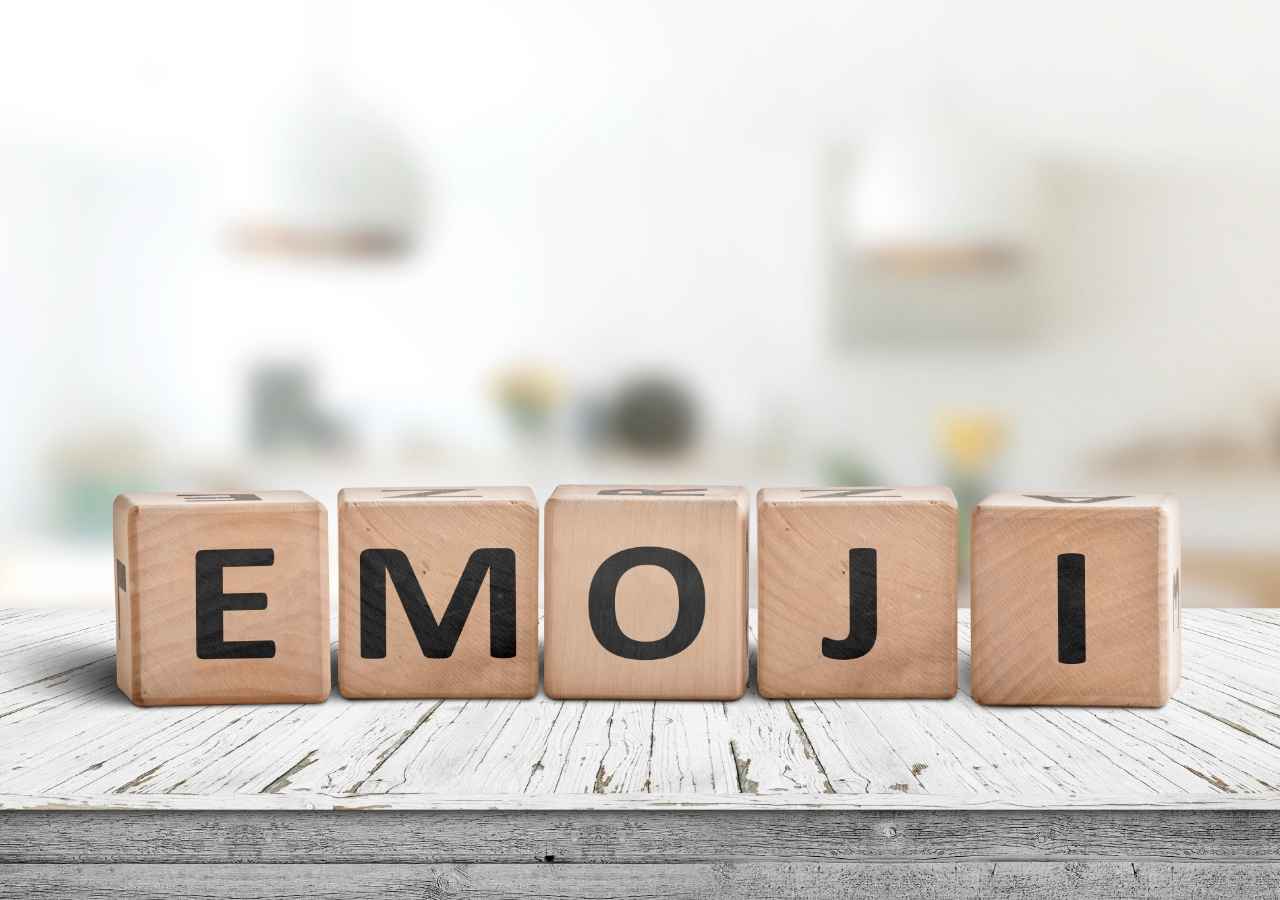 The paper will focus on how the historical or social significance of emoji for online communication has been challenged by representational politics or image governance online?

In online communication, emoticons are the digital symbols that ease communication. These were precursors of emojis when devices were unable to develop colourful images of graphics. Emoticons are developed into emojis due to technological advancement. The social media platforms are based on a content-rich interface with a graphical element that is used for the interactional context (Kirley & McMahon, 2019). In 1982, Professor E. Fahlman of Carnegie Mellon University used to dash, colon and parenthesis into 🙂 turned a smiley face to add humor in the bulletin boards. It was slowly spread to listservs, mailing lists and discussion boards. This typographic smiley was developed into characters combinations and then entered into the internet literacy imaginary as emoticons (Language, 2016).

Another example is the design by Japanese Shigetaka Kurita in a company that developed pictograms by i-mode mobile service. Kurita after ten years designed 176 emojis as a foundational artefact in the telecommunication. The emoticons were a significant component of the computer-mediated communication throughout the 1990s. In 2010, Unicode standard included emoji, and then it appeared for internet messaging, smartphone applications and software. At digital media platforms, the additional functions for text communications added visual components, such as theme-based stickers, animated cons and GIFs.

Research indicated that variegated genres by media platforms, stickers have shown innovations, and it is appreciated at the social level. The visual components for online communication is a central concern for society and representative politics. Studies show a discourse analysis of emojis, with changed skin tones (Emojis, 2020). White users focus on ideological disruption by making the interface of racial identity. Such a shift is not neutral but created anxiety in the community because white skin toned emoji is a racial identity. Recognition of race is self-expression that poses challenges to identity politics. Nonwhite and white skin tone modifiers in online communication are a concern for different social media platforms (Language, 2016).

There are racial and technological realities and work on the basis of skin-toned emojis because (Sow and Friedman) authors experienced white privilege and systematic racism. The authors explain white identity through modifiers that unease explicitly claiming entities. White users are also encouraged in this way to use technology to constrain racial identity and an extension of self (Li & Yang, 2018). The use of yellow emoji is an alternative to realistic skin tone emojis. A yellow emoji is an option for race less white users because it only needs to express the emotions. The yellow emoji presents the idea of primacy, and the default setting of yellow emoji is neutral unless the user sets other skin tone options.

Depending on the spoken language, emojis are the physical and emotional cues. They give high visual way to writers and express feeling in a fun way. Natural language is rarely accompanied by physical gestures, so emotional context is added through emojis (reactions, 2020). They help writers convey thoughts and feelings so humans can easily communicate. Egyptian hieroglyph system was controlled by Pharaohs, and they used visual symbols. Thus a diverse pattern exists in social status. Studies show that in western countries, 40% of all the text is composed of one emoji. Similarly, in Korea, written communication uses one-third of these symbols. Socially, emojis are added features in online communication, and their usage and significance are uncontrolled.

Regarding image governance online, racism is frequently discussed. In this context, emojis with racial impact and skin tone highlights racial discourse. Image governance online in communication is seen on Facebook and Twitter, thus relates to vernaculars like stickers, emoticons and Japanese Kaomoji. These are crucial elements considered by the rule of law, politics and society. Australia’s foreign minister described the Russian prime minister with pouting face thus gave rise to an odd diplomatic incident (Emojis, 2020). Another example in Australia shows that Unilever owned firm threatened its employees by posting an angry emoji for the expression of outrage against the plan of the company to cut their wages. The angry emoji can be taken into account in a trial when judges receive such evidence in the form of digital images.

The social concerns regarding emojis act as a challenge for image governance online in communication. Use of emojis in the form of representation matter most because they are weighted to the benign common image or trigger discrimination. The other functions of emojis are lexical, prosodic and effective, yet they have material politics (Kirley & McMahon, 2019). The emojis are also used for the pathetic purpose to keep the communication friendly. For instance, feelings are reinforced, so little images of emojis express illocutionary force. They also can signify threat, sarcasm or playfulness. Therefore the social significance of emojis in online communication is challenged by image governance online.

According to a political science scholar, the anger is built into politics due to the activities of political parties. It is to attract and retain the support for workers, so anger mobilization to citizen’s sentiments can be constructed as an enemy for politics (Li & Yang, 2018). On social media, the privilege of emotional responses to political debates and issues using anger faced emoji is challenging and a matter of social concern. It is also a practice of intergroup antagonism (reactions, 2020). Facebook reactions and its interpretation about how people use emojis indicate that people want to express.

Any form of reaction that shows encouragement provokes the sharability of the post. The architecture of social media platforms is based on encouragement and expressions to certain content (Kirley & McMahon, 2019). Facebook develops categories on the basis of user behaviour to the target audience. According to a study, during the 2016 presidential campaign, micro-targeted ads were used to influence the vote. Facebook reactions enable the audience to explore the facts and to respond using emojis. Another example is Vlaams Belang that was created in 2004, and it outlawed racism. It was the political party that positioned itself for disaffected white working people, so it maintained an Islamophobic stance. In Belgium, since 1981, ethnic, racial, and national descent is outlawed, and racial hatred is illegal (Emojis, 2020).

Emoji is always found to have pragmatic functions. More specifically, it has illocutionary force, face-saving strategies and politeness strategies. The emojis indicate emotions accurately and support expressions. They also clarify messages in online communication, so have strong social significance. Research studies have reported that hostile verbal messages present a different meaning with emoticons than those without it. The emotion modifier can be neutral, positive, and negative. This task-oriented communication is evidenced to have a positive impact on simple communication. The social significance of emojis in online communication is clear, yet this has been challenged by representative politics, as seen from political and racial aspects. The pragmatic functions of emojis are to display naked emoticons and enhance verbal communication. However, the scope of classification on emoji terms are hedging devices, modesty devices, rapport building, and to convey emotions.

The emojis are evolved over time due to technological improvement, so they signal a positive attitude to identify the expression. They also communicate at a high-intensity level that is verbally coded, and it strengthens the illocutionary force of speech. As it is said, a picture is worth a thousand words; the emoji can save time, typing characters and digital communication is ease. The use of emojis on different platforms with different languages shows its importance and how it is inbuilt in different cultures, despite social concerns and political dilemmas that always arises due to controversies. It is evident that this importance cannot be ignored; rather, it is developed into more beneficial terms to facilitate community.

Pros and Cons of Single-Payer and Employer-Based Insurance Systems