Advantages of Emojis in Social Media

Emojis are proved an ideal way that engages the users of social media. The brands are getting advantages by introducing creative emoji for their product marketing. The use of emoji is an effective way for the nonverbal communication between different users. In the brand marketing, it provides a way to get more customer retention. In the live chat, the users communicate their emotions through social media and use of emotions generates personalized communication and reduces negative and regretting responses. Emoji are providing shape to the world of social media. In the social media, emoji represents emotions as well as the leap in the cultural and technological aspects. Emoji are becoming trending and have the vital role in the digital marketing, the higher benefits are in sending the push notifications and the open rate is improving to support the push engage. The researchers demonstrated that the use of emoji in the communication makes the communication irresistible because the human brain identifies the emoji as different but nonverbal communication.

The power of changing the mood of the viewer provides the tone of voice about the expression even for the facial expression. The limited conversation of people in real life is increased via the internet due to use of cheering and enjoyable colors of emoji. Sometimes the use of emoji recalls and reminds old memories and changes facial expression. A single click on the happy emoji brings multiplied warmth to the reader and he feels good for having a conversation between the users of social media. The use of emoji on social media increases happiness and emoji enables to trigger happiness for all the human minds. The deeper insight of different benefits can be listed as the powerful rate of positive conversation increases between the users and viewers, boosts the retention, increases open rate, and the most important factor is that it requires only minimal efforts to spread happiness in a person’s circle. A research conducted by App Annie and Lean Plum determined the pros of using the emoji at the higher side of advantages in the social media.

The open rate of push notifications increased to 4.51% when using the emoji, on the other hand, the open rate was measured as 2.44% without using the emoji. The standing fact was sustainable for the emoji that it increases the use of emoji and the study conducted for the analysis for the whopping that reached 85% by using the emoji in the conversation. In the study, the analysis was conducted for the 5000 push notifications and the camping determined that each individual push message was 2.6 and the increase in the push notification was for 163% for the recent year of 2016 as compared to the previous year. The retention rate increased for the use of emoji in the notification for 20% while the increase in the push messages was 7 times more. The increase in the retention rate was 28% when emoji were first introduced by mobile services. The push messaging strategy was improved by optimization of emoji power. 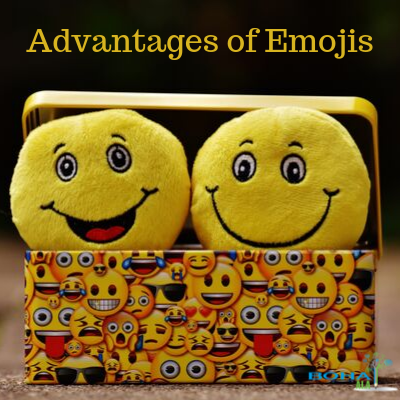 Multiple numbers of companies introduced their personal logos and emoji to represent the product in the market. Domino’s Pizza, an American company started use of emoji and take advantage of customer attention through attractive and creative emoji. Domino’s started getting information and invited the audience to get online pizza service by sending innovative emoji such as the slice of pizza. The demand of orders increased four times as compared to the previous regular orders. The innovative idea was named with the new phrase “Easy Order”.

The most admitted platform for the use of emoji is Facebook ads. In the storage capacity, certain types of emoji are often updated for the users. The use of new types of emoji increases advertising process for the emoji. From a single search on google for the best emoji advertisement shows queue of different brands who used emoji for their marketing campaign. The analysis showed that better and regular use of emoji that considered copy filled with different types of plain text. Based on the statistical analysis, the increasing number of consumers are women that constitute 85% of the total consumers and 56% of the users on the social media are known as heavy emoji. The example for the emoji use is dove generated on the curly hair, taco bell that was created on the taco emoji and got thousands of the supporters were for the use of emoji. The only consideration is the effective push notifications and the copy writing for the demanding of content. The use of emoji in the online advertisement adds a tornado of freshness.

Emoji was first represented by the communication company of Japan NNT DoCoMo to increase the number of users from the whole world. The users considered emoji as the supportive method for the basic characters of text. The research conducted by Dr. Owen Churches investigated the diversity of emotions and impact of emoji on the decisive culture. The research concluded the attraction of the human brain to the emoji in a similar way to the expression of the human face. The expanded research confirmed learning and recognizing process for the neurological cultural response. The emotions and emoji can amplify the message, for instance, the mad emotions deliver a hostile message and the emoji of a happy emoticon transmits multiplied emoticon. In the business, the use of emoji delight and entertain customers. Emoji induces immediate effect and represent more than a thousand words even in a single glance. The increase in customer engagement can be described by explaining the process, for instance, if someone sends a text message of “Hi” to someone unknown there will be less chance for getting back the response while on the other hand, the addition of emoji to text increases the chance of getting more responses.

The process of getting more information from a service is by using the emoji and innovative concept. During 2016, the marketers of emoji boosted the customer engagement and the rate of increase was measured as 108%. The increase was observed due to an increase in the types of emoji, for instance, he added the rainbow flag, gender options, David Bowie tribute, and representation of family members by using emoji. Emoji made their own place in the social media as well as in the English dictionary as during 2015 the Joy emoji was named as “The 2015 word of the year”. The vital role can be observed on the individual basis and each person uses emoji to report the social activities. The statistical reports were gathered by platforms of social media such as Facebook, Twitter, and Instagram. The outperform images of emoji can be 9%, the realizing facts for the users of the internet was sending messaging, plain text, and visuals. There is no doubt, according to research that use of emoji boosts the customer engagement. Instead of text, the visual messages are getting more attention. Pushing the notification and then holding back increases the engagement of customer with the services. The use of the right emoji for the target audience helps in connecting the users at emotional levels.

Emoji are not only used to represent the emotions but as provides different types of situations, places, humans, and objects for instance extraterrestrials, weather conditions, plates of spaghetti, hospitals, relations, and families with children. It is very simple that when the users become dependent or get bound with the imaginary aspects they need something that can effectively explain their feeling and expressions without the use of words. The primary reason behind the fact is because the alphabetic language requires a lot of struggle to adopt the expression of emotion. So that something better then the word is always needed and there is a lot of space for the new methods to express the feelings and emotions regarding any particular point. The gap that was developed previously between the alphabetic language and imagery expression is filled by the emoji. All around the world humans are a multitask-er and they like to use new methods to express their feelings and emotions in any situation. The emoji are the best way to define states of mood and variation in the situations specifically it can define the nature of the behavior of customer and users.

The research conducted during March 2016 described that use of emoji increased 77% social media campaigns just in one year. In the social media marketing emoji can generate great allies. The use of images instead of saying words communicates a lot and makes sense. The specialized media campaign of Ford increased by 25 thousand downloads for the image, 40 thousand shares, and 1 million impressions by using the brand-defining image.

In the digital marketing, the positive emotions achieve more marketing and transmit the message to the increase brand awareness. On 4th July, Bud Light an American Brand decided to celebrate the independence day of the United States with new and innovative style so they introduced three emoji including the flag of united states. The strategy got huge repercussion from the social media and Twitter. The tweet was retweeted 140 thousand times. The method of promotion and marketing then achieved successful idea as a classic tradition. The use of emoji adds expressive power to the story and have the serious impact on the listener (Skaf, 2018).

Emoji promotes conversation by adding the love characters in the saga games and conversation between the people.  While using Twitter the use of hashtag converts the text into relevant emoji. The best example is star war campaign as it attained highest global number for engaging maximum people with the services. By using star war campaign people tell their fun stories by their favorite characters. The social network is optimizing the use of emoji in the social media. Twitter, a well-known social media, just provides 140 characters for their users to express what is in one’s mind for the follower. Utilizing emoticon’s in the tweets gives the better opportunity to the user to use more characters. For instance, typing the word pizza contains 5 characters from the alphabet. On the other hand, the pizza cut emoticon and it just considers one. When posting a review or a comment on Instagram, use of emoji provides a chance to post more characters without compelling your gathering of people to tap the “more” connection to peruse the whole subtitle. Another incredible case of how the emoticon uses can be valuable is while sending or sharing any kind of pictures and recordings with Snapchat and Instagram. Certainly, no one would prefer to cover the photo or video up with excessively numerous words, so for what reason not locate an innovative method to use emoji. With any new correspondence such as discussion on any type of topic or new interpersonal network, there should be some experimentation to find the effect of emoji on the customers and on the marketing of the services. A few things will work while others may get the failure in getting success.

In any case, we don’t believe emoticons can be totally disregarded if the business is delivering various messages, tweets, notices, or Snaps to clients. The emoji are simple and a soft way to express the feeling. It is the best way for a comprehensive communication the targeted person understands it more quickly as compared to the words by using the emoji’s in conversation the user doesn’t have to type the whole message with the use of emoji’s the user saves the time and effort and it more effectively on the targeted person. Nowadays emojis are replacing the words. In comparison now users perform the emoji’s to express the situation as compared to the words. The words are free from the emotions and lifeless that is the cause behind the creation of emojis.

Impact of Emoji or Emoticons on Students and Teachers Research Paper