The plans are always based on the objectives, irrespective of how one tries to accomplish the objectives, just like when we speak about “Strategic Planning”, it implies using methods that would enable us to implement our plans. Strategy is the best way for a business to make use of several alternatives available to achieve the objective, Strategic planning has many advantages in a business since the blind can not move properly without sticking, just as the business can not move without strategic planning.

The fundamental aim of strategic planning is to move the organisation or company in a manner that is viable for every company or organisation, it includes minimizing the chances of loss, and maximizing the chances of profitability in the long run, it means that its another purpose is to secure the position of the firm or organization after a period that is usually longer than one year. Another purpose is that it doesn’t allow the firm to get distracted by the prevailing conditions whether good or bad, it is a job of Manager who has done strategic planning of the firm to ensure that all the necessary activities are carried out in a planned way so that no obstruction occurs. 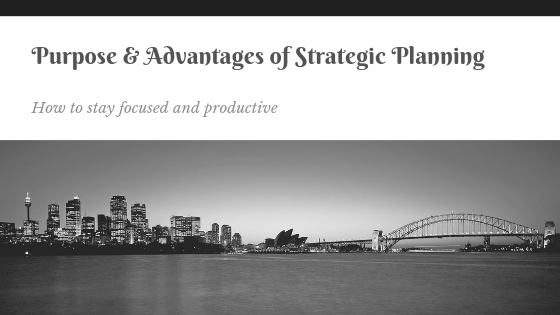 There are countless advantages of strategic planning which, according to Sadler in 2004, would have been assessed previously by studying its aims:

“In business strategy involves forming a path for the organization to follow that will lead to products or services that customer will want. This will usually mean some kind of new departure for the business, requiring the leader to implement various tactics or sub-strategies. These tactics are usually set out in the component parts of the business plan”.

The strategic planning process consists of two phases, the first one is strategy formulation stage, and the second one is strategy implementation stage, in the first phase we have to identify mission and strategic goals of business, of course when someone wouldn’t know where someone is going, how could someone will get courage of moving forward, the second thing we have to care about is conducting competitive analysis, here we have to analyze the company’s strengths, weaknesses, opportunities and threats (SWOT Analysis), than the last part of first phase appears in which there is a need of developing specific strategies, the three of them are corporate, business and functional levels of strategies. In the corporate level of strategy, which tells about what businesses the organization will operate and how resources would be allocated, the second one is business level strategy that tries to define the best means of competing within a business, it also supports the corporate level strategy, the third one is the functional level strategy which focuses on the specific action plans for managing a specific functional area within a business, it supports the business level strategy.

The second phase of planning process is strategy implementation stage in which all that is planned previously is implemented on actual situations, it means exactly to evaluate the plans and control afterwards where required.

As mentioned earlier, the Strategic Planning is a long term planning, it consists of time that is longer than one year, more formally such planning is done while considering all the past records and resources that the company or organization has, the strategic planning is basically coping with the company’s “strategy Formulation” stage in which the company has more concerns on its mission and goal statement, its SWOT analysis and other specific strategies, by keeping in view all these parts of the first phase, the strategic planning is done, which means that it is in accordance to those conditions, so at times strategic plans can be changed by changing only small parts of formulation stage, such as mission statement, the entire planning can be failed by doing so, that’s why it is very disrespecting to the company to even make small changes in its mission statement.

The external environment is more formally known as the opportunities and threats, it is called so because both of these are affecting the firm or an organization externally, it not only includes the external affect but there are certain actions that are more concerning here, an organization or firm has to monitor the both macro environmental and micro environmental forces in order to control effectively. The Macroenvironmental forces include demographic-economic, which means that an industry is definitely influenced by the population and the buying power of the consumer, than come technological influence which means the changing trends or tastes in the society perhaps due to change in the world because of technology improvement, than comes political-legal constraints, which means the influence of the government formed laws and regulations, than the last of it is social-cultural influence which means the usual practices of the society, that may be irrelevant to what the organization is manufacturing or providing. The next one is Microenvironmental forces that include customers, that of course are the biggest reason to the firm’s profit, if customer would change behavior than the product or service may become useless, the next influence is of competitors due to which the organizations need to be more competitive, according to Michael porter (1980,1985,1990), “ five competitive forces are the essential determinants of the industry structure. If these forces are properly assessed, individually and collectively, this will lead to the identification and subsequent deployment of appropriate (i.e. profitable) strategies”. The last two are distributors and suppliers to influence, if they would not supply raw material or would not distribute the firm’s product, firm can be affected greatly.

Threats are usually felt from the Competitors, Government, Natural Calamities, Distributors, Suppliers and Customers. In recent years it has been seen that most of the threats do come from natural calamities and competitors, however each and every form of threat has to be considered important while decision making.

The company has no specific power to stand against threats that are confronting, because they are just in the form of sudden attack at times, like the natural calamities have no specific region or time, it can appear at any time, a good example is that, any competitor can launch new product or any new sales promotion technique suddenly, without informing any one in the competition, what organization needs to do is that it has to be aware all the time, and should use pro-active approach, which means anticipation of the future events.

The internal weaknesses are those that are from within the firm, they can be in any department of the firm, for say if the company’s manufacturing quality is poor, than may be it is using an old technology that is out of date.

The company has the only power to improve the situation no one else would do it but the executives at the company, weaknesses appear from a series of pattern, for say that if the company is not up to date, may be it didn’t notice such changes in the market trends over the years, what the company should do is that it should keep itself aware of the changes in the society, changes in the buying behavior, and if nothing could be done, it should focus on its strengths.

External opportunities are somewhat related to the external world, it involves competitors and most importantly the customers.

Lets suppose that a competitor has increased the prices of the similar product that a firm is selling, it would be an opportunity for the firm to attract the competitor’s customers, in the same way if the customers are now willing to see changes may be because the product they are using is in its maturity stage, which means that it’s a sort of surety that now the product would start loosing its share instead of gaining, so here is also an opportunity for the firm to conduct some research and launch a new product, that can snatch the market share from competitors.

Internal strengths have an important role to play here, it is because of these that a firm can take those opportunities, a weak firm cannot be an opportunist.

If the firm is having strengths than it should realize them as quickly as possible and should start working more on them rather than wasting time and knowing them after the time has gone, the best way to know the strength’s is to forget the company’s weaknesses and analyze what it is having right now, what operations it is conducting and how much it has been supported by others, besides proving that firm is having strengths, it could be a very handy option in the company’s profile on the basis of which creditors or shareholders invest.