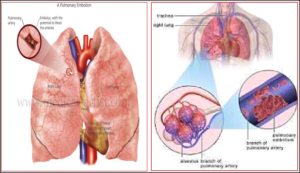 There are following objective to study pulmonary embolism;

Pulmonary embolism (PE) is a blockage of the main artery of the lung or one of its branches by a substance that has travelled from elsewhere in the body through the bloodstream (embolism). 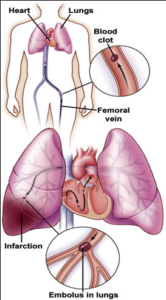 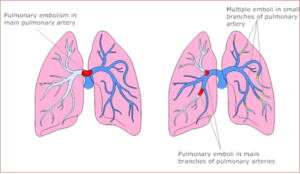 Pulmonary embolism can be life-threatening, but prompt treatment can greatly reduce the risk of death. Taking measures to prevent blood clots in your legs also can help protect you against pulmonary embolism. 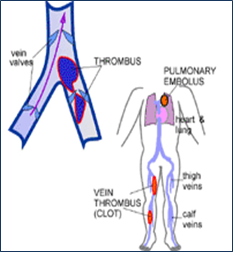 Severe cases of PE can lead to collapse, abnormally low blood pressure, and sudden death. Symptoms of PE are typically sudden in onset and may include one or many of the following:

More severe cases can include signs such as

About 15% of all cases of sudden death are attributable to PE.

Pulmonary embolus is the end result of a deep vein thrombosis or blood clot elsewhere in the body. Most commonly, the DVT begins in the leg, but they also can occur in veins within the abdominal cavity or in the arms.

Examples of these include the following:

Factors in the vessel wall:

Factors affecting the properties of the blood : 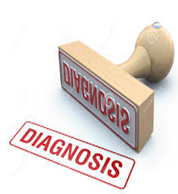 shortness of breath. The health care professional will take a history of the chest pain, including its characteristics, its onset, and any associated symptoms that may direct the diagnosis to pulmonary embolism.

It may include asking about risk factors for deep vein thrombosis. Coughing up blood sputum may be a sign of pulmonary embolism.

Physical examination will concentrate initially on the heart and lungs, since chest pain and shortness of breath may also be the presenting complaints for heart attack, pneumonia, pneumothorax (collapsed lung), and dissection of an aortic aneurysm, among others.

With pulmonary embolism, the chest examination is often normal, but if there is some associated inflammation on the surface of the lung (the pleura), a rub may be heard (pleura inflammation may cause friction which can be heard with a stethoscope).

The surfaces of the lung and the inside of the chest wall are covered by a membrane (the pleura) that is full of nerve endings. When the pleura becomes inflamed, as can occur in pulmonary embolus, a sharp pain can result that is worsened by breathing, so-called pleurisy or pleuritic chest pain.

The physical examination may include examining an extremity, looking for signs of

It is important to note, however, that the signs associated with deep vein thrombosis may be completely absent even in the presence of a clot. Again, risk factors for clotting must be taken into consideration when making an assessment.

Basic testing may include:

The chest X-ray is often normal in pulmonary embolism. The EKG may be usually normal, but may demonstrate a rapid heart rate, a sinus tachycardia (heart rate > 100 bpm). If there is significant blockage in a pulmonary artery, it acts like a dam and it is harder for the right side of the heart to push blood past the obstructing clot or clots. The EKG can demonstrate a right heart strain.

Since the cost of missing the diagnosis of pulmonary embolus can be death, the health care professional has to consider the diagnosis when caring for a patient complaining of chest pain or shortness of breath. 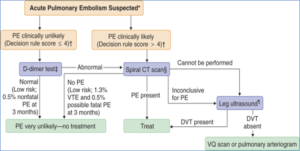 In the past, the gold standard for the diagnosis of pulmonary embolus is a pulmonary angiogram in which a catheter is threaded into the pulmonary arteries, usually from veins in the leg. Dye is injected and a clot or clots can be identified on imaging studies. This is considered an invasive test and is rarely performed.

Fortunately, there are other, less invasive ways to make the diagnosis. The decision as to which test might best make the diagnosis needs to be individualized to the patient and their presentation and situation.

If the healthcare provider’s suspicion for pulmonary embolism is low, a d-Dimer blood test can be used.

The d-Dimer blood test measures one of the breakdown products of a blood clot.

If this test is normal, then the likelihood of a pulmonary embolism is very low. Unfortunately, this test is not specific for blood clots in the lung. It can be positive for a variety of reasons including

D-dimer is not helpful if the potential risk for a blood clot is high.

If there is greater suspicion, then computerized tomography (CT scan) of the chest with angiography can be

done. Contrast is injected into an intravenous line in the arm while the CT is being taken, and the pulmonary arteries can be visualized.

It is very important that the contrast used during the CT angiogram be timed appropriately so that the bolus of dye is not diluted too much by blood as it travels through the lungs.

It may be wise to limit the patient’s exposure to radiation, especially in pregnant patients. However, since pulmonary embolus can be fatal, even in pregnancy this test can be performed, preferably after the first trimester.

Limitations of the test

There are some limitations of the test, especially if a pulmonary embolism involves the smaller arteries in the lung.  However similar problems are seen with the more invasive pulmonary angiogram. As CT scan has become more and more sophisticated, not identifying significant emboli is unusual. 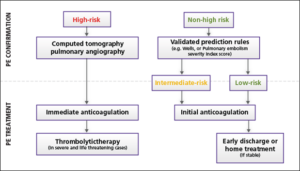 Ventilation-perfusion scans (VQ scans) use labeled chemicals to identify inhaled air into the lungs and match it with blood flow in the arteries.

If a mismatch occurs, meaning that there is lung tissue that has good air entry but no blood flow, it may be indicative of a pulmonary embolus.

These tests are read by a radiologist as

Limitations to the test

There are limitations to the test, since there may be a 5%-10% risk that a pulmonary embolism exists even with a low probability V/Q result.

Ultrasound of the legs, also known as venous Doppler studies, may be used to look for blood clots in the legs of a patient suspected of having a pulmonary embolus.

Echocardiography or ultrasound of the heart may be helpful if it shows that there is strain on the right side of the heart.

The best treatment for a pulmonary embolus is prevention.

The first step in stable patients with pulmonary embolism is anticoagulation. This is a two-step process.

Warfarin (Coumadin) is the drug of choice for anti-coagulation. It is taken by mouth beginning immediately upon the diagnosis of pulmonary embolism, but may take up to week for the blood to be appropriately thinned or ant coagulated.

For those patients who have contraindications to the use of enoxaparin (Lovenox) (for example, kidney failure does not allow the drug to be metabolized), intravenous heparin can be used as the first step. This requires admission to the hospital and careful patient monitoring with blood tests.

Anticoagulation is usually suggested for a minimum of six months, but each patient will have their treatment regimen individualized. The blood test utilized to monitor warfarin therapy is referred to as the INR or international normalized ratio.

This test can be performed by finger stick or venous stick depending on the laboratory procedures. Essentially, this ratio is determined by measuring the

This value is divided by the lab standard normal value.

For patients with a pulmonary embolism, the warfarin dosing will be titrated so that the INR value will be 2.0 – 3.0, basically the blood needs to be 2 to 3 times thinner than the normal value. It is very helpful for the patient to participate in their health management by keeping a diary of their warfarin dose, the date of testing, and their INR values.

Pulmonary embolism can be fatal, especially if involves a large amount of clot. When the patient is unconscious, has low or no blood pressure or are not breathing, clot busting or thrombolytic therapy using medications like TPA (tissue plasminogen activator) may be considered. It is also often considered when signs of right heart strain are present.

In certain centers, a special procedure can be performed where is catheter is placed in the right side of the heart and the clot is essentially vacuumed out.

The diagnosis is often difficult, and it is estimated to that there are up to 400,000 cases of pulmonary embolus that are not diagnosed in the United States each year.

In those patients where the diagnosis is made, the mortality rate is less than 20% when considering all patients. Usually, however, the mortality risk is much less in most patients. The higher incidence of death occurs in patients that are older, have other underlying illnesses, or have a delay in diagnosis. Racial differences may also exist, but probably are due more to access to quality care than a specific genetic difference.

Minimizing the risk of deep vein thrombosis minimizes the risk of pulmonary embolism. The embolism cannot occur without the initial DVT.

Many patients with PE report a history of DVT, surgery, or some other condition that results in vascular injury or increased blood coagulability. Patients may describe a sudden onset of dyspnea and chest pain for no apparent reason. Some patients report severe symptoms, such as;

The severity of the symptoms partly depends on the size, number, and location of the emboli. Patients often appear short of breath, diaphoretic, weak, fearful, and anxious. They may be febrile, or their skin may be cold and clammy. Those in critical condition may develop severe chest pain, syncope, and chest splinting and may cough up bloody sputum.

Not all patients become hypoxemic because the increased respiratory rate increases their minute volume and thereby maintains gas exchange. However, some patients have signs of hypoxemia, such as confusion, agitation, and central cyanosis.

Depending on the severity of symptoms, patients and their families usually display some degree of anxiety. Because PE is life-threatening, their fears are justified and appropriate. Assess the patient’s and family’s ability to cope.

The most important independent measure before PE formation is prevention of thrombus formation. To prevent PE in high-risk patients, encourage early chair rest and ambulation as the patient’s condition allows. Even patients who are intubated and mechanically ventilated with multiple catheters can be gotten out of bed without physiological risk for periods of chair rest.

Provide active and passive range-of-motion at least every 8 hours for all patients on bed rest. Teach the family and significant others of an immobile patient how to perform passive range-of-motion exercises. If the patient is not on fluid restriction, encourage drinking at least 2 L of fluids a day to decrease blood viscosity. Use compression boots for patients who are on bed rest to increase venous return.