Pros and Cons of Designer Babies

Designer Baby’s terminology was published in 2004 in Oxford Dictionary. It is defined as children whose character and genetic make-up parents can artificially select before they are born. The technique used to do so is known as genetic engineering and is used to ensure that certain genes / characteristics are present or absent in the infant. Currently, it is not possible to customize a child’s physical characteristics such as appearance, type of body, hair, probable height, etc.

While genetic engineering has some benefits at the community level, such as having a strong character generation that can be useful to the society; yet there are some ethical issues that some people consider unethical and fiddling with the nature cycle. But this is still debatable, as pros and cons or the results yielded by this technology can be evaluated to declare it a viable measure to adopt for having a better generation (Bliss, 2012, p.5). 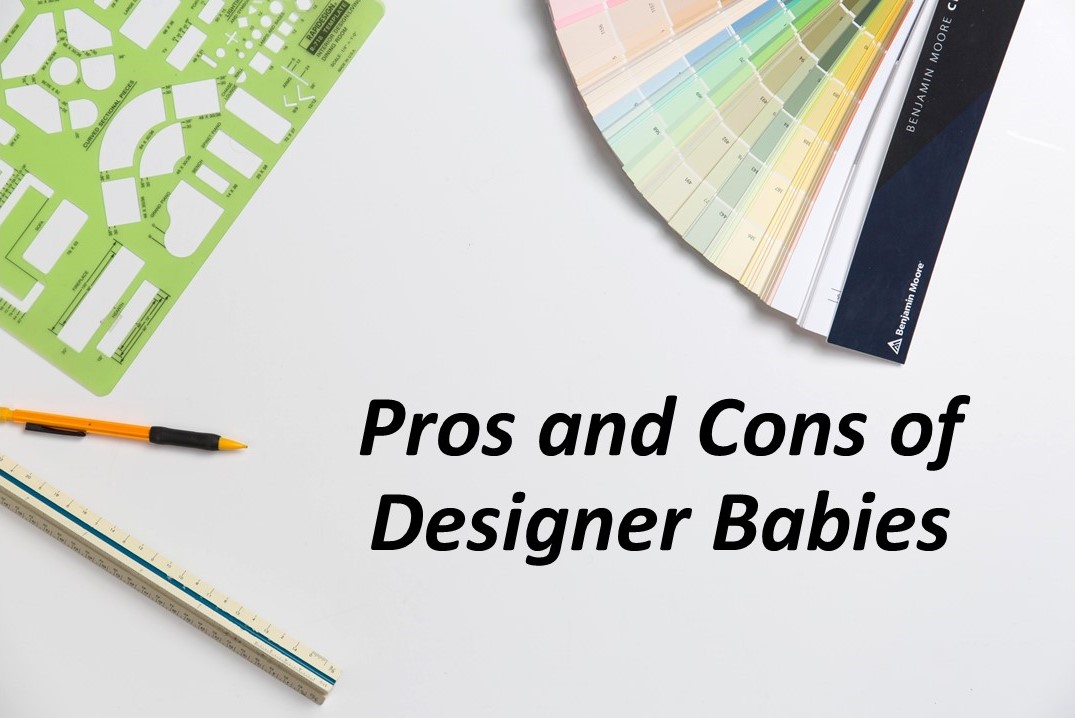 Impact on the Evolutionary Process and Future Generations

Designer babies’ technology, to some people is a chance for better, healthier and intelligent generation but there are few who consider it as “playing God” and trying to program a human being. Both concerns are correct in their perspectives as this technology can be used to improve lives and at the same time it can be used to harm people as well. One of the positive effects that can be achieved through this technology is that it can control the genetic diseases by creating the cures in a child way before his birth.

There are a number of diseases in the world, which are still in-curable such as bubble boy, cystic fibrosis and several more. The technology ensures that viruses or the causes of these diseases are not transmitted to next generation genetically. People would not fear of transmitting deadly diseases to their next generations through genes. Baby designing gives us a vision into future where heredity diseases would be swabbed out. This technology in turn, can improve the health standards of society tremendously then as it is known today (Deane and Peters, 2003, p.38).

With the advancement in technology and easy availability of baby designer technology, the genes alteration will not stop at disease treatment. Parents would definitely demand at a stage, that genes of their children be altered or selected in a way to choose their children’s skin color, level of intelligence, aptitude for making him a better child in community. The element of “Human Factor” will exist no more as everyone will be like super human having all the good character traits and capabilities. This would create an imbalance in the society by decreasing the human diversity or may even result in a kind of genocide (Levine and Suzuki, 1993, p12).

Genetic screening is the science that helps the doctors to study genetically transmitted diseases through DNA. It can reduce the chances of being born with several diseases like Down syndrome, spinal muscular atrophy, rare blood disorders such as Diamond-Blackfan anemia (DBA) etc. Families with inherited medical conditions such as diabetes, obesity, hypertension, thalassemia, cancer etc may desire to go for designer babies to prevent next generation from inheriting such diseases. With the help of this technology, parents can be assured that their children won’t have to struggle against same illness which they or any other family member is going through (Turner, 1984, p.242).

Designer Baby technology is likely to have very negative effects on the society. It will increase the fear and hatred towards the children who appear different or have extra-ordinary capabilities in some specific field. This technology will lead to discrimination on the basis of certain qualities or traits. Since this innovation is prohibitive in cost, only the genetic enhancement will be available to children of rich parents. Those who are unable to pay will be viewed as low status, causing a larger divide in society (Little, 2002, p1).

The adoption of designer baby technology to tackle the problem of diseases can be supported to some extent but its use for cosmetic reasons or the genetic enhancement has spearheaded a lot of controversies. Even if it is used for the treatment, the ethical issues cannot be ruled out.  As it is very evident that this technology is not going to stop at medical treatment, it would rather, in future deal with enhancement of physical abilities as well as appearance of the children having under gone this technology.

Critics point out that level of biodiversity in the human race will plummet, which will result in long term disasters. The generation will be more of robotic nature instead of being adaptable to changing environment / scenarios. The traits or characteristics decided by the parents for their child will eliminate the say / will of the child in his / her life. Parents who are zealous about sports would definitely wish for their child to prosper in the same sector and therefore his traits will be chosen accordingly. However, at later stage, the child may not want the same. It ultimately reduces the child’s freedom / liberty to decide about his future (Green, 2007, p.22).

Baby software development is difficult to understand and embrace. We never know when a specific alteration may lead to a new disease or the incapability. We as humans did not enter this world by our own choice. There are a number of things in this world which are beyond our capability to apprehend and understand. We should really realize that it is not possible for humans to control everything in this world even if we desire to do so.

Despite all of the concerns against the baby designer technology and its ethical implications, its potential towards a healthier and better generation cannot be ruled out. However, further testing and research will be required to educate the society on pros and cons of this technology. There is a need to study all the positive and negative effects of this technology, so that it can be used with more responsibility and credibility when it is fully developed.

Pros and Cons of Organ Donation