The Ohio landscape have the five physiographic regions, which have the own geological profile and the distinct communities, different geographic size and the different specie of the plants and animals. There is the strong correlation between all the five regions as the geological, physical features and the plant distribution are different, the environmental factors, soil types, and the climate is different in every region.

The plains have the two rolling plains that are known as the Great Lakes Plains and the Till Plains; however, the Great Lakes Plains has expanded to the southward with the shores of Lake Erie and have reached to the 10-mile-wide belt towards the northeastern Ohio. It is furthermore broadening in the direction of the west with the 50-mile-wide with the northwestern Ohio. Both the plains have the highest point’s example, the Campbell’s Hill of the 1,549 feet. However, the larger ancient lake is also known as the Lake Maumee because there are flat plain and is in the west of Cleveland. There are the beach ridges, black soils. There is poor drainage system but the city has highly fertile ground and the dominant crop. People there speak Spanish, Arabic, and Somali, Japanese etc.

The Till Plains is in the southwestern. The till plains have the fertile region, which is in the south of the Lake Plains and known as the rolling hills. There are the series of moraines with the glacier-created mounds that are made up of the rocks and soil. However, new drainage patterns are made there.

There are the ancient streams and the area or region is less hilly, the region is deficient in the rugged quality and there are the cutting new paths; the stream there reversed the flow, the gravel called the “kames”. There are hills of sand and the smaller tracts of forests in hundreds of acres.

The bluegrass area have extends towards the northward, it is in the south-central Ohio. The Bluegrass Region is consisting of the flat-topped, sharp cliffs and the plateau-like hills. There are the gentle slopes, small caves, deep valleys and the sink holes etc.

Today, the Ohio regions have the great geographical profile and have different communities of plants and animals. There is significant or important geological distribution or the allocation of plant species. The regions have the different ecological regions and the zoological features.

Maps of Physiographic regions of Ohio 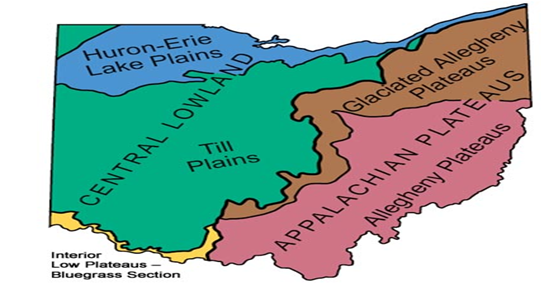 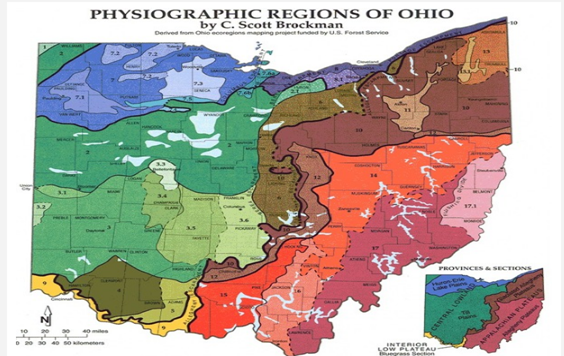