Renewable energy is generated from natural sources that are sustainably and constantly replenished. There are 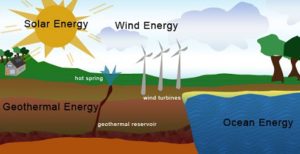 different technologies used for the creation of the energy and this help impressively in the improvement of efficiency in homes, most especially in Macedonia, bringing the best out of family health. The energy used in Macedonia, Ohio reduces dependence on the common curbs global warming, fossil fuels, which remains a severe problem, but still improves the quality of air. (“Renewable Energy”)

The three primary types of energy that power homes in Macedonia include:

These types of energy resources have less impact on the environment in Macedonia. Solar energy is inexhaustible, cheaper, and can be used to light up many power machines and devices with little or no negative impacts on the environment, although takes more land spaces. The wind energy is pollution free, and even offers great benefits. Geothermal energy relies primarily on hot water and stream reservoirs occurring beneath the surface of the earth, this comes with some negative impact on the environment such as production of harmful gases and fear of toxic substances in the atmosphere.

Macedonia definitely has nuclear wastes to dispose of, and there are radioactive waste management services to deal with these. Moreover, these power sources have always been used, although some of these are restricted to certain areas due to their nature, for example the geothermal energy benefits majorly the people that live around the community in which it was developed. The positive impacts these have on the environment supersedes the negative impacts. These renewable energy resources produce low emissions that could be detrimental to the environment, but may cause some pollutions and emissions when they are being transported. For instance, photovoltaic (PV) cell production generates some toxic substance that can contaminate water resources. Additionally, the installation of these resources can interrupt wildlife habitat and land use, and some of the technologies used can consume a large amount of water over time.

These sources of energy have a moderate impact on local air and water quality. Solar energy does not affect local air significantly. According to the committee on U.S. – China Cooperation on Electricity from Renewable Resources, “solar power tower LCA estimates NOx and SO2 emissions of only 15 and 43 mg/kWh respectively.” This is relatively low. Geothermal energy has some impacts on local air and pose a few risks to those living in the environment it is developed. This is as a result of the fact that the technologies used in converting the resource to electricity could emit some toxic substances. Moreover, the environmental impacts differ with respect to the type of conversion and cooling technology used. While wind energy is the purest of them all, it doesn’t affect the local air, only affects land use, wildlife habitat (birds and bats), and the noise that comes from the turbine produces noise pollution. On the other hand, solar energy does not require water to generate electricity, however, some solar thermal systems use water, but the water can still be reused. Geothermal energy mainly uses water, and thus has impacts on the water quality and consumption. This is because geothermal plants have to re-inject water into the reservoir. In wind energy, the wind turbines do not have any impact on water quality, but only uses water during the manufacturing process of the steel and cement for the wind turbines. (“Conserve-energy”)

The average amount of energy consumption in my home is about 820 kWh. Therefore, the annual usage for a year should be 9840 kWh. According to the US Census Bureau, the Macedonia, Ohio population and demographic statistics show that there are about 4,545 housing units as of April 1, 2010.

The estimation of my community is given below:

The solar energy will always be recommended for the Macedonia, Ohio. Basically, the solar system can power an entire community. According to “Inland Power,” this is known as community solar; in which people in a community come together to build a larger solar array. Solar energy has the capacity to serve a whole community. There are organizations that provide this services to bigger community, just like the Inland Power, Zen energy, Solar Power Authority, and many others. They specialize in developing community solar energy and powering any community. The estimated energy demand of my community can be catered for and even at an affordable cost. (“Choice.com) Furthermore, the cost of electricity in Macedonia is on the high side and many of the members of this community are considering installing solar panels even in their homes. (“Sunshinecatchers.com”) So, this is a realistic alternative power source for Macedonia, Ohio. There are tendencies that people will consider the community solar energy as a welcome development. This is because; they would want to save more on electricity bills, guarantee of energy security, (“Solarpanelsd.com”) total confidence on power supply and energy independence.

Solar had gotten so cheaper and faster to install. According to Jacob Goldstein (2015), solar power has become so cheap due to the panels being used for the installation are now five times cheaper than the first panels and they can be easily installed within a short time. Additionally, this conversion can be achieved through community effort from schools, banks, crowdfunding, and more. The only impact this would have on the community in the sense that land use will increase since it’s for the community and does not require to be installed on rooftops. Additionally, during the manufacturing stage of the system, there would be some emissions and water would be used in the power plant cooling. Furthermore, transporting it to the community may cause some hazardous risks too. (“Union of Concerned Scientists”)

Miracle of the Killer Bees: 12 Senators Who Changed Texas Politics