This paper has briefly discussed the OPEC cartel and fluctuation in the oil prices. OPEC was established in Baghdad, Iraq and five countries signed the agreement in September 1960. In the next section, this paper has discussed the fluctuations in oil prices and clashes between OPEC members that have been observed and are yet to be solved. The global market for oil has been shaped by the OPEC decisions but recently, the rapid rise in the production of shale oil has reduced the impact of efforts made by OPEC to control global oil market. Moreover, OPEC cartel has also discussed in the paper that had been under severe pressure since oil prices started to tumble and leading some to say that OPEC cartel is falling apart and in 2016, the prices of oil rose by over 5 percent. OPEC cartel has forced by the boom in shale production in the U.S. to increase its forecasts of crude supply for the year of 2018 but it said that intensifying global demand for oil would keep helping eat up the excess supply. The difference of opinion between OPEC members on the ideal crude oil price highlighted the concerns over growing shale output and the ability of the United States producers to crash the market potential. Furthermore, in the next section, the influence of OPEC on oil prices has briefed in the paper to understand the phenomenon behind oil price fluctuations considering its demand and supply factors. 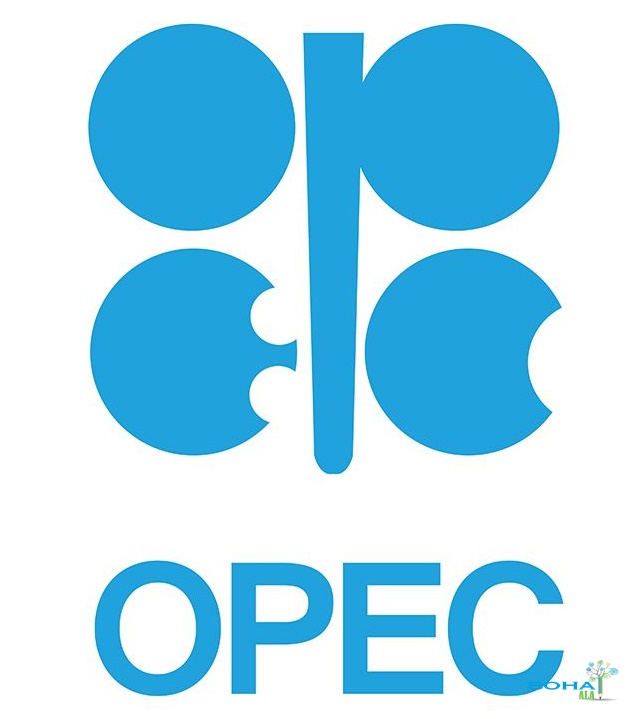 OPEC (The Organization of the Petroleum Exporting Countries) was established in Baghdad, Iraq and five countries signed the agreement in September 1960 namely Iraq, Kuwait, Islamic Republic of Iran, Saudi Arabia and Venezuela. These countries are the founder members of OPEC, later joined by Qatar in 1961, Libya in 1962, Indonesia in 1962, UAE in 1967, Algeria in 1969, Nigeria in 1971, Ecuador in 1973, Gabon in 1975, Angola in 2007 and Equatorial Guinea in 2017. OPEC Country wise market share is given in Appendix A. Indonesia decided to suspend its membership from OPEC in 2016. Currently, OPEC has 14 member countries.

In the oil market, production cuts are one of the most powerful tools of OPEC. In 1982, 13 members of OPEC decided to cut their oil production on daily basis by almost 700,000 barrels so that maximum total output could be achieved of 17.5 million barrels a day. In November 2016, OPEC non-members, as well as members, decided alike to reduce the production of oil to check the strong volatility and imbalance in the global oil market. OPEC decided to reduce the output by almost 1.2 million barrels a day from January 2017 so that maximum of 32.5 million barrels a day could be set. Although the agreement was to last for six months, it was extended later for another six months. Since then, many fluctuations in oil prices and clashes between OPEC members have been observed that are yet to be solved. The global market for oil has been shaped by the OPEC decisions but recently, the rapid rise in the production of shale oil has reduced the impact of efforts made by OPEC to control global oil market. This paper briefly discusses the OPEC cartel as well as fluctuations in oil prices.

The OPEC is the example of international cartel, (different entities agree to the certain price/quantity and agree to collude, then they create cartel that is type of oligopoly market formed and operates secretly and it is up to the members of cartels if they want or do not want to keep their cartel agreement intact). The international market for Oil has progressed through the earlier concentration and dilution cycles where market players were challenged by the competitors and assumed control.  The true power of OPEC cartel lies in the organization control over spare production capacity that so on low-cost. In terms of production capacity, reserves, dependency on oil revenues, and economic absorption capacity, the member countries of OPEC are asymmetric. Thus, the regional OPEC countries’ geopolitical manoeuvres fuelled by the foreign involvement strain the OPEC cartel’s cohesion as the economic alliance.

OPEC revised higher production growth of 2018 for the consecutive second month in 2018 from outside the oil cartel as the output was spurred from the United States and other global producers due to the higher crude prices. OPEC cartel had been under severe pressure since oil prices started to tumble and leading some to say that OPEC cartel is falling apart. The renewed interest in growth opportunities and steady recovery in oil prices since 2017 has led the major catching up of oil in exploration activity term in 2018, both in offshore deep water and in the shale industry.

The OPEC members gathered in September 2016 and decided to cut the oil output for the first time after 2008 and this was an informal meeting and all the members agreed this cut in output was modest. In 2016, the prices of oil rose by over 5 percent while Saudi Arabia insisted that other members have to follow the suit if they want Saudi Arabia to cut output as well. The oil market has been struggled since 2016 to find the market bearing in the new market landscape. Since 2014, oil prices have increased to their highest level, buoyed by outages’ spate and economic upswings in the world are boosting demand for fuel and oil. According to the report by U.S. Energy Information Administration, crude stockpiles fell in mid of January 2018 by 1.1 million barrels. Then it was reported by American Petroleum Institute that 4.8 million barrels of crude stock have increased in the United States. On New York Mercantile Exchange, crude futures in the United States increased $1.14 to $65.61 per barrel. Both gasoline and diesel inventories have risen in the United States in January 2018. The crude oil supply was increased along with the higher prices and this has created the risk for OPEC member to cheat on their cut deal, as said by analysts.

OPEC cartel has forced by the boom in shale production in the U.S. to increase its forecasts of crude supply for the year of 2018 but it said that intensifying global demand for oil would keep helping eat up the excess supply. According to OPEC, the supply of non-OPEC producers should rise by 1.4 million barrels per day for the year of 2018. The prices of crude had increased by over 50 percent in the second half of the year 2017, with Brent hovering about 70 dollars per barrel much of January 2018. Limited supply and rising demand are the two main factors that had helped the oil prices in recent months. Appendix B shows the change in forecast plan of OPEC.

As said by the International Energy Agency, the production of shale has so much risen already that OPEC crude demand would stay below the current production of cartel through 2020 and it can put the group under pressure to limit output for more than anticipated by most members. The difference of opinion between OPEC members on the ideal crude oil price highlighted the concerns over growing shale output and the ability of the United States producers to crash the market potential. Saudi Arabia is on one side that wants oil price at 70 dollars or more per barrel, and Iran is on the other side that wants oil price at around 60 dollars per barrel. The difference of views has driven this split that over whether 70 dollars per barrel would send the United States shale companies into the production anger that could cause the crash to prices.

Oil demand in a normal good or more precisely it is income elastic which means that demand for oil increases with higher percentage along with the increase in income. Oil is not a luxury product but necessity for transport this is why usually people are willing to pay for the higher oil prices. On the other hand, oil supply is inelastic in the short-run due to the significant production cost and oil demand is inelastic to price i.e. even doubling the oil prices, there will be not any significant impact on oil demand. This is the reason that oil consumption is vulnerable to the exploitation made by OPEC cartel. The supplies of OPEC and its allied are expected to be controlled at the levels where demand is met even after the decline in the crude inventories. The global production limit is considered to be continued by the OPEC and its allies including Russia beyond the end of the current year and they will schedule the meeting in June to assess the market situation. The compliance rate rose to 85 percent in March for 10 nations out of OPEC that participated in the cuts from the revised 78 percent in February. Crude stockpiles fell probably in the United States by 600,000 barrel and nationwide inventories fell below the average of five years first time since 2014 in March.

In 2017, when OPEC announced its decision that it is extending the 1.8 million barrels’ oil production cut per day until the first 2018’s quarter in order to recover the oil prices, the oil market anticipated the OPEC move and there was no strong impact of this extension on prices of crude oil. This situation was opposite to the surge in prices of commodity witnessed when OPEC deal was announced first in November 2016. WTI prices of crude oil had increased by over 9 percent in November 2016 following the agreement of output reduction initially, as opposed to jumping off just 2 percent in prices of oil when output cuts extension was announced by OPEC. It was indicated by this trend that there is not a significant impact on oil prices by proposed output restriction, moreover, this trend has hinted the fact that power of OPEC is waning to influence the crude oil prices.

The sticky oil prices of Oil in the range of 50 to 55 dollars per barrel, driven by the production cuts of OPEC, shale producers of the United States have reinstated their exploration and drilling plans. The significant rise in the world rig count (gas and oil) had evident it, from 1,678 units to 1,917 units in end of November 2016 and in end of April 2017 respectively. The oil production of the United States, in line with an increased drilling, also rose from 8.7 million barrels a day at the announcement time of deal by OPEC to 9.3 million barrels a day in 2017. It has believed by the experts that the power of OPEC has largely lost to dictate the oil prices despite its significant contribution to global oil supply. The key driver factors of oil prices can be a supply of U.S. shale and economic growth in China.

It is concluded that an exceptional wisdom and fortitude are required to overcome the challenges faced by OPEC. It is yet to regain the boost demand for oil by the world economy at the time when sources of energy are to be diversified. Intensive investment in the production of shale gas especially in the United States might be the primary uncertainty source for the oil market. As far as the endurance’s power of OPEC goes, the Vienna consensus has reached despite the fluctuations in oil prices and the clash between OPEC members. It remains to see that whether the subsequent agreements and Vienna that requires the goodwill of non-OPEC producers as well as OPEC to be accomplished are all that it takes to reverse the oil prices’ downward slide and restore the market order. It has no harm to incorporate some of the forecasts into the OPEC pricing power analysis. However, the impact of all demand and supply factors should be stressed that is dependent on the oil market. Although oil can be said a political commodity, it has multiple economic factors and its prices respond largely in the long run to global economic factors. 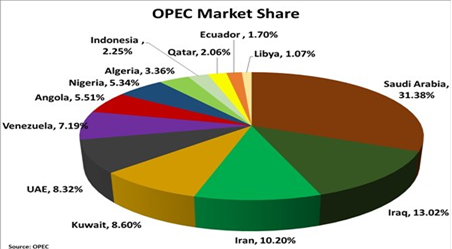 Change in forecast plan of OPEC, millions of barrels per day 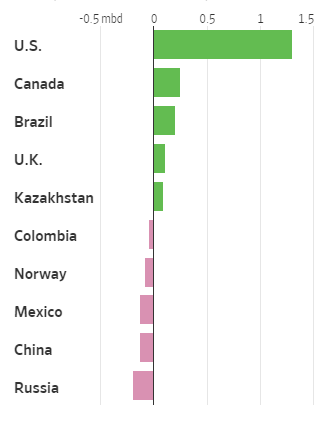