In this paper, the overall intelligent management system of air conditioning for vehicles is focused with all relevant information. The discussion is to review literature and analyze that how vehicle air conditioning actually works with the help of an engine. In a vehicle, there is compressor to run the air conditioning system, and this compressor is powered by the engine. It is detailed with adequate information that how AC system of a vehicle increases the consumption of fuel as extra load is put on the engine capacity. So, an engine has to be good enough to run an AC system with proper performance. The major part of this research paper is to analyze in detail that how AC system of a vehicle is controlled and managed by its energy management system, which is actually a nonlinear dynamic management system. This energy management system along with engine is well managed intelligent control design to ensure that system works efficiently providing most efficient performance in terms of fuel consumptions and other relevant functions. The paper will also closely look at an old system called Coordinated Energy Management Systems (CEMS) and it will also describe a proposed Intelligent Energy Management Control (IEMC), and will prove that IEMC is better than the previous system CEMS.

In this research paper, the focus is to describe the functioning of AC system of a vehicle, which is run by an intelligent energy management system along with the vehicle’s engine. The actual goal is to review the functions of this intelligent energy management system that how this system works with various other complex but relevant systems like air conditioning, environment, driver, and engine. After reviewing the basics of this system, the research will look around for other various systems, and compare IEMC with another system called CEMS. Both systems will be compared with each other on various points. Like it will be compared and explained that what core basics of both systems are. It will also be discussed that how one system is better than the other, and why the other system lacks that kind of efficiency. It is important to mention here that AC system of a vehicle is not a simple system to manage and that’s why information system support is taken to keep things on the right track. If engine is not able to provide proper power to the compressor of the AC system, then it will not perform well, but still it will consume a lot of fuel. So, a well-developed and designed system has the capacity to work well with other system, and ensure that AC system gives its better performance in terms of cooling the vehicles, and using fuel more efficiently. 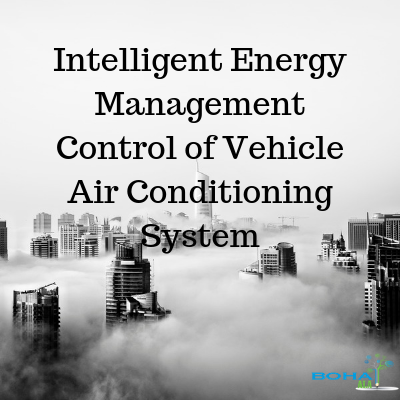 The above mentioned research discussion will be based on the qualitative research method, and under this method, a brief literature review is selected to get the relevant data. For this literature, primary data collection method will be used by the researcher. It means that data can be taken from books, newspapers articles, research papers and journal articles etc. But to provide more authentic information and paving the way forward for future research, this research study will focus only on journal articles and research papers. It is done because the research needs to come up with real facts and figures to give a proper conclusion, which allows researchers to look at different aspects of this research study, and identify any gaps for the future research. The hypothesis of this research study is based on the conclusion after reviewing literature and analyzing its data, and the hypothesis is to prove that IEMC is better than CEMS. It will also be concluded in the research study that why IEMC is better because it has various efficiency factors, which CEMS did not hold. A system is better if it has more capacity to work with other complex systems, and provide effective performance in any given circumstances like working well with other systems, and provide best fuel consumption.

Every research study has its own importance to play its part in research field. The IEMC system is a good one to provide fuel consumption efficiency to the AC system of a vehicle. The air conditioning system has a viable impact on the engine’s power consumption ability. A research study conducted in 2013 analyzed that how impact is made by an AC system on the power consumption with relevancy to electric vehicles. The results showed that extensive amount of power of battery was used by the AC system (Mebarki B. , Draoui, Allaou, Rahmani, & Benachour, 2013). A research study was conducted in 2011 to see that if a coordinated energy management system has the ability to reduce the overall consumption of energy or not. Their findings revealed that CEMS can reduce consumption of energy through its well-designed management (Kouzani, Khayyam, Hu, & Nahavandi, 2011).

It was revealed in a study that in terms of electric vehicles, the biggest problem is consumption of energy from Li-ion Batteries. The result of the study showed that air conditioning system consumes so much energy from the engine, so a proper model is needed to manage this energy consumption (Mebarki, Draoui, & Allaoua, 2014). According to (Sandoval & Grijalva (2012), intelligent management systems are need of the hour for the world to manage the energy consumption issues for vehicles, especially for electric vehicles. They concluded that an intelligent management system has so many benefits and one of them is energy consumption with efficiency. In the end, a research study conducted in 2012 compared two energy management systems, one was IEMC and the other was CEMS. After analyzing various kind of driving patterns, the study concluded that working of the IEMC system is way better than the old CEMS system, as IEMC is more efficient in terms of optimizing the air conditioning integrated operation, and it also optimized the performance of engine to provide better fuel consumption (Khayyam, Abawajy, & Jazar, 2012).