General Motors Company (GM) is the world’s largest producer of vehicles (Datamonitor, 2006), selling a range of automobiles on the market. With its biggest commercial footprint in North America, it designs, produces and sells vehicles worldwide. The company has manufacturing, distribution or warehousing operations in about 55 countries, in addition to the 20 assembly plants and 30 distribution and warehousing centers in the US. Canada is another big facility hub where GM operates in 20 cities. But the company’s position at the top is seriously under threat, if the latest reports are an indication. Toyota was able to sell more cars than GM in the first quarter of 2007, pushing GM for the first time into second place (USA Today, 2007). GM has its headquarters in Detroit, Michigan and employs about 335,000 employees. Buick, Cadillac, Chevrolet, GMC, GM Daewoo, Holden, Hummer, Opel, Pontiac, Saab, Saturn, and Vauxhall are all models. During the fiscal year ended December 2005, GM posted sales of $192.604 million. GM also owns equity partnerships in some regional subsidiaries and joint ventures like New United Motor Manufacturing (NUMMI), Suzuki Motor Corporation, Isuzu Motors, Shanghai GM, SAIC-GM-Wuling Automobile Company and CAMI Automotive (Datamonitor, 2006).

Yes, the car market has become very competitive, with big players such as GM, Ford, Toyota, Audi, BMW, VW etc. in addition to a number of local car players, vying for the international market. With technology playing a major role in advancements of the features in a car, ICT helping in making the care more intelligent, marketing communication techniques have started playing a major role in convincing the customer. General Motors also outlined plans for its ICT needs and the company signed $15bn (£ 8.5bn) deals with IBM, HP, over the next five years EDS, Capgemini, Compuware Covisint and Wipro (Brown, 2006). General Motors has also unveiled E-Flex electric architecture, configured with GM’s newest, most efficient hydrogen fuel cell system to date, at the recently held Shanghai Auto Show (GM, 2007). Company believes that the fuel cell technology has the potential to be a competitive alternative to the internal combustion engine – in size, performance, durability and cost. Internationalization offers the company an opportunity to plan moves for a wider range of customer base. Strategic decisions are concerned with the issue of setting a direction for the organization to move or the course the organization will follow. It is not counted merely in terms of the financial results but other factors like brand equity, market standing, media publicity, customer loyalty etc are the yardsticks which measure the strategic moves. Strategic management function becomes all the more important in case of large organizations like General Motors. New business approaches are followed as market demands improve operating pace. Strategists are more confident and relaxed with the prospects of expansion growth and once the company feels safe and established enough on the home ground, it can be very successful start thinking about crossing borders and joining the globally fiercely competitive arena.

Globalization has led to a rapprochement of the world community. This has also brought about some level of uniformity in brand communication efforts. Consumer behaviour, is one of the major marketing fields. To be a successful marketer knowing how to attract and retain customers and what products and services they buy and how these fit into their lives is essential. The art of communicating to current customers as well as prospective consumers takes a lot out of the administrative brain storming sessions into today’s market driven economy framework. General Motors has so far maintained a good reputation in the market with a strong brand portfolio. The company has on board global brand names like Saab, Chevrolet and Cadillac. The importance of branding is recognized as one of the key weapons for firms in fiercely competitive markets. Brand investment has been identified as contributing to positional advantages and thus performance (Matear et al., 2004). Brand image is defined by Keller (1993, p. 3) as “perceptions of a brand as expressed in customer memory brand associations.” GM appears quite successful in its efforts to establish a distinguished brand identity for itself.

The Asia-Pacific market has proven very positive and has immense potential for the business. The Asia Pacific market with countries like China and India, has a big market potential for cars. With advancements in technology demand for new cars is on a record high. The new customer expects a new model from the company every year. Datamonitor (2006a) conducted a study on global new cars and found that the market grew by 3.1% in 2005 to reach a value of $839.7 billion. By 2010 this market is forecast to have a value of $1,066.3 billion, an increase of 24.5% since 2005. Therefore there’s immense potential in the Asia Pacific region. At present the Asia pacific market share stands at 26.4% of world share (Datamonitor, 2006a), but with the IT boom in India and China, rise in per-capita income, the spending capacity of the customer in this region is on an upswing. Toyota takes a lead over GM in global sale of new cars.

Despite the challenges in the Asia-Pacific region, GM has registered strong revenue growth in the past, in this region with continued strong performance by Shanghai GM in China and Holden in Australia. For 2003, GM Asia Pacific (GMAP) earned $577 million, more than three times the net income of $188 million in 2002. Company is also aggressively expanding its operations in India, another big market in the region. Such strength in this region has the potential to help the company in offsetting its losses in some other regions (Datamonitor, 2006). Seeing the potential of this market, GM has elaborate plans to use China as an important manufacturing, outsourcing, exporting and regional research base (World News connection, 2007). On April 22 this year, while detailing its plans for China, Rick Wagoner, Chief Executive Officer of GM said that the company would double its production capacity in China by 2010. The lower labor and production costs in China are a big attraction amongst leading car manufacturers, which is leading them towards China. General Motor’s existing presence in the country will help the company in finding a better foothold in the region. In fact General Motors is also manufacturing parts in its Chinese production units for being exported back to US for fitting into ‘Made in USA’ cars (World News connection, 2007). This underscores the vitality of the region in determining international strategies for General Motors. With competition becoming more stiff and shrinking margins companies are hard pressed to continue their operations in profitable manner. The alternatives being offered by the Asian region will help in leveraging the economies of scale.

General Motors is major existing operating revenues come from the North American region, company’s largest geographical market, accounting for 74.8% of the total revenues in the fiscal year 2005 (Datamonitor 2006). But at the same time operating margins in this region are under constraint with increasing competition. GM has therefore tried to rejuvenate some of its operations in the region. The company is working towards making 2007 as a break-out year for its near-luxury brand, Buick (Gritzinger and Wong, 2007). Buick has started shedding its stodgy image with two performance-oriented 2008-model-year variants, the Lucerne Super and the LaCrosse Super. Company is in an overdrive to change its image and style because of some below par results in recent months. Mike Jackson, VP-marketing and advertising for GM in North America admits, “Our share is lower than we like” but he also underlines that GM surprised industry pundits with its better-than-expected sales numbers last February. The results for first-quarter 2007, however, declined registering a fall of 5.6% vs. a year ago in sales (Halliday, 2007).

Fitch Ratings (quoted in Medical benefits, 2007) also reports that General Motors is under pressure from the increasing health care costs, particularly legacy costs. This results in competitive disadvantage for the company. Analyzing the two major companies Ford and GM, the ratings agency forecasts that the competitive disadvantage represented by health care costs (in terms of costs per vehicle) will actually rise for both manufacturers in 2007 from 2005 levels. The burden on GM is stated to be much greater, on account of the difference in U.S. other post-employment benefits (OPEB) paid to retirees and dependents. This fact was admitted by Rick Wagoner, Chairman and CEO of GM, while presenting the 2005 annual report of the company, when he said, “It was the year in which GM’s two fundamental weaknesses in the U.S. the market was fully exposed: our immense legacy cost burden, and our failure to change operating costs in line with declining revenues “(Datamonitor, 2006). Fig-2 depicts the healthcare costs for the company. 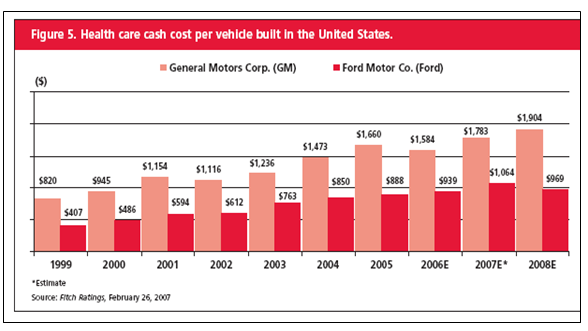 Bartlett & Ghoshal (1995), contend that organizations move into international arena using the strategies used back home and localizing some of the strategies marginally to meet the requirements of the new market/s. subsequently though, depending upon the market response and feedback for the products, company prepares itself for more. With more and more countries around the world opening up their economies under the new globalization regime, a company like General Motors can go a long way using a well planned internationalization strategy. Besides the ‘international strategy’ of exporting the items from its manufacturing plant in US to different countries around the world,  in general the strategies for making a foray into an international arena could be categorized as (Martínez & Quelch, 1996);

A multi-domestic strategy allows a multinational firm’s individual subsidiaries to compete independently in various domestic markets. The corporate headquarters manages financial controls and major marketing strategies, and could centralize some production of R&D and components. The ‘global strategy’ seeks competitive advantage with strategic moves that are highly interdependent across countries. In order to exploit potential economies of scale and learning, this strategy involves a high degree of concentration of resources and capabilities in the central office and centralisation of authority. Through transnational strategy an organization also enters into strategic partnerships to save time and money with its customers, suppliers and other business partners. General Motors seems to exploit a well-balanced mix of these strategies. While the company has been using some of its manufacturing bases outside US as a strategic unit, most of the planning decisions are being taken from USA with intelligent inputs from potential markets.