The effectiveness of drugs in pharmacology is determined by using the recommended EC50 of varied agonists’ concentration. EC50 is the concentration of agonist that produces maximum response at 50%. This experiment was conducted with the primary objective of comparing the potency of BU007 and BU006 on the pig bladder’s muscarinic receptor. This was conducted by immersing the bladder tissues of the pig into krebs solution baths before being exposed to BU007 and BU006 drugs of different concentrations. It is after these that the values of the receptor occupancy and the EC50 values of these two drugs were determined through by calculating them. The result of this experiment showed that BU007 and BU006 had different EC50 concentrations of 95.63% and 97.76% respectively. Besides, the t-test for the mean contractile response to BU007 and BU006 showed no statistically significant differences. From these experimental results, it was established that since BU007 produced a relatively lower EC50 than BU006, it was worth concluding that BU007 is therefore more potent compared to BU006 that produced a higher concentration of EC50, as compared to BU006, an indication that BU007 drug attained half of the maximal response in the experiment with lower concentrations.

A number of physiological processes are highly influenced by the receptors that are often activated in order to induce the signal cascades that further leads to the physiological responses. The receptors can also be inhibited in the patient to produce physiological responses by stopping the signal cascades from working. All the endogenous chemicals messengers that are found in the body (such as neurotransmitters or hormones) bind to these body receptors thereby instigating a physiological body response particularly on the body cells having these receptors (Rang, et al, 2007). It is this receptor that pharmacologists play with in altering the body physiological responses by using drugs with the ability to block or mimic the effects and threats caused by natural chemical messengers in the body. As outlined by pharmacologists, any drugs has two main features; efficacy that defines the degree of physiological response of the body after being initiated by the receptor chemical messengers with the ability to mimic. Secondly, drugs have the affinity that enables them to strongly bind to the receptors, an ability of the chemical messenger mimicking pharmaceutical drugs. The drug’s potency is the relationship that exists between the drug’s efficacy and the drug concentration, thus, representing the ability the messenger mimicking drugs to realize the highest level of efficacy possible with the lowest EC50 concentration possible.

From a pharmacological point of view, agonist represents drugs that enhance the receptors’ activities (those receptors that the agonist binds) so as to induce or facilitate a pharmacological reaction that is similar that showed when in its natural state. Notably, the agonist’s efficacy is more valued over its affinity. Unlike full agonists, partial agonists produce less response that is not as effective in enhancing the activities and operations of the body receptors. Contrary to agonists, antagonists are a group of pharmaceutical drugs that block or inhibit the normal activities and operations of the body receptors that they bind to, hence inhibiting any natural physiological response that would have been produced by the attacked receptors. As opposed to agonists where efficacy is of greater significance than affinity, antagonist drugs place value on affinity over efficacy that is always zero (Rang et al. 2007).

The drugs that were examined in this pharmacological experiment were both tissue bladder agonists and their potencies tested by the use of pig bladders. The pig bladder was used in this experimental given the fact that pig bladder have the M3 (type 3 muscarinic) receptors that also exist on the human bladder. Asserts Marieb & Hoehn (2010), the muscarinic receptors are presents on the walls and other soft parts of bladder muscles and hence stimulating muscle contraction of the body when bound by Ach (Acetylcholine). In particular, the bladder smooth muscles found in human contain M3 (70-80%) and M2 (20-30%) receptors (Choppin, 2002). The activation of M3 receptors results into a G-coupled protein and phospholipase initiated direct contraction. On the other hand, the activation of M2 receptors in the body tissues would result into indirect body contraction that takes place by inhibiting the activities of the receptors through G-protein and cationic current elicitation (Choppin, 2002; Mehdia et at, 2011). As earlier stated, the primary objective of this research experiment was to evaluate the differences in the potency of BU007 and BU006 on the muscarinic receptor tissues of the pig’s bladder. 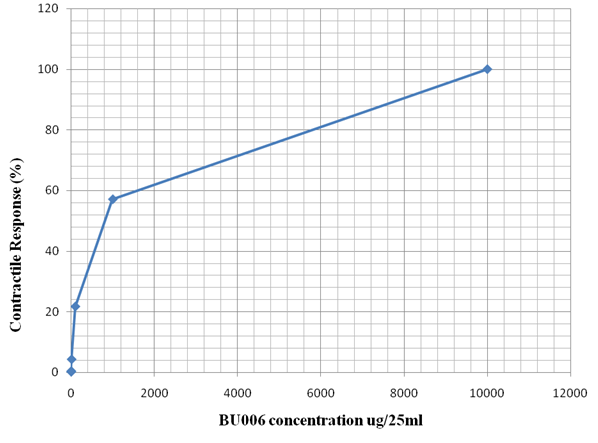 Molar EC50, pEC50 values and receptor accupancy for the BU006

Receptor occupancy for BU006 at EC50

Dissociation Constant (KD) for BU006 was at 10uM

The Molar Emax and Receptor Occupancy for the BU006

Receptor Occupancy for BU006 at Emax

Therefore, the space receptors have a value of 0.06%. 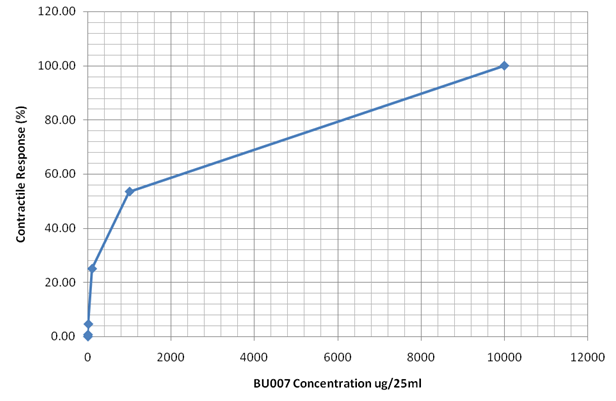 Part B: Combined Experimental Data for BU007 and BU006 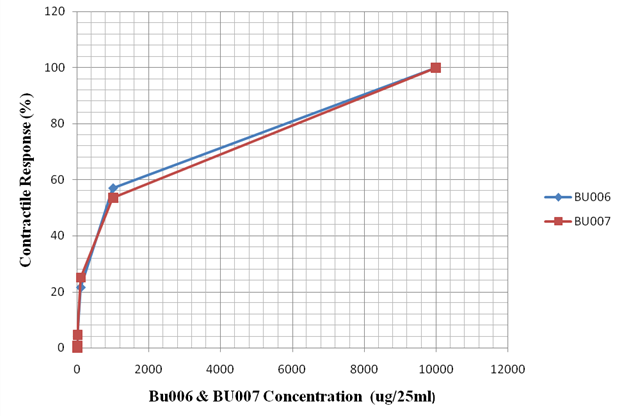 Fig.3, contractile response against BU007 and BU006 drug concentration at EC50 values for both drugs.

Converting the Molar EC50 to pEC50

Receptor Occupancy for BU007 and BU006 at Emax

From Fig.2 above, it was observed that BU007 reaches its maximum at lover values than BU06, hence more effective than BU006. The BU006 showed a weaker agonist curve and also appears more linear compared to BU007 that displayed stronger agonist characteristics. On the other, hand, BU007 agonist required more receptors to realize its desired EC50 maximal response while BU006 needed less receptor so as to produce its half maximal response. 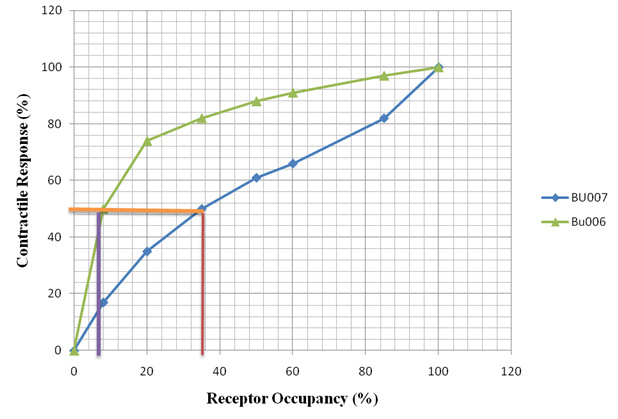 Fig. 4: Contractile response of the bladder tissues against receptor occupancy (%) for BU007 and BU006 using different drug concentrations at EC50 for both drugs 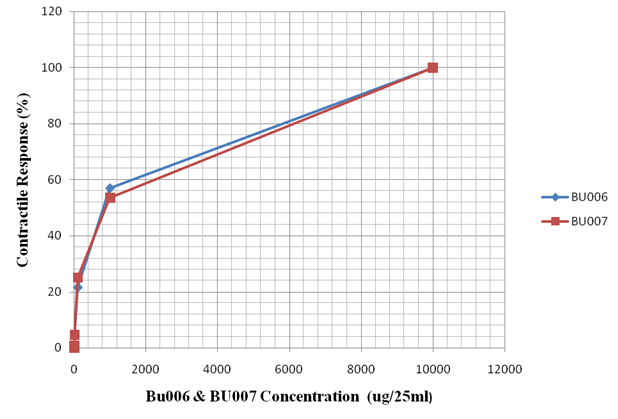 Fig. 5. Represents the Contractile response of the bladder tissues against BU007 & BU006 drug concentration at EC50 values. This test was carried out to help in determining the significance of these results obtained for different BU007 and BU006 concentrations using t-test values. Since pEC50 = 3.359, then p>0.05, hence there is a statistical significance between the two drugs at CE50 half maximal value. In addition, the BU007 curve reached its maximum possible response at relatively lower contractile response values than BU006 drug.

To realize the primary objective of the experiment, the two agonists, BU006 and BU007, were compared in the process of determining the most potent among them in activating the bladder muscarinic receptors. As shown the potency test carried for the two drugs, it was realized that BU007 was more potent than BU006. The analysis of the two drugs acme to a conclusion based on the findings that the EC50 of BU006 and that of BC007 were 125ug/25ml and 40 ug /25ml respectively. In the same way, their percentage measurements of the receptor occupancy required in the production of half the total response of both the drugs were 35.33% and 8.04% respectively. According to the results, considering also that the percentage measures for their receptors to produce total response were found to be 97.76% and 95.63% respectively, it meant that lesser receptors are required for BC007 in order to produce maximum response.

As a measure of potency of a drug, EC50 determines the connection between response and affinity of a particular drug on particular tissue. According to Choppin (2002), lower EC50 reflects more potency of the drug; hence low concentration was required in the production of half the total response. Choppin (2002) also illustrated that the difference in the EC50 of the same drug were attributed difference in the number of receptors, different second messenger pathways, as well as different breakdown rate of a drug on other tissues. Okamoto et al. (2002) also indicated that in the event of a piece of a very reactive gall bladder with high receptor density becomes exposed to BU006 or BU007, EC50 remained the same since receptors exceeded the required number to activate maximum response.

Okamoto et al. (2002) affirms that EC50 decreased, when drugs were broken down in a particular tissues, since less drug were required to activate sufficient receptors to produce EC50. The best way therefore to determine the breakdown of the drug in the tissues, is by considering the level of EC50 of the drug before and after the enzyme inhibitors are added. More concentration of EC50 would be required to attain half the total response, thereby changing the EC50 curve to the right. Failure to break down the drug in particular sites however made the EC50 curve to be constant. It was also found out that breaking down the drug by enzymes shifted the EC50 curve to the left since enzymes were inhibited, and less concentration of the drug are required for half achievement of maximum response (Choppin, 2002).

Lack of efficiency in the use of the computer programmes that measure contractile response, and errors in preparation of the bicarbonate solutions are some of the human mistakes that have brought inconsistencies of data. However, in the end, the experiment made a general conclusion that BU007 drug was more potent than BU006 because BU007 attained a lower EC50.