Home > Subjects > Medical > Effect of Alzheimer’s Disease on The Brain

Effect of Alzheimer’s Disease on The Brain

Alzheimer’s disease is a neurode generative disease that destroys memory and other vital functions of the brain (Alzheimer’s Association, 2011). It is a progressive mental deterioration that begins with difficulty in remembering in mild confusion. People who are affected by the disease cannot  remember essential personalities in their lives. In 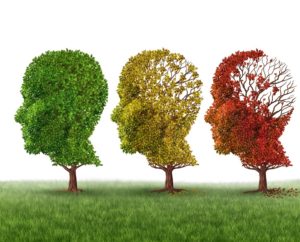 most cases, they experience dramatic changes in their personalities. Alzheimer’s disease is associated with dementia. Dementia is a brain disorder that makes an individual lose social and intellectual skills. The brain cells begin to degenerate and eventually die thus affecting mental function and memory decline.

At first, the person who is affected by Alzheimer’s disease experiences mild confusion and increased forgetfulness (Alzheimer’s Association, 2011). In the long run, the subject is robbed of his memory especially the recent ones. The primary anatomical changes that are a characteristic Alzheimer’s disease include the development of neurofibrillary tangles and amyloid plaques. Amyloid is a protein that is present in almost all parts of the body. Amyloid plaques are sticky swelling around the nerve cells of the brain. The amyloid plaques accumulate around the nerve cells thus affecting the brain functions. Alzheimer’s disease causes the protein substance to divide improperly leading to the formation of beta-amyloid which is harmful to the brain cells (Alzheimer’s Association, 2011). Beta-amyloid is toxic to the brain cells. When the brain cells come into contact with it, they begin to die.

Neurofibrillary tangles are also anatomical changes associated with Alzheimer’s disease. There are long fibers in the brain which are made of protein. The long fibers act as scaffolds which are responsible for keeping the brain cells in the proper shape. In addition, they assist in the transportation of the nutrients to the various parts of the brain cells. Alzheimer’s disease causes these fibers to twist causing the brain cells to lose their shape. In this way, they cannot transport nutrients leading to the ultimate death. Accumulation of tangles and plaques in the brain are the primary characteristic of anatomical changes associated with Alzheimer’s disease. Loss synapses and neurons are the principal characteristics of pathophysiological changes associated with Alzheimer’s disease. The synapses take place in particular subcortical regions and cerebral cortex. The loss of synapses and neurons results in atrophy which degenerates parietal and temporal lobe. Besides, locus coeruleus, cingulate gyrus and frontal cortex experiences degeneration. Alzheimer’s disease mostly affects individuals who are 65 years of age and above. Other populations who are at risk of developing the disease include individuals who have diabetes, high blood pressure, heart disease and stroke.

Alzheimer’s disease is a disorder which is associated with old age. Many people believe that aging is the primary cause of the disease. Age-related factors are responsible for the damage to the postmitotic cells that play a significant role in pathogenesis (Braak, Thal, Ghebremedhin, & Del, 2011). The pathologic process is usually selective. It develops in the minor neural types without affecting the major neural types. However, the disease does not affect all the postmitotic cells that are inside and outside the central nervous system. An enormously long prodromal period is required by the disease process in the AD. The pathologic process of AD indicates that it can manifest itself in both sexes. This is possible even without any impact which can be attributed to old age. There are nerve cells which are capable of surviving even at the age of ninety. This indicates that aging is not a precondition for the formation of tau lesions which are responsible for the AD. Some individuals are past nine decades, but their memories are still clear. Therefore, the pathological process of the AD is not dependant on age. However, it is a progressive disease that can extend to old age. As such, preventive measures are required to prevent individuals from exhibiting strong evidence of the disease.

The pathologic process is confined to the central nervous system (Braak, Thal, Ghebremedhin, & Del, 2011). It includes the formation of intraneuronal and abnormal tau protein. Besides, the beta-amyloid proteins are deposited in the CNS. The AD-related lesions start to develop at specific predilection sites in the brain and spread to other parts of the brain cells. The primary neuropathological signs of AD include neurofibrillary tangles and amyloid plaques. The amyloid plaques are made of protein fragments known as beta-amyloid which is produced from the amyloid precursor protein. The neurofibrillary tangles are made up of tau which is a protein responsible for the maintenance of the internal of the central nervous system (Braak, Thal, Ghebremedhin, & Del, 2011). Neurofibrillary tangles are formed as a result of the excessive release of phosphorylation which prevents the brain cells from performing their normal functions resulting in oxidative stress. Oxidative stress leads to brain inflammation. Continued brain inflammation leads to signs of cerebrovascular disease which affects patients with Alzheimer’s disease (Braak, Thal, Ghebremedhin, & Del, 2011).

Alzheimer’s disease impairs the cognitive behavior and ability of an individual leading to a gradual decline of the brain functions. Treating a person with Alzheimer’s disease has some benefits. Pharmacological treatment of the disease involves establishing a partnership between the patient and family members to ensure that medical care is provided continually (Jack, Knopman, Jagust, Petersen, Weiner, Aisen, & Lesnick, 2013). There is various pharmacological treatment for patients with early stage of Alzheimer’s disease which involves sharing of their diagnostic experience. The pharmacological involves administration of drugs that can be used safely with other medications to help in controlling vascular risk factors and common comorbidity. Psychological intervention and support during the early stage of the disease are one of the best pharmacological treatments that help in slowing the progression of the disease (Jack, Knopman, Jagust, Petersen, Weiner, Aisen, & Lesnick, 2013). Psychological intervention and support are of great significance to people in the early stage of the disease. It involves providing evidence-based intervention by addressing emotional well-being and cognitive functions of the subjects. In addition, it is crucial to address the behavior of the patient and provide educational support to the caregivers in the early stage of the disease to slow its progression. Psychological intervention improves the well-being of the patients with Alzheimer’s disease. Besides, their quality of life is enhanced allowing them to lead a quality life.

Clinically, random practice effects provide useful information that can be used to tell the level of the cognitive functioning of the brain and its ability to adapt to repetitive exposures. However, Alzheimer’s disease can be prevented if appropriate measures are considered at its early stage. There is strongest clinical evidence that provides information on how to reduce the risk of Alzheimer’s disease. One of such factors is lowering risks associated with heart diseases. Elements that are responsible for increasing heart diseases increases the risk of vascular dementia and AD. Such factors include excess weight, high blood pressure, diabetes and high blood cholesterol. It is also important to adopt a Mediterranean diet that emphasizes on fresh produce and consumption of foods with low content of saturated fat. Foods with healthy oil lower the risks that are associated with stroke and cardiovascular disease. Therefore, the Mediterranean diet has been clinically proved to reduce the risk of Alzheimer’s disease. Keeping active is another important aspect that can help in reducing the risk of progression of Alzheimer’s disease. Individuals who are mentally, socially and physically active lead an enjoyable life. They are not prone to the effects of Alzheimer’s disease. Currently, there are no clinically proven methods of preventing Alzheimer’s disease. However, the progression of the disease can be lowered if appropriate measures are taken.