Due to regular transfusion, iron overload in thalassemic patients may give damaging effects to number of organs including liver, pancrease, heart which may arise complication. Study was designed to see the relationship of iron overload with insulin resistance in a group of children with β-thalassaemia major. The study was included 75 diagnosed beta thalassemia major patients (40 male and 35 female) with age range 10-25 years receiving regular blood transfusion. The levels of hemogobin and percentage of hematocrit is estimated. Level of serum ferritin, total iron binding capacity, fasting blood glucose and serum insulin were estimated by standard methods. Insulin resistance was calculated by formula. Mean age of male and female was 10 and 12 years with low body weight. Blood transfusion was started at the age of 5-6 month with duration of 1-2 per month. Decreased level of hemoglobin and percentages of hematocrit was observed in both sexes. Level of serum ferritin was high in both sexes. Values of TIBC and level of fasting blood sugar was normal in both sexes. Level of serum insulin was high in both sexes where as value of insulin resistance was mildly high only in male. Positive Pearson coefficient correlation was observed between TIBC and insulin resistance and also between serum ferritin and insulin resistance. A positive association of serum ferritin and TIBC (iron over load related parameters) with insulin resistance may indicate an increase risk of developing type 1diabetes in children with beta thalassemia. It is therefore a need of regular follow-up of transfusion dependent thalassaemic patients with respect to iron overload to ensure proper management of iron overload associated complications.

It has been estimated that about 1.5% of the global population are carriers of beta thalassemia, with about 60,000 symptomatic people born yearly, especially in the developing world.  The prevalence rate of diabetes in thalassemic children is three times more than controls

Due to regular transfusion, iron overload is observed in thalassemic patients4. In iron overload condition, there is a saturation of transferrin results in serum free iron.  This free form of iron shows damaging effects as it synthesize hydroxyl radicals and accumulate in organs including liver, pancrease, heart.

In beta thalassemia, disparity of globin chains cause hemolysis and impair erythropoiesis. An enhanced absorption of iron is due to impair erythropoiesis. The reason is again the hepcidin which controls the absorption of iron, level of iron in plasma and its tissue distribution. Hepcidin also decreases the movement of iron in the blood from gut, hepatocytes, and macrophages, resulting in decreased level of serum iron. Malfunctions of the hepcidin are responsible for iron overload.

Iron plays an important role in pathogenesis of diabetes mainly due to failure of β-cell and insulin resistance.  It is proposed that increase iron entry into cells increases the process of  oxidation, and on the contrary, the metabolic fortune of glucose is dependent on the accessibility of iron. Iron overload exerts sympathoexcitatory effects related with a reduce insulin sensitivity.

Study was therefore designed to find out the relationship of iron overload with insulin resistance in a group of children with β-thalassaemia major.

The study was included 75 diagnosed beta thalassemia major patients (40 male and 35 female) with age range 10-25 years receiving regular blood transfusion. Patients were taken from local clinics of thalasssemia centre. Letter of consent was taken from the parent of each patient. Patient with any other disease were excluded from the study. Study was approved by ethical committee of hospital. Detailed data of children were entered in Proforma.

Data was analyzed by CPSS 18.0. Variables were expressed as mean±SD. Student ‘t’ test was used for comparison of variables. Correlation between variables was calculated using Pearson correlation coefficient. P<0.05 was considered as significant. 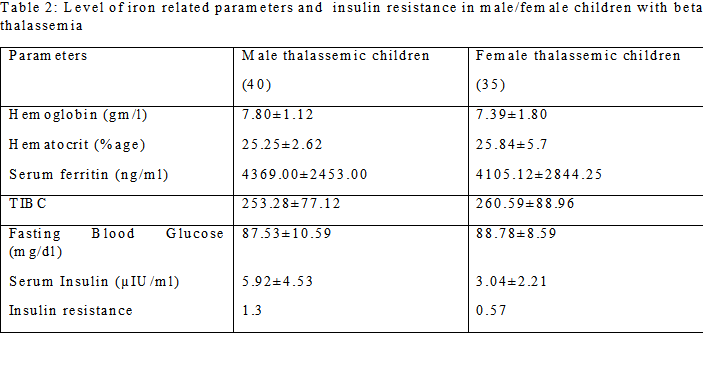 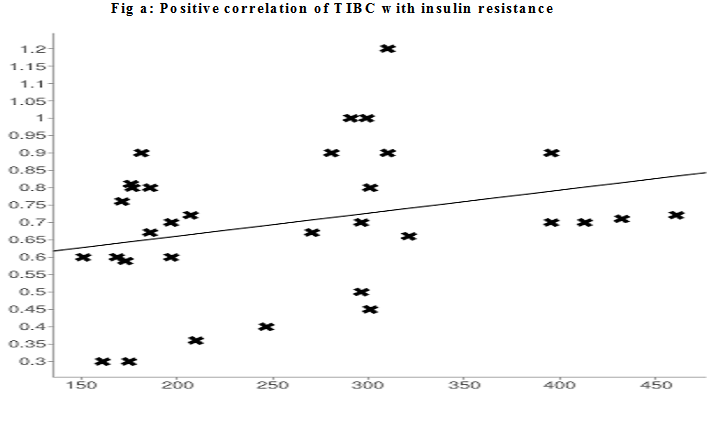 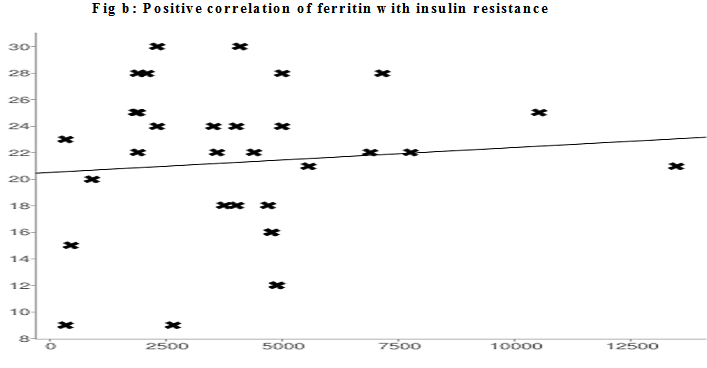 Demographics of male/female children with beta thalassemia shows that mean age of male and was 10 and 12 years respectively. Their body weight was 24 and 26 kg. Transfusion starts at the age of 5 and 6 months respectively. Duration of transfusion in both sexes was 1-2 months.

The relationship between diabetes and excess of iron was widely recognized in the diseases of thalassemia and hemochromatosis. However, increase level of iron also increase the risk of developing diabetes.

According to our study the mean age of children was in a range of 10-12 years with low body weight. Gender difference is not seen in whole of the study. It is found that beta thalassemia major was diagnosed usually in the age 2-3 years however due to iron over load multiple complications are develop and patient die at the age of 30 years due to cardiac complications.  A study is reported that thalassemic children have severe anemia. They body weight is low as compared to normal children of same age and their pattern of growth is failure to thrive and later on they suffer with jaundice. A study reported that with moderately larger spleen and deprived of growth lead to low body weight.

Our study is in accord with studies who reported low level of hemoglobin and percentages of hematocrit in beta thalassemic children. Due to these low values children develop severe form of anemia slow growth, delayed puberty etc.

Our study is inline with a study who observed that hyperferritinemia may be a feature of newly diagnosed diabetes and serum ferritin level seems to be positively associated to insulin resistance. Possible explanations of hyperferritinemia might be that by binding iron, ferritin protects against formation of free hydroxyl groups.  It could also be due to endothelial/subendothelial inflammation or simply leakage of ferritin from hepatic cells.

Positive correlation was observed between TIBC or total iron binding capacity and insulin resistance. According to a study correlation between TIBC and insulin resistance shows a negative impact of iron on insulin sensitivity. The liver increases the production of transferrin, to increase the use of iron thus raising TIBC. TIBC has been used as a marker of end-organ toxicity and also shows the response of deferoxamine therapy.

A positive association of serum ferritin and TIBC with insulin resistance may indicate an increase risk of developing type 1 diabetes in children with beta thalassemia. It is therefore a need of regular follow-up of transfusion dependent thalassaemic patients with respect to iron overload to ensure proper management of iron overload associated complications.

Isolation and Identification of Pathogen From Diseased Sample