Alfred Kinsey was born in 1894 in Hoboken, New Jersey, to a father who was an engineering teacher at Stevens Institute of Technology. His family was poor in the greater parts of his childhood and therefore he basically had a humble upbringing. After graduating from Columbia High School, Kinsey was faced with a hard decision since his father insisted that he should pursue a course in engineering at Stevens Institute. Nevertheless, two years into his degree course, Kinsey considered engineering to be outside his passion. For that reason, he got a transfer to Bowdoin College, Maine to pursue a course in biology, specifically entomology. The choice to take entomology would later prove to have been instrumental in the contributions Kinsey made in sexology (Brown & Fee, 2003). Kinsey married in 1921 and the marriage resulted to four children. In terms of his sexuality, Kinsey was bisexual and his relationship with his wife Clara McMillen included the understanding that they could both have sexual relationships with other people and with each other.

Widely regarded as the most significant sex researcher in the history of sexual development education, the entomologist Alfred Kinsey wrote two prominent books on the nature and characteristics of human sexuality. The first was Sexual Behavior in the Human Male published in 1948 and the other one was Sexual Behavior in the Human Female published in 1953. Kinsey also played a major role in the founding of the Institute for Research in Sex, Gender, and Reproduction (now named in his honor) at Indiana University. 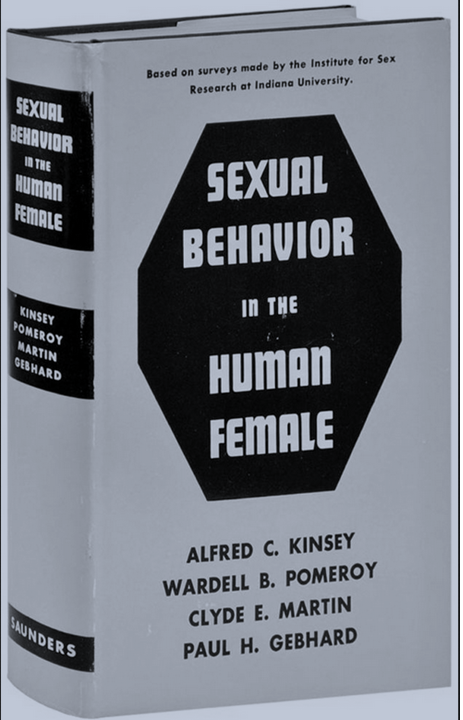 The release of the Sexual Behavior in the Human Female in 1953 almost brought to a halt Kinsey’s research work because he had allegedly offended thousands of Americans and the U.S. congress put Dean Rusk (the in-charge of the Rockefeller Foundation) under immense pressure to unilaterally terminate the monetary support of the institute.

After being unsuccessful in reaching the necessary level of funding from other sources, Kinsey regrettably gave up his amazing efforts that transformed sexuality research. Nevertheless, the institute carried on and is still running as an autonomous organization under Indiana University and it currently named ion honor of Alfred Kinsey. Alfred Kinsey passed on at the age of 62 years on August 25, 1956 due to a combination of a heart ailment and pneumonia.

In 1916, Alfred Kinsey earned a B.S in biology and psychology which further earned him a listing in a doctoral program in zoology at the Harvard University where he earned Sc.D. in 1919. After taking a teaching position at Indiana University’s department of zoology, he continued there for the rest of his career. While Kinsey mainly focused in and even carried out researches that became a pivotal point in the field of entomology, he also developed interest in the field of psychology, more so human sexuality, which bore fruit when Indiana University publication (the Daily Student) through an editorial called for extensive information relating to and testing for sexually transmitted infections. Venereal diseases were a serious problem that had then just stormed the United States.

Kinsey applied for permission design noncredit course on the subject of marriage with approximately hundred registered participants, in which a number of issues with reference to sexuality were dealt with. Almost immediately he stopped his research on gall wasps and focused entirely on human sexuality. His projects and research studies obtained funding from the Rockefeller Foundation. Following this, the National Research Council set up the Institute for Research in Sex, Gender, and Reproduction at Indiana in 1942 to enable the continued research in human sexuality. He carried out interviews from 5,300 males and 5,940 females which became the basis of his revolutionary works. His study findings about male sexuality was published and released in 1948 which sold over a half million copies. The study findings for female sexuality were printed five years later in 1953, nevertheless to a less warm reception.

Through the various interviews Kinsey conducted in conjunction with his associates, he was able to gather about 18,000 individual records between 1938 and 1956. Through the application of personal interviews Kinsey and his associates were to intermingle directly with the participants thus enabling him to gather an extensive record of their sexual account and background. The span of the information collected during these interviews was bolstered for the reason that Kinsey and his associates had the ability of encouraging subjects to elaborate on and divulge the whole of their past sexual experiences (Brown & Fee, 2003). However, Kinsey mainly focused on sexual behaviors as opposed to the motivation or meaning of the sexual behaviors to the participants or interviewees (Brown & Fee, 2003). This mirrors the behaviorist strategy that Kinsey employed in examining sexuality.

Through the numerous interviews he conducted, Kinsey was able to dispute the notion that women were asexual beings. In its place, his findings on women established that women were sexual beings who had the ability of enjoying sexual activity and eventually achieve orgasm. Among the female participants that went through his interviews, 25% of the sample had attained orgasm by age 15, more than 50% had achieved orgasm by age 20, and 64% had achieved orgasm before marriage (Brown & Fee, 2003). Kinsey also involved married women in the interviews to establish the amount of time they considered necessary in order to attain orgasm with their husband. From the findings, about 2 in every 5 married women (about 40%) had achieved orgasm within the initial months of marriage whereas 67% had realized it within the first six months. By the end of the first year of marriage, three-quarters of married women had realized or experienced orgasm.

Another issue that Kinsey gave substantial focus in human psychology is the impact social class has on the various types of sexual activities that women engaged in. He established that an individual’s social class had a significant effect on the types of sexual behaviors that would be showed by women hence the nature of activities these women would participate in (Brown & Fee, 2003). Women’s social class was found to have an impact on two areas of sexuality: extramarital sexual activity and homosexual relations. Women in the lower-class cadres had less likelihood of engaging in extramarital affairs than their upper-class counterparts. On the other hand, women in the upper-class cadres had higher likelihood of engaging in same sex affairs (homosexual relations) than women in the lower-class cadres (Brown & Fee, 2003). Moreover, Kinsey’s research undertakings greatly contributed to the understanding and findings that social class did not have any significant impact on other areas of women’s sexuality such as premarital sex, night-time sex dreams, masturbation, and matrimonial coitus.

Another issue that Kinsey investigated was how sexual behavior of humans was susceptible to changes or dynamics in the historical atmosphere. In his research undertakings, Kinsey established that the susceptibility of women’s sexual behavior to dynamics in the historical atmosphere was greater than men’s sexual behavior hence men’s sexuality changed less as a result of changes in the historical atmosphere than women. Moreover, Kinsey also developed a way of comparing female participants’ sexuality with that of their mothers; by focusing on comparison of women who became of age after World War I to their mothers. In that kind of comparison, Kinsey established that the women who entered adulthood after the war exhibited a greater prevalence of extramarital sexual affairs, premarital sex, night-time sex, dreams, masturbation, and marital coitus (Brown & Fee, 2003). Homosexuality emerged as the only area of sexuality that did not have a considerable incidence rate. Even though women were exhibiting an increased participation rate in a range of sexual activities, they did not illustrate an improved frequency of taking part in these activities. To explain this, Kinsey attributed the higher prevalence to a number of factors which included the Progressive campaign to counter prostitution, the notions developed by sexual modernists such as Ellis and Freud, and the liberalizing impacts of World War I.

Alfred Kinsey had a fascinating childhood that transformed into an individual interested in biology hence the focus on studying mating habits of gull wasps. After changing focus to primarily concentrate on sexual behavior of humans, the greatest achievement and contribution Kinsey made in psychology was broadening the understanding of human sexuality with specific reference to how he transformed the understanding of a woman’s sexuality and sexual behavior. The research undertakings Kinsey carried out were instrumental in psychology because at that time not there was little understanding of what human sexuality was all like and more so on the basis of sexual behavior of women.