Home > Projects/Reports > Adaptation and Barriers Among Immigrant Families in US

Adaptation and Barriers Among Immigrant Families in US

Immigrant Families in the United States

Immigration means to travel from one place another due to any serious reason. People mostly migrate from one area to another due to employment reason, due to educational opportunity, due to change their habitat or any other specific reason etc. Here we are going to discuss the families who have migrated to the United States because of lack of facilities in their previous habitats like education, employment, health etc. The families who have migrated to any other cities or countries they sometimes have to face too many problems in order to accept the atmosphere of that place.

According to a survey about 12.5 percentage of the total population, almost 40 million people are immigrants in the U.S. It is very difficult to conclude all the problems at one time because different people have different issues related to them in their stay. Although the U.S has made now many strict policies related to the migration of people because too many immigrants have caused problems for the residents of that country, but still people are migrating there. Here we are going to discuss some of the problems, which are more common to each of them. 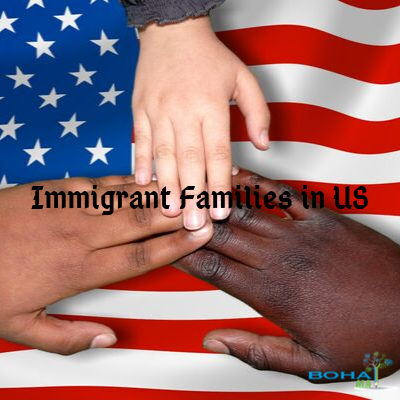 Acculturation is actually the involvement of a new culture in the existing culture. The people who migrated from one place to other have different cultures, which they follow in order to celebrate their cultures and norms. The U.S immigrants have to face this problem because the U.S has different culture and beliefs. Adaptation is to adopt or absorb the atmospheres terms according to the conditions they are already being made by the government of that country or state. Immigrants have to adopt the culture and atmosphere of the U.S whether they like it or not. In the start, they have some issues regarding this but now they are adopted by that.

Some peoples do not know the language spoken by the U.S, which is English. Many people when they migrated were unaware of the English language because they are from Russia, Japan, U.A.E or any other country. Their national language there was different so they have to face too many problems in the communication with the habitats there. This barrier is the first problem came for those immigrants as all the dealings and conversations are done in the U.S in the English language. Therefore, they have to learn English in order to adjust themselves properly and completely in the U.S as this are necessary.

Every Country has its own social circle to which they are following from start of their residence there. The immigrants who came may be lived in a different social culture in its state or country so it is essential and important for the immigrants to follow that social circle which is already maintained there by the government of U.S. that is very strong and managed. Although the immigrants have, a social circle they must merge themselves in order to be comfortable in the U.S atmosphere or social circle. The social life is somehow very much important for every citizen to maintain as it is a common trend now a day which keeps people active and aware of the surroundings of it.

These are the relationships that are created among the generation who have migrated or who have already lived in the U.S. The relationships may be worse because the people have different and open-minded which could be a great problem for the immigrants because they going to accept that by hook or by crook. They have to make and maintain a harmony among all their relationships which they already have or which they made new here in the U.S. With which they can live successfully here.

Conflict and Change in Marital Relationships

Some immigrants have to follow the poor housing issues because there is already very much space is occupied by the habitats of the U.S so immigrants have to compromise on the style of housing orthe space whatever they are given by the U.S government to the immigrants. They do not have their choice unless they earn a lot of money to buy a new one for them. The houses allowed or issued to them are mostly not enough for their families to adjust but they have to compromise on it as they have no other way or no other place to live in the U.S.

Lack of Familiarity With U.S. Norms

Immigrants have to follow the Norms or cultures, which are maintained and set by U.S government whether they like it, or not. Immigrants are used to with the norms of that state from which they have migrated. If they do not follow the Norms of U.S then it became very difficult for them to survive in U.S. U.S have very different and difficult or complicated Norms as they are made according to their culture or traditions which are not easily acceptable by immigrants at first. They have to manage it very hard to get fit according to their norms.

Sometimes immigrants do not migrate with their complete family as they do not have too much finance to migrate at once so they migrate one by one. Sometimes two persons of one family migrate first they settle down and make ways possible and easy for their other members to come in that state or country. In the U.S, the residence is very much expensive. People have to pay a huge amount of house rent to the Government or the owners of the houses. If they are hostel zed there then fewer amounts will be charged from them. Mostly the completion of the family takes a very long time to accomplish. (Fix, Zimmermann, & Passel, 2001)

Illegal Immigration in the USA