The company Aardvark Corporation has focused or predicted the revenues and expenses, in order to meet the newly signed contracts, there is also focus on the planning and expansion of the project. Therefore, the feasibility is checked and capital budgeting technique is applied to check out that the project is to be discarded.

Aardvark Corporation for the enhancement of the project that is signed can focus on a sufficient option, as there can be the three alternatives to the capital structures that include the equity, long-term bond, and the financing source.

For the evaluation of project or to focus on the desirability of the project, that it should be accepted or reject. The WACC is used in the three available capital structures for the calculations:

The WACC is given below, as the existing return rate of the company is mentioned, WACC data and the NPV analysis, indicates the negative figures, the company is going in a loss, therefore, it is recommended to reject the project.

In the Eastern Washington there is the small company known as Aardvark Corporation, however, the company is in the commercial and military airline industry; therefore, it produces the avionic parts and the equipment for that purpose. Moreover, the company had won the contracts and thus, the company is planning to do the expansion project and for the expansion, there is need of the total $92 million for the initial investment. In this way, a company can start with the installation of the equipment. After that, the company would sell the scrap value of $6 million, for the expansion of the project, there is need of the 30 million dollars in order to make the building for the production facilities, 13 million dollars of the building is expected in the end of the ten years.

The company Aardvark needs to focus on the long-term debt and the equity options, in order to expand the project. However, there could be the three options example, the expansion project by 9% from the financing debt and 90.51% from the equity. However, another option could be 50% from the financing debt and 50% from the equity. The third option could be the entire funds can collect the finance through the source of equity. However, the market data was collected through focused on T-Bond rate 6.8%, book weights, the market risk premium of 7.5%, the Beta 1.18 and the long-term bond of current yield on 6.5%. 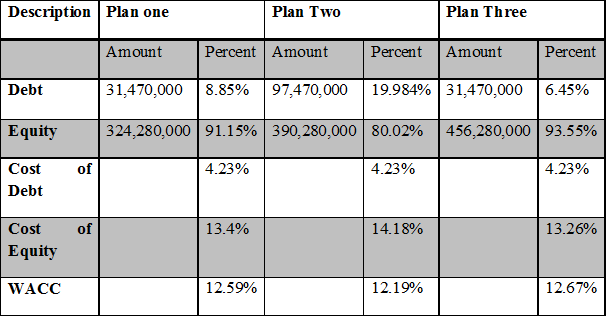 The project just not needs to be profitable but it should be feasible, as the project need to generate the higher return and it could be done by raising the equity and the debt. WACC has the three options and the existing discount rate focus on the project with the 15%. The existing rate should be focused on the lenders and investors and there is the need to focus on all the aspect before deciding in conclusion.

The Aardvark plan is higher in the risk with the WACC, however, lower the existing discount rate from few points, because the 12.59% WACC has determined the negative value of NPV. Example the negative NPV we obtained is (5,657,656.46). Therefore, the project should be rejected because, with lower WACC, the project is unacceptable.

There is another plan of the common equity example, the company can finance its new project through the common equity, and still, there are the perceived risks in terms of the stock and the market risk premium. However, the company does not have the control on the money as the change in the capital structure can effect on the cost of equity, on the cost of debt and the WACC. The WACC or the NPV analysis is negative (6,132,604.94). Therefore, Aardvark can suffer the loss and especially if there is involvement of the 100% through equity finance. If the capital structure is different than the project will be still rejected.

For the three planned capital structure indicates, the WACC was calculated, however, the project need to be rejected because every financing option that is considered have demerits. Changing in capital structure cannot add the value in the project but there could be the increase in the cost. However, the optimal capital structure needs to focus on the fund’s example debt financing that are in the ratio, example, 80% of the debt and 20% of the equity. Moreover, there could be better options than equity; cheaper source can include the tax deductibility options. Thus, through this, there will be the positive NPV and from 9% to 10% the cost of capital can be minimized and there can be positive impacts on Aardvark.