Home > Projects/Reports > What Were The Causes of The GREAT Depression

What Were The Causes of The GREAT Depression 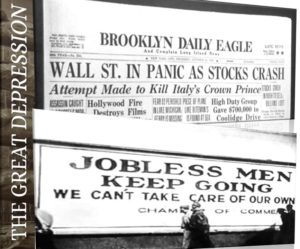 The industrialized western world faced the longest and severe depression in last century. It was worldwide economic downturn which started in 1929 and lasted until 1939. It started in America, and its consequences were visible in the whole world. In the USA, the great depression is considered as the second gravest crisis and in October 1929, American stock market crashed which initiated great depression in the USA.

In this time span, real GDP fell about 30% and industrial production declined by 47%. Most of the observers agree that unemployment rate was very high in these years. As most of the businesses were getting closed and banks were failing, around 15 million Americans were unemployed. Industrial production and foreign trade decreased and unemployment increased in the whole world.

Herbert Hoover was president of USA when economic downturn started. He underestimated the seriousness of the crisis. Misguided government policies, financial panics, and a decline in consumer demand were the reasons for the economic downturn in the USA. By spring 1933, US economy began to recover and it fully recovered by the end of 1942. Economic institutions, economic theories, and macroeconomic policies were changed after this depression. (Roathbard)

Causes of The Great Depression 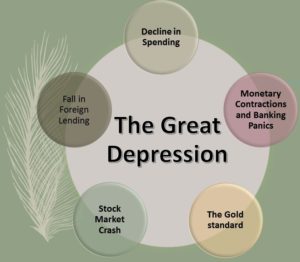 In the late 1920s, the market became increasingly speculative. This decade was considered as a prosperous decade and stock prices were very high. Interest rates were increased by Federal Reserves to slow down the increase in stock prices. This step resulted in less spending in automobile purchase, construction and other such fields. Subsequently, it decreased the production. US stock prices were so high that no one could give reasonable anticipation of future earnings. Investors lost confidence when there was a minor decline in stock prices. The stock market bubble burst as investors started panic selling.

October 24, 1929 is known as “Black Thursday”. Many stocks were purchased on margin, which forced investors to liquidate their investments. This exacerbated the fall in prices of the stocks. US stock prices declined by 33% between September and November. This dramatic decline is often termed as the Great Crash of 1993. (Kraner)

Market crash directly affected the consumers. American aggregate demand was reduced because of the market crash. Business investments and purchase of durable goods were decreased sharply. People were insecure about future incomes which resulted in the decline in purchasing of durable goods. This behavior resulted in rapid decline of real output of USA. (Romer)

The major reason behind great depression was the decline in aggregate demand or in other words decline in spending. People were insecure about future earnings which made them careful about spending. The spending level was very low throughout the depression.

Demands for goods dropped but industries were producing more than people could afford to consume. Industries were forced to decrease their production which increased the unemployment. Moreover, stock market crash decreased people’s power of purchase. At the start of the depression, money supply or money in circulation, shrunk. This was a major setback for industries. (Romer)

Banking panic started when account holders asked banks to pay them in cash because of lack of trust. In fall of 1930, banking panic wave gripped the banks of USA. Typically banks only have a fraction of total deposits as cash reserves. Banks need to liquidate loans in order to generate that much cash. Hasty liquidation can lead a bank to failure. By 1933, almost one-fifth banks which were existing at the start of 1930, had failed. (Romer)

Many economists think that Federal Reserve Bank wanted to preserve the gold standard that’s why it allowed a huge decline in money supply. It is said that Reserve Bank expanded hugely in response to banking panics, in order to ensure that trust in American’s commitment to the gold standard is not broken. This was a major reason behind transferring American decline to other countries. Others countries were forced to deflate with the USA .So, the value of banks was reduced which made them more vulnerable in order to follow the gold standard. (Romer)

Why did the Great Depression last so long?

The Great Depression lasted for more than ten years. It started in 1929 and ended in almost 1942. The economy didn’t prosper after the depression which usually happened in other cases. Most of the economic historians believe that World War 2 was the reason behind the end of this depression because it helped in reducing unemployment.

Many people believe that initially, President Hoover didn’t take this depression seriously. He didn‘t come up with effective policies to stop this depression quickly. His inefficiency might be a reason that great depression lasted so long.

Two UCLA economists, Harold Cole and Lee Ohanion, suggested that President Franklin D. Roosevelt was responsible for dragging this depression for such a long period. These two gentlemen blamed the anti-competition and pro-labor measures which Roosevelt signed into law in 1933. They wrote that President Roosevelt thought that excessive competition reason behind depression. So, President came up with a package which was related with the businesses and labor pays. These two economists concluded that economy could’ve recovered but these misguided policies didn’t let that happen. (Sullivan)

Misguided policies were the major factor behind dragging this depression for such a long period. National Industrial Act also didn’t help the cause. It was implemented to help recovery process but unfortunately, it didn’t. Harold Cole and Lee Ohanion suggested that New Deal labor and industrial policies prolonged the depression. (Sullivan)

The Great Depression is considered as very tough and dark time for global and America’s economy. Humans suffered a lot because of this depression. As the unemployment ratio increased, the standard of livings also changed. The Depression also changed the world economy in different ways. There were several reasons behind this depression. The Great Crash, decline in spending, monetary contractions, banks failure and the gold standard are some of the reasons. Many economists believe that government’s policies were the main reason behind dragging this depression for such a long period.