Home > Projects/Reports > What is Skydiving 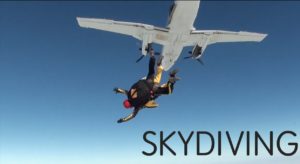 Skydiving refers to the method of transition from a high point to the surface of the earth using gravity. Usually, it involves the control of the speed as one descends normally with the aid of a parachute. In some instances, it involves a free-fall, during which the parachute is not deployed. The body of the skydiver at this time does the acceleration to a terminal velocity. Skydiving has had a long history and it is one of the breakthroughs of human innovation. The first skydiver in history was done as early as the 18th century, when one Andre-Jacques invented a parachute. He tested his work by leaping 3,200 feet above the ground in Paris. At the time, he made use of a hydrogen balloon. While a lot of changes and advances have been made in this area, Andre-Jacques can be said to be the pioneer of skydiving. He opened up a window of opportunities for others to develop even better and more modern parachutes. His invention does not resemble the skydivers’ parachutes that we have today. Skydiving has developed today to find application in many areas. The military has adopted the use of the technology to save individuals on board (aircrew members) in emergency situations. They have also been used in many places by the military to deliver soldiers in a battlefield. It is, therefore, imperative to underscore that skydiving is not just a sport, but an activity whose applications have saved lives in situations where many would have succumbed.

Skydiving is commonly performed as a competitive sport and recreational activity across the world. However, due to its nature of diving from many feet above the earth surface, it has been considered as an extreme sporting activity. Many risks or safety issues may arise as a result of this sport. Notwithstanding, airborne forces have been deployed by the use of skydivers. Supplies are also delivered in cases of emergencies. Furthermore, special operations forces do employ skydivers. In some instances, the forest firefighters also referred to as the smoke-jumpers have also used the technology in the United States. The airborne forces have helped a great deal, especially in those areas considered inaccessible due to poor infrastructure. In the contemporary world, the most popular means of escaping a distressed aircraft is through the use of this technology. It is operated by a crew member, the pilot, or passenger himself. They engage the activation device physically. The seat is then propelled outside and away from the aircraft. It carries the occupant through a rocket propulsion or explosive charge. The ejection seat will then use the technology of skydiving to shove the occupant to safety.

Due to the possible dangers associated with skydivers, individuals are expected to carry two parachutes. There is a high perception that this is an extremely dangerous activity. It is important to note that about 20 people die every year as a result of the fatalities in every 150,000 jumps. This translates to about 0.00067%. It is due to these fatalities that the skydivers are supposed to use two parachutes. It is critical to always inspect and repack the reserved parachute whether in use or not. Most of the fatalities that occur happen as a result of unsafe man oeuvres and errors committed while flying. The divers need to swoop at high speed parallel to the surface while they land. The changes in the condition of the wind can also pose serious risks, especially strong winds. Canopy collisions may also result into serious fatalities. Top of Form