The research has analyzed that development patterns of Colorado Spring State are increasing in recent years; there 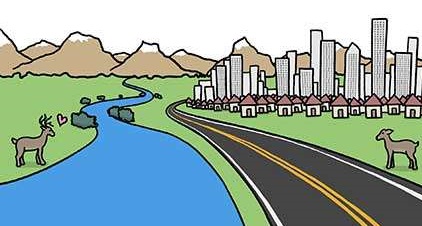 are planning of still growth so the state could be healthy and happy. The state is moving towards the urbanization so the lives of the people, lived there could be better.  Colorado is continuing towards sustainability so I also believe that the state can suffer urban sprawl. The research has shown that the communities are willing to change their lifestyles so they can be more connected towards walkable and obesity problem could be reduced. There are many characteristics of new urbanism in the state, so there are greater chances of urban sprawl, Colorado Spring can make initiatives that how to get safe from urban sprawl, which is predicted to increase in recent years, there could be laws that support new urbanism and make the state safe from the urban sprawl.

Aurora, Colorado can also suffer from the urban sprawl as there are also projects for the new urbanism, however, the state has the high dessert climate so there are fewer chances of urban sprawl. Moreover, no one is assuring about the situations because the state is motivated and continuing towards development and betterment of the nation. There is already refugee population in the Aurora, Colorado so the risks are more of urban sprawl. Aurora, Colorado is rich in natural areas; there are parks so people could be attracted towards the state. The state has the place, which is not in use, so new communities need to be allowed in the state for few years, the actions could be taken when state notice that urban sprawl could be there.

What is a Work Breakdown Structure (WBS)