Trump Accelerate US Embassy to Israel

Donald John Trump born in 14th June 1946 is the 45th and current president of America since 20th January 2017. Before president he was a businessman. According to Forbes magazine, he was the world’s 544th richest person as of May 2017, with an estimated net worth of $3.5 billion. 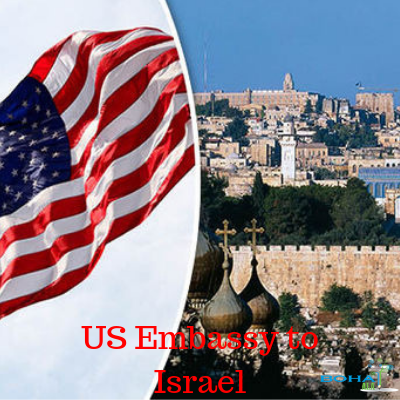 Till the time trump started his president ship he is being criticized because of his many policies related to country’s interest. One of his policy which he was about to implement but before implementation of this policy it is too much in critics in all of his management team and overall the world infect which is “Moving U.S Embassy to Israel”. Trump keeps on his decision whether they are wrong for others for state even he has a motto “I wanted to do it and I will do it”. When he get elected by people he said them that I will do everything which would be only beneficial for the country America and he thinks that moving our U.S embassy to move to Israel. Trump thinks that this decision will enhances the relationship between these two countries strong. He has made Jerushilm the capital of Israel before ordering the relocation of U.S Embassy there. This decision of trump has disturbed the peace and comfort level of not only of American white house, Americas parliament and other politicians authorizations this decision also disturbed the other states policies and strategies for their states and countries because it had never been happened before that Israel is going to be a place for someone’s embassy because it had security issues which is the big problem for having an embassy there. This decision of trump is not also being accepting by other peaceful states who has linked with America in terms off aid or any other terms mostly countries are linked with America in terms of transferring technologies, transferring food and beverages items in terms of shortage air wrong growth, in terms of needing clothing, transportation needs, exports and imports of valuable items, most of the countries even share the methods of teaching of America as well as the course outline of the state because of great worth of his course outline whole around the world specially in the countries who are less developed and less populated, has less resources to survive best in the society they mostly depends on the America for aid and help. This moving decision of trump is declared so much wrong because in this decision many of his parliament leaders didn’t signed the agreement bur trump will implement it whether any one sprees or not. Other than trump’s decision no other country has an embassy in Israel due to high security risk for his employees who work there. One more important thing is that Israel annexed east Jerusalem, which contains most of the important holy sites of MUSLIMS, Jews and Christians as well after the war with Arab in 1967. This also creates a dark image of Israel’s administration. Trump’s administration use to give an explanation on this decision that we are not finding any prospective location for U.S embassy which they are shifting from Tel Aviv due to security risk. This decision is in just papers by the time which are signed by the president and it will take 3 to 4 years to move because this decision has many critics and controversies in it which take too much time to be resolved from other states also because this is not a single person decision or not a single person’s work to move to there.