Every other person’s dream would be to become reach, but the question is that how one can become rich and this book has tried to answer this question. The author Napoleon Hill has used various advises for life as well as career, and most of them are derived from the idea of his mentor, Andrew Carnegie. He has suggested lots of good things for people to know that how they should think in their life and what will grow them as a rich person. There can be people, who are stuck on their professional ladder and don’t know that how to climb up. Napoleon Hill has provided some insightful information for such people to get ahead in their life and career. He gives utmost importance to the thinking style & patterns of people. I liked one quote from the book which states that

“Every man is what he is, because of the DOMINATING THOUGHTS which he permits to occupy his mind”. 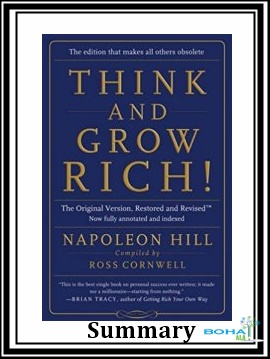 The above mentioned quote tells the real perspective briefed in this book. It says that people are dominated by their thoughts, and so their thought process is important for their success. If someone is dominated by the thoughts that he can’t get rich ever, then it is most likely that he will never get rich. Moreover, the book explains in detail that one should not get worry due to any failures in life. There are people who get trapped in their failures, and never be able to get out. The people who become rich in their lives are the ones, who faced some failures at some point in their lives, but got over those failures, learned by mistakes, and moved forward. The author asserts that one should have faith in his/her abilities and follow envision ensuring that he/she chooses the right path of becoming rich. People should be passionate, disciplined, positive, and aspiring, and then no one can stop them from growing rich.