The Salem trials began in 1962. Several women and men were accused of illegal practice of witchcraft. The 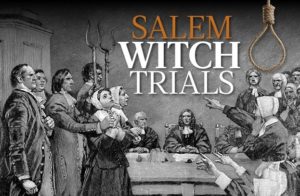 individuals who were charged were residents of Salem Village in the Massachusetts Bay Colony. The first women to be accused of the illicit practice of witchcraft were Sarah Osborne, Sarah Goode, and Tituba. These women and men were accused of witchcraft following the mysterious maladies experienced by Elizabeth Parris and Abigail Williams. Tituba confessed to the crimes after being coerced by the authorities. After she had admitted to the crime, Tituba asked the authorities to seek for more witches living in Salem. The doctor also confirmed the mysterious maladies experienced by Abigail Williams and Elizabeth Parris. She concluded that they were suffering from the effects of witchcraft. Several residents from Salem Village were corroborated into the crime. Apart from the girls, there are other members of the community who had experienced the effects of witchcraft. Salem residents afflicted them together following wide accusations of individuals engaged in witchcraft. Following these incidents, several other middle-aged women and men including a four-year-old child were incriminated of witchcraft and arraigned in court for trail. Other people from the surrounding villages were also implicated in Satanic practices. After these incidents, a special court was convened in Salem Town to hear the cases of individuals who were accused of practicing witchcraft. Therefore, the women and men featured in Documents 14-75 were accused of witches after a group of young girls from Salem village claimed of being possessed by the devil.

The Salem witch trials took place between February of 1962 and May of 1963. Over 150 men and women were accused of practicing witchcraft in the Salem village and the surrounding villages. At the end of the trial, 19 people were executed while other died in prison waiting for their trial or execution. Much of the convictions and accusations were generated from the infamous incidences of mass hysteria which had been witnessed in American history. Much of the evidence utilized by the prosecution was based on Puritan superstitions. Puritan superstitions were the primary contributing factor to the trials. The fears were common in the Puritan society. The members of this community believed that the presence of Satan in Europe had spread to the Colonial America. The people of the Colonial America believed in the existence of evil spirits and demons. This belief was a confirmation that God and angels existed. Therefore, the superstitions and the presence of supernatural power were the primary cause of the Salem witch trials.

Various types of evidence were considered during the trials. For instance, spectral evidence which consisted of testimony was used. There are some who argued that Satan was in a position to afflict anyone. On the other hand, there are those who argued that Satan had to seek permission from the person whose shape had been assumed. According to the court ruling, spectral evidence was admitted. Effluvia were also used as a source of evidence. Effluvia is a theory that was based on the concept that witches could be confirmed by tests performed on the suspected victims. There was a test which was performed on the cake. The cake was produced using the urine of those who were suspected as victims. The cake was then given to a dog to consume. The alleged victim would only be found guilty if he or she cried out in pain. Another effluvia test was based on touch. In this case, the suspected victim would cease suffering when he or she became in contact with the witch causing the affliction. Confessions and direct testimony were also used as evidence. The accused were allowed to name other people who whom they suspected of witchcraft. The presence of witch teat on the body of the alleged victim was also considered as evidence. Moreover, the presence of books, astrology or palm reading was used as evidence of guilt.

Village and town relationships played a significant role in witchcraft accusations. Majority of the allegations took place in Salem Village. Such accusations revolved around property lines, grazing rights, and church privileges. The neighboring towns considered Salem village as problematic. For instance, they hired independent ministers to serve in the village. They failed to support the adjacent towns including Salem Town.

The defendants helped their access by their behavior under examination. During the trails, some of the suspected victims confessed and named other people whom they believed to have satanic powers. In May 1692, eight girls from Salem village were enchanted by people whom they had never met. They could explain how they had observed several heads of cattle freeze to death. After the formation of the court, they provided a prophetic direction that would enable the community to identify the witchcrafts. The predicted that the suspect would cause a woman to levitate or topple a child. A few minutes later, the feet of the victim rose from the floor. Their prophetic directions allowed them to identify other sixty people who practiced witchcraft. In this case, several of them were jailed while others hanged to death. Therefore, the behavior of the defendants helped the prosecution to identify and ascertain individuals who practiced witchcraft.